The Swedish company is rolling out its new “Take Care” concept — an invitation to "refresh, repair and remake" one's wardrobe — to mark the June 20th opening of its core brand’s largest store in France on Rue La Fayette in Paris.

Now that physical flagships are just one of many touchpoints in a customer’s journey, even a fast fashion giant like H&M can’t hope to make a splash merely by opening a six-storied and 5,000-square meter superstore, even if it comes with a spectacular glass canopy with a view on the roof top and its green wall, a stone's throw away from iconic Parisian department stores Galeries Lafayette and Le Printemps. Instead, like many retailers, H&M is betting on immersive experiences and "retail-tainment" to attract customers, in particular millenials, among the most sustainability aware shoppers.

The historic building, which stocks H&M’s entire range of products, also hosts two repair and customisation stations, along with a new line of environmentally friendly washing detergents, stain-removing sprays, cleansing wipes for sneakers, and a washing bag preventing the dispersal in the water of plastic microfibres shed by synthetic material. Clothes made from recycled fibres are on display near a used garment collection point. The brand also plans to use the store to stage exclusive events, including new capsule collection previews, for members of loyalty program H&M Club. 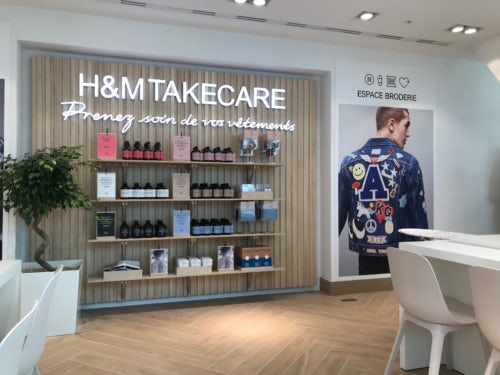 By introducing such new products, experiences and services in eye-catching flagships, H&M Group is aiming to revive foot traffic to its core brand’s vast network of stores, while also expanding online, where the company has ceded ground to digital competitors like Asos and Boohoo but is planning further investment. E-commerce amounted to 12.5 percent of the Stockholm-based group's total sales last year, reaching SEK 29 billion ($3.66 billion), and is expected to grow by 20 percent per year, hitting $9.46 billion in 2022.

But after more than two decades of tremendous growth based on geographical expansion, the H&M brand’s enormous network of brick-and-mortar stores, accounting for 9 out of 10 retail locations of the Swedish group, is struggling. In 2017, H&M launched a review of its store network, leading to the closure of 170 stores this year, including H&M’s store on Boulevard Haussmann in Paris, not far from the new Parisian flagship. Friday, the company reported flat second-quarter sales (including VAT) in local currency. And analysts are cautious about the company’s half year results that will follow on June 28.

"Flagship stores play an essential part in a smart omnichannel strategy, that is critical to bring inspiration and services to our customers in a beautiful interior, easier to shop in," Thomas Lourenço, the CEO of H&M France, told BoF. He declined to disclose the scale of the investment in the new Parisian flagship, which required 14 months of intensive works, but he expected "huge traffic" fuelled by local shoppers and tourists drawn by tax-free shopping at nearby department stores. "At H&M, we are not necessarily racing to enlarge the format of our stores," he added. "We think big to get enough room to show who we are and to be able to create exceptional things that you can't see anywhere else."

For Yves Marin, an expert in retail at the French consultancy firm Bartle, the former one-size-fits-all approach is definitively over for fast fashion retailers. "These groups will increasingly rely upon some very emblematic or even delirious stores in the busiest shopping areas of big cities, whose halo effect will benefit the brand’s activities overall. They will keep their smaller formats for local interaction with customers as, for example, pick up or return of online orders."

Other significant innovations embedded in the new Parisian flagship are invisible at first sight. The store will “benefit from the latest technologies (big data, information systems, RFID) for an optimisation of the supply chain management, making it possible to be more rapidly effective and finely tuned with customers’ requests regarding trends, models and sizes,” said H&M France in a statement.

We think big to get enough room to show who we are and to be able to create exceptional things that you can't see anywhere else."

In recent months, the group led by Karl-Johan Persson has failed to align supply and demand as successfully as competitors, which have built highly responsive, ultra-fast supply chains. “Imbalances in the H&M brand’s assortment composition” resulted in $4.3 billion of unsold clothes at the end of the first quarter. Analysts at Crédit Suisse wrote in a note to investors earlier this month that "the consequence of H&M trying to trade itself out of trouble is that the acceleration in discounting and promotions over the past two seasons must be having an impact on customer perception of the brand. This feeds into a vicious cycle of weakening full price sales, higher inventory and even more promotions."

Radio Frequency Identification (RFID) tagging of garments will be introduced at the Rue La Fayette store in 2018, "allowing us to know in real time what we have in-store and give the right information to our customers," explained Lourenço. And algorithms are increasingly helping the Swedish group to analyse store receipts, e-commerce orders, returns and loyalty-card data to anticipate trends and to ensure it is providing what customers actually want.

"Artificial intelligence capabilities can give retailers a competitive advantage to speed up the inspirational design phase, help designers and fashion houses better personalise offerings and meet customers' expectations of customised design," said Bernard Sfeir, a partner at AT Kearney.

It is too early to say whether consumers actually want a “customised” merchandising mix, but it’s clear that H&M, which monetised the rise of globalised fashion tastes for more than two decades, has to better contend with the emergence of fashion tribes born from the dissolution of the mass market into a mass of niches. To its credit, the company has put imagination and resource into launching more targeted offerings, like & Other Stories, Arket and Nyden, a platform “putting tribe leaders at the centre of the design process.” 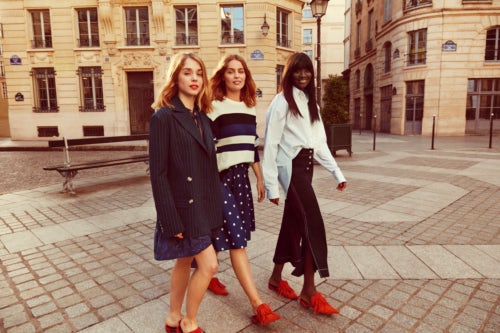 The feedback from French customers will serve as a test for H&M’s new initiatives. But Paris, with its highly fragmented apparel landscape, is representative of many of the woes H&M is facing in a mature market.

When not reducing their expenditure on clothes in favour of technology and experiences, “French customers turn to lower-priced brands like Primark or Kiabi or to Zara’s more fashionable offering — but shopping is also fast moving online,” said Hélène Janicaud, Fashion Business Unit director at Kantar Worldpanel France (KWP France), a global expert in consumer behaviour. With a substantial offering for kids, H&M's appeal has shifted to families.

The French apparel and textile market (including shoes and home textile) is saturated and stagnating at around $48.5 billion (€41.2 billion), according to KWP France. At the end of March, H&M was the sixth most significant player in France with a 2.3 percent market share combining offline and online turnover (compared to 1.2 percent for Zara), having lost 0.1 percent over a year. The brand opened the first of its 210 French stores to date twenty years ago and launched its French e-commerce operations in 2014. Online, the Swedish group is the first click-and-mortar company (e-commerce accounting for 11 percent of its total sales) behind a list of pure players led by Amazon.

Soon in the new Parisian flagship, H&M plans to launch new services designed to better integrate physical stores with its digital platform. A space dedicated to click-and-collect will open near the fitting rooms later this fall. In-store, both sellers and buyers can use the brand's app to get style advice or tips on clothing care. Other ideas are being tested in select stores around the world, such as "Voice Interactive Mirrors" offering selfies, style advice and discounts via QR codes in the New York City flagship store in Times Square. It’s a signal that H&M's tier one flagships, like the new one in Paris, are increasingly morphing into platforms to geared to the click-and-mortar future.

It's Not Retail That's Dying. It's Our Imagination