“It wasn’t a strategic plan. It was the only option in terms of ticking the box on price, culture, accessibility and realness,” Stavros Karelis, founder and chief buyer of Machine-A said of his Soho location. “There’s a heritage and history here, something very real and pure. It wasn’t affected by the big chains. And yet it’s very democratic. Not everyone would walk down Bond Street, but everyone would come to Soho.”

Plan or not, the arrival of Supreme, Machine-A and Palace lay the groundwork for what is now a flourishing fashion-streetwear mecca that has attracted a flood of fashion brands targeting millennials who aspire to Raf Simons as well as skate brands, from Eytys to Champion. Italian store GCDS, or Gods Can’t Destroy Streetwear, recently secured a site next door to Supreme on Peter Street, while JW Anderson is set to open on the corner of Wardour Street in a former Carphone Warehouse in the spring.

There’s a heritage and history here, something very real and pure. It wasn’t affected by the big chains.

“Soho is one of the most vibrant parts of London with an incredible mix of locals and tourists,” said JW Anderson chief Jenny Galimberti. “When we were deciding where we wanted to open our first flagship, we knew it needed to be somewhere that has an energy, edge and diversity that aligns perfectly with the JW Anderson brand DNA.”

Soho’s gritty heritage of massage parlours and burlesque nightclubs offered both cultural authenticity and relatively lower rents when compared with other Central London shopping districts, which, combined with the relatively high footfall spilling over from once-cool Carnaby Street, anchored by Liberty, and the major shopping thoroughfare of Regent Street, made for a compelling mix for a certain kind of label.

“Right now, Soho is hot,” said James Ebel, chief executive of Harper Dennis Hobbs, a property agency that works with the likes of Microsoft and The Reformation to secure stores, citing the arrival of multi-brand streetwear player End Clothing’s large store on Broadwick Street last year. “Supreme and Palace really picked up, that’s why brands were looking, that’s why they want to be there,” he added. “If they’re looking for a cool, young fashion-conscious customer, they might look to Soho.”

“It’s an area that is already relatively well known to tourists, plus it’s bordered by high-footfall streets such as Regent Street and Oxford Street. For niche and emerging brands, as we’ve seen with streetwear brands in particular, the area offers a point of difference that can align with the aspirations of the brand; something that may be more difficult to achieve in mass-market locations,” added Marie Hickey, director of commercial research at property agency Savills. “Beyond this there are other added benefits related to costs; rents and business rates will be lower.”

End Clothing opened last year in a two-floor, glass-fronted, 8,500-square-foot corner space not far from once-legendary, now-closed fashion boutique A Pineal Eye, a harbinger of things to come during its reign in the late 1990s and early 2000s.

“For the last 15 years of John (Parker) and I visiting London, Soho was always the area that we felt our customer existed and was an area that had massive potential for an End store,” said co-founder Christiaan Ashworth. “This thinking was further backed up by Supreme and then Palace afterwards opening,” he continued. “We are really pleased with the first 12 months store performance.”

Fiorucci, Colmar, Eytys and Champion have all opened on Brewer Street, while Ganni and Samsøe Samsøe both recently launched on nearby Beak Street.

“Soho is such an iconic area in London,” said Ganni Chief Executive Andrea Baldo. It’s also the symbolic epicentre of London’s LGBTQIA+ community and home to a burgeoning restaurant scene. “You have this eclectic mix of food, art, stores and the odd shop that has been there forever. It’s an inclusive neighbourhood, where everyone is welcome, and the crowd is so diverse,” continued Baldo.

Soho has everything, it’s still dirty, you have the suits, the kids and the tourists.

Dutch streetwear boutique Patta, which opened in 2016 on Silver Place, a narrow pedestrianised cut-through street in Soho alongside Swedish brand Our Legacy and perfumer Byredo, was a sign for Ace & Tate that Soho was the right location.

“Patta, they were there. That’s an industry indicator for us,” said Doortje van der Lee, Ace & Tate’s head of retail expansion. “The neighbourhood has a lot of creative-minded agencies and offices so we wanted to connect with them, and the streetwear brands attract very specific customer who would connect to our brand so with that mix we thought it would be a success for us.” So far, the store has “exceeded expectations,” she added.

Alex Eagle runs her namesake boutique on neighbouring Lexington, selling tailored clothing, furniture and beauty products. Eagle, who is married to Mark Wadhwa, a Soho property mogul, moved in four years ago after outgrowing her store in more upmarket South Kensington. Byredo, Le Labo and Rag & Bone have all since moved into the street. “We have the kids queuing around the block for Palace and now The End. It’s good for the area. It’s the opposite of the high street. It’s known for drops and exclusives, a fashion destination in a great, new way.” 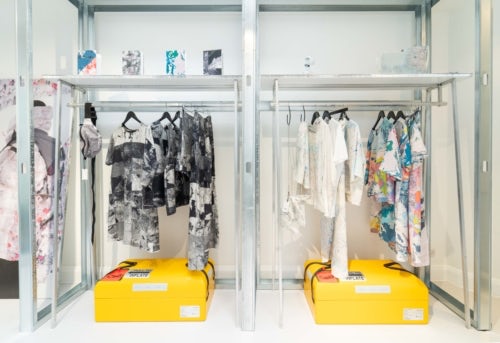 At menswear store Closet Case on the western end of Brewer Street, creative director Joey Hadley said he used to sell Italian luxury labels and brands like Galliano to a local media clientele. Today, 90 percent of his business is with 19-to-25-year-old Chinese and Middle Eastern shoppers, with prices ranging from £150 for a T-shirt to £3,000 for jackets. It certainly doesn’t hurt that Dover Street Market is nearby.

“We’ve just been mobbed by Chinese [customers] over Golden Week,” said Fiorucci-owner Stephen Schaffer, sitting in the Brewer Street store’s café beside a table of twenty-something Chinese women eating freakshakes. “Soho is slightly grubby and cool, but it has the respectability of nearby Regent Street. Fiorucci was more than a store; it was a community. I don’t know where else we would be.”

But how long will Soho’s unique attributes last?

The combined rent and business rates, the UK tax applied to all retailers on the building they occupy, have approximately doubled since Machine-A opened in 2013, from £60,000 a year to £120,000 a year. Karelis hopes property estates like Shaftesbury, the Crown Estate and Soho Estates don’t allow mass-market chains to open, for fear of destroying the authenticity and affordability that have made the area hot.

“Every location tends to heat up and cool, rents get to a point where it gets expensive and when that happens they look for somewhere new and fresh,” explained Harper Dennis Hobb’s Ebel, citing Shoreditch where the Spitalfields area has lost its edge over nearby Redchurch Street which still attracts “the cool kids.” Still, Soho has longevity as long as the landlords maintain the area’s niche. “I don’t see Soho at risk right now,” said Ebel. “I think the cool factor will continue for many years.”