NEW YORK, United States — How do you keep a good thing going?

That’s the million — and potentially billion — dollar question for Libby Wadle, the longtime J.Crew executive who was named president of the company’s fast-growing Madewell brand one year ago.

Madewell is certainly a good thing, a rare "mall" retailer that is seeing rapid sales growth at a time when many are closing stores. It’s a dramatic rise for a brand once simply known as the “little sister” to J.Crew, which acquired the logo and trademark in the early aughts and relaunched it in 2006 as a denim-focused range inspired by its heritage as a New England workwear company. Now, it's the go-to label for laissez-faire fashion: think dusty pink boiler suits, oversized jean jackets and fluttery floral dresses, all spritzed with the scent of French-girl cool.

In the first quarter of 2018, net sales at Madewell were nearly $116 million, up 39 percent from the same period last year. Sales at stores open at least one year — a more precise measure of a business’ health — were up 31 percent year-on-year.

These sorts of numbers are a retailer’s dream. For the J.Crew Group, which reported a 7 percent drop in sales at its flagship brand to $392 million last quarter, they're also a saving grace. Ten years ago, J.Crew had plenty of cultural cachet and rising sales, driven by the merchant-designer team of Mickey Drexler and Jenna Lyons. But it has faced numerous setbacks, from problems with pricing (too high) and discounting (too frequent). Misses on the product side, the rise of athleisure and fast fashion, and a general shift in customer preferences have also hurt.

J.Crew chief executive Jim Brett, who replaced Drexler in July 2017, has made numerous changes since his arrival, installing Starbucks executive Adam Brotman as chief experience officer in February and bringing on fashion industry veterans including Steven Alan and Geren Lockhart. "As our strategy continues to unfold, we will deliver an expanded and enhanced product range along with the launch of a data-driven personalisation engine and point-based loyalty program," Brett said in a statement regarding first-quarter earnings. With the new strategy in place, he plans to relaunch the J.Crew brand in September, "just in time for the most important fall and holiday seasons."

But the company’s fortunes are increasingly tied to Madewell, which accounted for about 20 percent of the overall business in the first quarter, and there is no reason to think that share won't increase, even if J.Crew does complete a successful turnaround. This quarter, the group's overall comparable store sales were up for the first time since 2014. While the decline in sales at J.Crew is not as steep as it was a year ago, Madewell's acceleration is more pronounced.

In early May, credit ratings service Moody’s boosted the company’s outlook to “positive” from “stable,” citing improved adjusted EBITDA — earnings before interest, taxes, depreciation and amortisation — which was nearly $37 million in the first quarter, a 28 percent increase from last year. Madewell was a major reason for the upgrade, said Moody’s analyst Raya Sokolyanska. 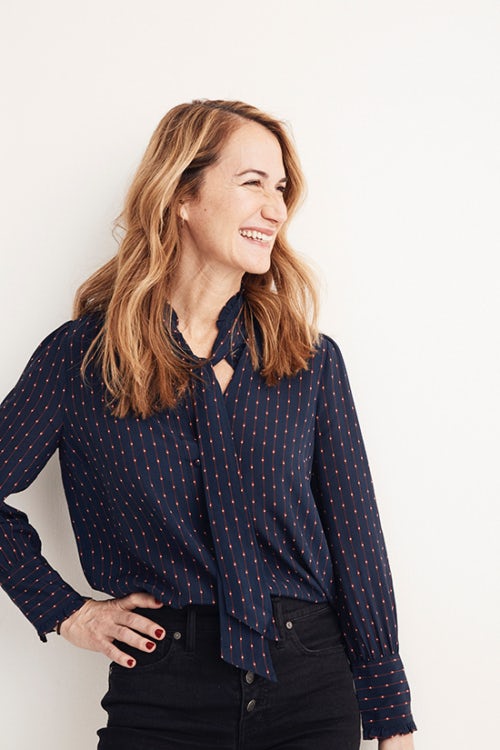 Which means that the pressure is on for Wadle. The executive joined the J.Crew Group in 2004 from Gap, Inc., where she also worked for Drexler, and was on the team that launched Madewell in 2006. From 2013 to 2017, she was president of J.Crew, overseeing the business just as it was entering its well-documented decline. At Madewell, which is nowhere near the size J.Crew was at its peak, she has more runway. But how will she keep up the momentum?

“What was cool about being a part of Madewell in the early days was that startup mentality,” Wadle told BoF. “I truly believe the reason that we’re successful is we think smaller and we’re all about listening to the customer and the Madewell community to fuel our growth. There’s a wonderful feedback loop.”

Why else is Madewell succeeding? For one, it has avoided many of its competitors' missteps. Where some retailers cut prices to attract customers — and are now stuck offering nearly year-round sales — Madewell discounts gingerly. Outside of major promotional periods, like the holidays, it tries to peg sales to its free loyalty programme, Madewell Insider. (For instance, those who sign up for the programme are often tipped off to promotions earlier than other newsletter subscribers.)

“We like to think about it less as discounting and more as a perk for being a great customer,” Wadle said.

Madewell also has the advantage of youth. With just 121 stores across the US, Wadle is focused on raising brand awareness in new markets through wholesale partnerships, including shop-in-shops at Nordstrom and at John Lewis in the United Kingdom. Online, Madewell ships to more than 200 countries. It also made news earlier this year when it opened shop-in-shops at six J.Crew locations. Some observers saw this as a Hail Mary for J.Crew, but Wadle positioned it as a way to test new neighborhoods and markets.

As for additional standalone stores, the executive said that the company is being less “prescriptive” about it than in the past, leaning on data culled from its increasingly important online business to help inform where it should open next.

“I go to every market to figure out if we’ll be a good fit in the community,” she said. “I don’t want to just pop up and add density. We will open stores, but it will be opportunistically and carefully.”

Even so, J.Crew won’t be able to sustain itself on Madewell alone, and needs to quickly halt the decline in its main brand, said Moody’s Sokolyanska. She said the company is on the right track, and could stabilise sales in the next 12-to-18 months through a combination of category expansion, personalisation and a relaunched loyalty programme, among other factors.

Looking ahead, there are plenty of growth levers Wadle can pull. For fall, a major focus will be size inclusivity, which means broadening the range of sizes both in denim — its core business — and beyond. Earlier this year, it began offering jeans up to size 35, although there was some online backlash from consumers insisting that the range was still too limiting.

Wadle said that the brand could have offered a wider size range and ordered more deeply as inventory ran out quickly. She plans to remedy that. “We went soft, and it was not enough. We should be doing more,” she said. “We’re in a great position come fall. Did it go perfectly in the first quarter? No. You always get mixed feedback, and that’s how we build our business. We have to get the fit right and listen.”

One no-brainer opportunity for growth is the men’s market, which could quickly catch Madewell up to J.Crew if executed properly.

“It’s not crazy to imagine that we would want to extend to men’s,” she said.

Op-Ed | What Gap and J. Crew Can Learn From the Grocery Aisle