And yet Stone Island, after more than three decades producing highly technical men’s outerwear, has become less known for its heavily-stonewashed, tarpaulin-like fabrics and intense R&D process; instead its signature compass patch insignia has become, since the 1990s, a central logo of football hooliganism across the UK and Europe.

Now, thanks to a number of surprise collaborations with Supreme since 2014, Stone Island has steered itself towards successful expansion into the United States and counts rap superstars Drake, A$AP Nast and Travis Scott among its biggest fans — the latter two even started an online spat over who could stake claim to the brand as part of their original style.

So how does Stone Island reconcile its position as an innovative brand founded by Massimo Osti, a former graphic designer and garment engineer, with its status as a cult phenomenon within Europe’s football scene?

According to Gavin Francis Thomas, a brand consultant who worked on Stone Island’s branding strategy in the US, “Stone Island’s never had to do a rebranding because everybody knew what it was. It’s never allowed itself to be pigeon-holed.”

Stone Island jackets, featuring the distinct black, green and yellow compass patch logo on the sleeve, first emerged on the backs of fashion-conscious Milanese youths of the 1980s and '90s — known as Paninaro for their habit of hanging around sandwich shops — and gradually became associated with fervent football supporters in Italy and beyond.

It’s a fascinating trajectory, how basically the same jacket can mean very different things in different parts of the world.

As the oral history goes, fans of successful British football clubs would follow their teams to European matches and return home wearing flashy brands unavailable in the UK, including Stone Island. The brand's adoption by Britpop icons like Oasis frontman Liam Gallagher helped elevate it to cult status for the '90s everyman.

Over the years, the obsessive embrace of the brand by football hooligans has seen Stone Island pick up negative press along the way. As recently as 2018, there were reports of bars and clubs banning anyone wearing the brand, with many citing violent behaviour as the reason behind the dress code.

But rather than falling into the trap of unsavoury cultural associations — as Burberry did in the early 2000s when its iconic check pattern became mired in ‘chav’ culture — Stone Island is thriving.

For the financial year of 2018, the family-owned company — helmed by Creative Director and President Carlo Rivetti and driven by a team of designers rather than one star figurehead — saw turnover increase 30 percent to €192 million ($213 million) and EBIDTA reach €57 million, up 51 percent from the previous year, according to company data shared with BoF.

Retail data and analytics firm Edited also confirmed that online discounts for the brand’s outerwear pieces remain under 30 percent, with a large proportion of designs selling out before discounts are added. “A big accomplishment,” said Edited Retail Analyst Tara Drury, “[given that] prices for outerwear in stock go up to $2,620.00 in the US and £1,895 [in the UK].”

Mr Porter, which has stocked Stone Island since 2013, tells a similar story of the brand’s success. According to Senior Buyer Simon Spiteri, Stone Island is now the second-best performing casual-wear brand on the site, and the October launch of its nine-piece exclusive collaboration comprising outerwear, knitwear and trousers has seen a number of pieces sell out.

Stone Island’s collaboration with Mr Porter allowed it to target more affluent shoppers, while celebrity backing and the partnership with Supreme has increased its exposure to Millennials and Gen-Z. “The brand has worked hard to reach a wider audience, where they’ve brought back old collections to cash in on the current consumer obsession with nostalgia,” Drury said.

While Stone Island has, of course, stayed true to its core values of research, experimentation and functionality, Drury attributes its recent success to “clever marketing.”

It’s never allowed itself to be pigeon-holed.

In opting for ad campaigns and seasonal releases in lieu of buzzy, Instagram-friendly catwalk shows or fashion week presentations, Stone Island has been able to target not only “North America but a whole new set of customers that had maybe forgotten about the brand or associated it with negative connotations,” she added.

That’s helped Stone Island establish itself as one of fashion’s buzziest brands globally. Currently it sits 11th on Lyst’s index of hottest brands, while its classic sleeve logo sweatshirt ranks sixth in terms of hottest products for Q3 2019 . It is also the only menswear-only label ever to feature in the Lyst Index and, according to a Lyst spokesperson, “the brand generates less social media buzz than some of [the index’s] other hottest brands, [but] it is a powerful force in menswear that seems to be perennially popular with shoppers.”

Meanwhile, those who have worked with or written about the brand wax lyrical about its authenticity. “I think the brand is consistent. It’s unrelenting in its identity,” said Thomas. “It’s never being prescriptive about how you should give life to [their product].”

Similarly, StyleZeitgeist Editor Eugene Rabkin became interested in Stone Island around 2006-2007 due to the brand’s “unique hybrid” of fashion, performance and streetwear — something he was increasingly drawn to as he became disillusioned with fashion's obsession with streetwear.

“The more I see logo hoodies from Dior and Louis Vuitton, the more I gravitate towards Stone Island because there’s a lot more design there.”

A forensic lens on the visuals of the brand’s marketing reveals that, arguably, the answer to Stone Island’s success lies somewhere in between savvy marketing and communication of a genuine brand history, a strategy that is largely helped by the fact that Stone Island remains a private family company — with minority stake owned by Temasek Holdings — working under a singular vision. 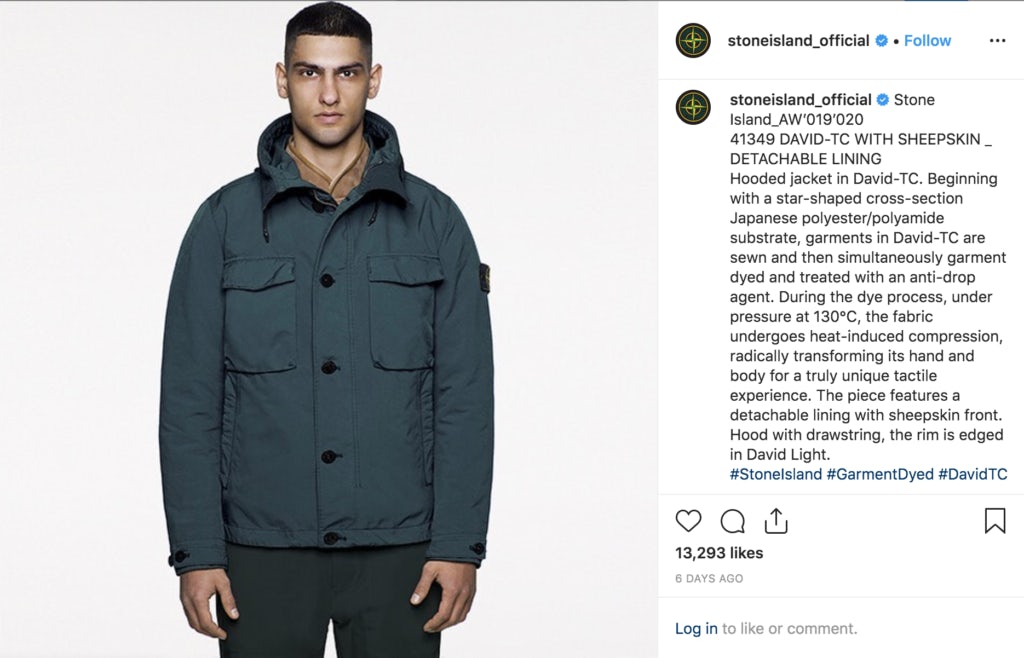 However, the work that has gone into Stone Island’s social media presence reveals the brand’s obstinate steer on its own narrative. Deceptively plain, Stone Island’s ad campaigns are shot against solid-colour backgrounds, or in the case of its videos, in a dark studio where, if not for the products themselves, strobe lighting would be the star.

Its ads feature a range of men — for the most part, racially diverse, but unified by square jawlines and youth. Beyond the nuances of body language — at most a downward tilt of the head or a hand in the pocket — there is little to read into from the visuals.

“They don’t need a graffitied brick wall,” said Rabkin “For them it’s product front-and-centre and that’s why you’ll see advertising hasn’t really changed.” While most brands rely on window-dressing or story-telling, for Stone Island “it’s about the jacket.”

“They’ve always spoken about the product,” said Thomas. “That’s what they are best at.” This emphasis on product design is echoed in the marketing copy. Its official Instagram account's 200-word captions contain in-depth technical product descriptions and almost always feature hashtags such as #GarmentDyed or #NylonMetal.

Also notable is that, despite the organic partnership that formed with avid Stone-Island-collector Drake — according to Rabkin, the rapper approached the brand, not the other way around — there are no reposts of his many Stone Island looks on the brand’s official Instagram page.

“It’s a fascinating trajectory,” said Rabkin, “how basically the same jacket can mean very different things in different parts of the world.” Across the Atlantic, a world apart from its football-and-class-related significance, “it becomes a hypebeast object of desire.”