The Canadian-American department store conglomerate is flattening its hierarchy across businesses, realising more than $350 million in annual savings when the changes are fully implemented.

On Thursday, those layoffs — which will eliminate 2,000 positions when completed — began. Senior-level staff at Saks Fifth Avenue — including senior vice president of digital retail Joe Milano — Gilt Groupe and Lord & Taylor were asked to leave in an effort to flatten the organisation’s hierarchy. Several members of the buying team were also let go, and some staff were given demotions. According on one source, there were “hundreds” of layoffs at Gilt alone.

Dismissed employees were asked to stay at the office on Thursday while HBC readied a public announcement, which was released at 4.05pm ET.

In the release, HBC laid out its "Transformation Plan," which is a result of a six-month operational review that identified inefficiencies with the aim of streamlining and improving back-of-store productivity in North America. The company says that it will realise more than $350 million in annual savings when the plan is fully implemented by the end of the 2018 fiscal year, with approximately $170 million saved in the 2017 fiscal year.  "These savings are required to help offset revenue, margin and cost pressures the company is facing as a result of the current environment," HBC said in a statement. Along with the $30 million in severance charges incurred during layoffs in February, the company will incur another $95 million in charges related to the "Transformation Plan" over the next 12 months.

The plan calls for major changes in senior-level management, including the creation of two leadership teams, one focused on Hudson's Bay in Canada, and another to accelerate growth at Lord & Taylor. Alison Coville has been named president of Hudson's Bay reporting to Jerry Storch, chief executive officer of HBC. She has held leadership positions at the department store since 2005. Liz Rodbell, who previously managed both Hudson's Bay and Lord & Taylor, will focus completely on the latter, where she will remain president.

“Alison is a seasoned professional with more than 30 years of experience in Canadian retail, nearly two decades of which has been spent at HBC," Storch said in a statement. "She has proven herself to be a dedicated leader with great intuition and knowledge of the market and sector. I believe her track record, keen insight, and bold vision make her the ideal leader to drive our strategy forward and accelerate our growth plans for Hudson’s Bay."

Other initiatives include integrating digital functions across the company — from marketing to operations and technology — and doing away with redundancies in departments including IT, digital, store operations and visual merchandising, buying and planning, and marketing.

Ian Putnam, previously head of corporate development, will take on the additional role of chief operating officer for HBC's joint ventures — which include HBS Global Properties and the RioCan-HBC Joint Venture — and he will also lead the HBC Real Estate team. Erik Caldwell has been named senior vice president of supply chain and digital operations.

Kerry Mader, executive vice president of store planning and operations, is now also responsible for visual merchandising, while Andrew Blecher has been named chief communications officer, assuming additional responsibility for the HBC foundations in the US and Canada. 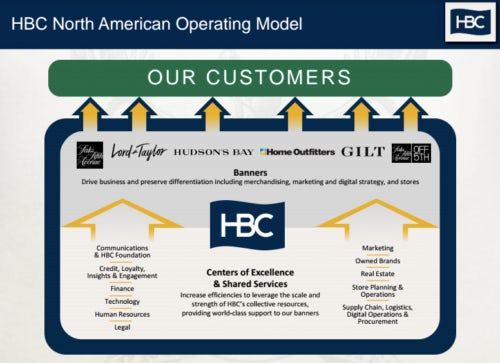 "We are reallocating resources to accelerate the opportunity we see online, as we run our brick and mortar operations more efficiently," HBC executive chairman Richard Baker said in a statement. "Our team is taking the right steps to optimise our North American business and create efficiencies by leveraging the scale of our company. At this critical moment of change in the retail industry, I believe in the future of our all-channel model and we are adapting to meet the evolving needs of our customers."

The restructuring is just the latest development in what has been a rollercoaster year for the company, which was reportedly in serious talks to acquire Neiman Marcus Group just a few weeks ago. In the past decade, HBC has been the driving force in many changes in the upscale department store landscape, forging a series of retail acquisitions — including Lord & Taylor in 2006, Hudson’s Bay in 2008 and Saks Fifth Avenue in 2013 — and financing the deals with mostly new equity and debt, but the real estate value seemed to be the biggest driver.

After the acquisition of Saks Fifth Avenue, HBC laid off 265 people in corporate positions in an effort to do away with redundancies.

Under HBC's ownership, Saks Fifth Avenue has implemented a multi-pronged plan to refresh the department store’s identity and bring back luxury consumers. The chain saw positive comparable sales in the most recent quarter ending January 28 for the first time since 2015. However, the parent company posted a net loss of $152 million CAD in the quarter, including a $116 million impairment charge related to its off-price business, which include Saks Off Fifth and Gilt, acquired in 2016 for $250 million. In fiscal 2016, HBC retail sales hit $14.5 billion CAD, but consolidated comparable sales decreased overall by 1.7 percent. Overall net loss was $221 million, versus $97 million in the prior fiscal year.

“This was a tough quarter for HBC,” Baker said  in a statement.

Sales at stores opened at least one year declined by 4.8 percent at Saks Fifth Avenue (on a constant-currency basis), 2.4 percent at the combined division of Lord & Taylor, Hudson’s Bay and Canadian home goods store Home Outfitters. and 6.8 percent in the off price division, which includes Gilt Groupe and Saks Off Fifth. The company said that Gilt — which it acquired in February 2016 for $250 million — accounted for an "outsize portion" of the decline in that division.

The company also said that it was open to taking "additional actions," around its valuable real estate assets — including selling more equity in its joint ventures — or a potential public listing. Saks' 5th avenue flagship alone is very valuable, appraised at about $3.7 billion when HBC acquired in it 2013.

“HBC owns real estate portfolio that allows us to have low-cost financing and resources that other retailers don’t have,” Baker told BoF in 2016. “It gives us tremendous access to capital. We can make commitments that our competitors can’t because we have financial strength and flexibility.”