NEW YORK, United States — The irony that off-price retailer Gilt was once valued at $1 billion, but acquired in February 2016 by Hudson’s Bay Company (HBC) for just $250 million, is not lost on HBC chief executive Gerald (Jerry) Storch. “Would we have paid a billion dollars? Probably not,” Storch says. “Keep in mind, this was a good deal for us. The business isn’t what it used to be, but we didn’t pay the peak price. We got it on sale.”

But much like the discounted designer items sold at Gilt, Storch believes that the price of the company doesn’t necessarily equal its total value. “In this case,” he says, “it was worth more than we paid for it.”

That’s why the Toronto-headquartered owner of Hudson’s Bay, Lord & Taylor, and Saks Fifth Avenue department stores is betting big on Gilt not only to boost its bottom line, but also to boost its technology capabilities across its properties. “I have no doubt it has accelerated our efforts,” Storch says. “The Gilt team is incredibly technology savvy.” Steve Jacobs, who joined Gilt in 2009 as its vice president of data analytics and was promoted to chief information officer in 2010, is now senior vice president of digital technology across HBC. He’s working to implement the data-driven marketing that has been successful at Gilt throughout HBC, which has adopted an “all channel” strategy in order to better serve today’s sophisticated consumer. For instance, Gilt generates more than 2,000 versions of its daily sale newsletter so that communication can be as personalised and tailored to each customer as possible.

Thus far, Gilt has also contributed plenty to HBC’s top line. In the first half of the 2016 fiscal year, HBC consolidated retail sales were CAD $6.6 billion (USD $5 billion at current exchange), up 59.5 percent from the same period last year, thanks in part to the Gilt acquisition. But sales at Saks Off 5th stores open at least one year were down 7.9 percent during the same period. (Saks Off 5th, the outlet offshoot of the Saks Fifth Avenue brand, has been in operation since 1990, with 107 stores globally.) HBC attributed the decline to a decrease in promotions — aka, further discounts on discounted goods — that resulted in higher margins but cut into sales. Saks Off 5th and Gilt both also moved their websites onto a common e-commerce platform, which the company says “caused some disruption,” negatively impacting sales.

However, the company wants to further amplify the benefits of unifying Gilt and Saks Off 5th operations. The two entities now share inventory, data and technology, making for a smoother customer experience and playing into HBC’s “all channel” growth strategy. (For instance, Gilt products can now be returned to Saks Off 5th stores.)

To lead the efforts at both Saks Off 5th and Gilt, Storch installed Jonathan Greller as president and Kristen Sosa as chief merchant. Prior to the acquisition, Greller — a 20-year veteran of the company — spent two years running Saks Off 5th and before that, worked his way up the ranks at Lord & Taylor. Sosa began her career in planning at Saks Fifth Avenue in 1995, spending over a decade in merchandising and operations at Saks Off 5th.

The acquisition of Gilt might have been seen as a good deal to HBC, but for the startup it was akin to a successful Hail Mary pass. While Gilt was not the first flash-sales site to emerge in the aughts — that credit can be given to France’s Vente-Privee — it was the first to successfully introduce the model in the United States. Initially, the premise for Gilt, which was founded in 2007, was to sell excess inventory from high-end designers over a limited period of time, typically 72 hours. These online “sample” sales launched every day at noon, just in time to break for lunch.

At first, there was plenty of high-quality inventory for Gilt to acquire. (Early adopters included Zac Posen and Marchesa.) It was a time when brands were desperate to turn over excess product. As the US experienced one of its most devastating recessions in history, Gilt’s revenue rose from $170 million in 2009 to $425 million in 2010, according to estimates published in 2011 by Internet Retailer. It raised around $280 million and was once valued at a billion dollars. By selling to HBC for $250 million, it did not make a sizeable return for its investors.

From the beginning, it was clear that Gilt would not be able to rely solely on high-quality excess inventory in order to sustain growth. Most outlet or discount retailers, from Gap to the TJX Companies — which owns T.J. Maxx, Ross and Marshalls in the US and T.K. Maxx in the UK — buy or manufacture new product in order to keep up with demand. “The fundamental challenge that anyone in the off-price sector has is how to acquire inventory — enough supply to drive sales and at a cheap enough price to drive volume,” Sucharita Mulpuru, currently the chief retail strategist at commerce-event company Shoptalk, told BoF in 2014. “The big off-price retailers [such at T.J. Maxx] can make enormous buys, discreetly dispose of it and everyone is happy. But the supply of liquidated inventory isn't big enough even for them. That's why those big guys need to manufacture merchandise, or they make early buys and pre-commit to merchandise to increase their access to supply.”

At the same time, the potential for growth in off-price retail is undeniable. In the second quarter of its 2017 fiscal year, net sales at TJX were $7.9 billion, up 7 percent from the same period a year earlier and up 4 percent in stores open at least one year. The Framingham, Massachusetts-based company’s current market capitalisation is $49 billion, according to Bloomberg. “Value is the buzzword of our generation,” Storch says. “Definitely one of the major growth factors for retailing in general is value. It’s not just off-price fashion, but you see the same in the grocery segment. There is going to continue to be rapid growth in the space, and we have a unique niche in high-end off-price.”

HBC has high hopes for the Gilt-Saks Off 5th combination, surely observing the success of Nordstrom’s 2011 acquisition of Gilt competitor HauteLook. In 2015, HauteLook and Nordstrom Rack — which operates more than 200 locations — made up 29 percent, or $4 billion, of the company’s $14.1 billion in net sales. In 2014, Nordstrom launched Nordstromrack.com and virtually combined it with HauteLook.com so that consumers would be able to shop the same product on each site. The e-commerce segment of Nordstrom’s off-price business generated more than half a billion dollars in 2015, a 50 percent jump from the year previous. “It took 15 years for Nordstrom.com to reach $1 billion in sales,” Nordstrom stated in its annual report. “We believe Nordstromrack.com and HauteLook combined have the potential to reach that milestone in half the time.”

HBC does not break down sales by division, but there are 41 full price Saks Fifth Avenue stores compared to 107 Saks Off 5th outposts, indicating where things are headed. Of course, the margins on products sold at Saks Off 5th and Gilt are presumably lower than what is sold at Saks Fifth Avenue. But the logic in keeping the Gilt brand alive and not just rolling it into Off 5th surely has plenty to do with perceived value. “All the brands in the HBC portfolio, the consumer seems to respond the best to Gilt and to Saks,” Storch says. In March 2016, the company launched its first Gilt shop-in-shop in Saks Off 5th’s Midtown Manhattan location, complete with in-store events.

And while Saks is following in the footsteps of Nordstrom Rack and HauteLook by consolidating its inventory, the way that inventory is marketed will continue to be different. “Luxury brands come to Gilt to drive traffic,” Sosa says. That means doing some of what Gilt has always done — securing an exclusive on the distribution of a brand’s excess inventory — but also designer product specifically for Gilt, and sometimes creating in-season merchandise. (This is similar in concept to what Net-a-Porter offshoot The Outnet has done with brands including Oscar de la Renta, Matthew Williamson and Charlotte Olympia.)

For emerging brands, Sosa says Gilt serves as a marketing platform. What’s more, while Saks Off 5th deals primarily in clothing and accessories, Gilt’s inventory is more varied, with high performance in children’s, men’s, home and experiences. “I can’t tell you how many people I talk to who decorate their entire home with product from Gilt,” Sosa says. “It’s really a differentiator for us.” The company also plans on continuing on with its Gilt City product, which started off as a high-end Groupon and still offers localised discounts on things like spa treatments and restaurants. “We’re focused on making Gilt a lifestyle brand,” Greller says. 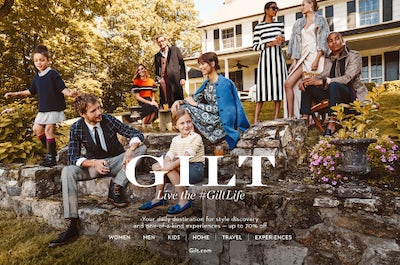 On September 19, the company also introduced its “#GiltLife” autumn campaign, which depicts family and friends spending time both in the city and the country, clad in in a way that visually feels more Michael Kors than Marshalls. To kick off the multi-channel campaign, HBC rented a townhouse in New York City, where it will host Gilt member activations around food, bridal, home and fashion for more than a week. Tickets are available through Gilt City. “This campaign is getting to the core of that,” Sosa says. “Reiterating the idea of the Gilt life.”

To be sure, part of the push is to market both Gilt and Saks Off 5th as less “deal” driven, and more “value” driven. (Hence the reduction in promotions.) “With the Saks name over the door...they come in looking for product they would find at Saks or at a luxury store. Our teams really have to think that way more in terms of value versus price,” Sosa says. “There isn’t a price for something if it’s not the right product. It’s really about the perception. It’s really about how you feel when you buy something at the store versus just what you’re paying.”

Indeed, what remains the challenge for all off-price retailers, but in particular those who deal in more expensive products, is differentiating the product enough from not only their competitors, but their own full-price counterparts. The biggest threat to retailers, particularly in the United States, is the promotional nature of the current shopping climate. Specialty retailers like Gap have cannibalised themselves not only by offering year-round discounts, but relying more and more on off-price outlets to drive sales. “This is about short-term growth, not a long-term strategy,” says Andrea Weiss, founding partner of retail consulting firm O Alliance. “Many consumers are choosing the outlet store over the full-price store. That can have a detrimental impact on the core business. It’s dangerous times when you start using off-price as the growth strategy.”

But perhaps traditional retail is too far gone to worry about usurping one channel in order to accelerate another. Greller continues to drive home the importance of “selling true fashion at real value” to the consumer. “This is not a simple business. I understand the macro-economics of what’s going on in the industry, but it’s not as simple as someone just opening up a store and putting a name over the door and being successful,” he says. “We’ve been at this since 1990, we have a fantastic buying team who is working with the market daily on curating the buys and telling a story, which is why we’ve been successful.”