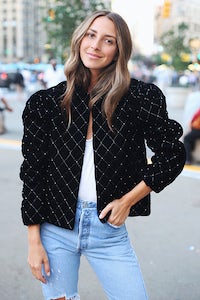 NEW YORK, United States — Call it the Arielle Charnas effect: when the 31-year-old lifestyle blogger promotes a brand on her Instagram feed, a rush of sales invariably follows.

A single Instagram Stories post linking to Bandier’s e-commerce site drove over $207,000 in sales in just four hours for the activewear retailer in March. A fall 2017 capsule collection at Nordstrom was “the most successful collaboration that we’ve had,” Tricia Smith, the department store’s executive vice president and general merchandise manager of women’s apparel, said at an August event.

Now, Nordstrom is betting Charnas is good for more than a fleeting sales bump. In the retailer’s biggest partnership with an influencer to date, dozens of products branded with Something Navy, the name of Charnas’ blog, will be sold in stores and on Nordstrom.com through a licensing deal. Early returns look promising: the first collection, including v-neck slouchy pullover sweaters for $79 and faux-fur teddy coats for $149, generated between $4 million to $5 million in sales on the day it launched, according to a person familiar with the revenue figures.

Charnas’s rise represents a sea change in fashion, where influencers with no background in the industry are the new power brokers, with front-row seats at fashion week and collections in upscale department stores. As retailers like Nordstrom struggle, they’re leaning more on the sales spike that comes from releasing the latest line by a buzzy celebrity or brand. Increasingly, that means tapping into Instagram, where 72 percent of users make purchasing decisions based on what they see in their feed, according to data from X-Cart.

In addition to Charnas, Nordstrom continues to invest heavily in influencer-fronted lines: in mid-September, Nordstrom rolled out Chriselle Lim’s Chriselle Lim Collection online and in 40 stores, and on October 22, Blair Eadie of Atlantic-Pacific will follow suit with a line she co-created with the retailer’s Halogen private label brand, Halogen x Atlantic-Pacific. Macy’s and J.C. Penney are staking claim in the category too. In September, Natalie Suarez of Natalie Off Duty launched a 17-style collection with Macy’s, and Brooklyn and Bailey McKnight, twin sisters who maintain a namesake YouTube channel with over 5.5 million subscribers, inked a deal with J.C. Penney in July: they co-designed backpacks for the department store’s largest private label brand, Arizona.

Charnas is a standout earner for her retail partners. She has 1.1 million Instagram followers — a sizeable amount, but well below other influencers who have launched fashion lines, including Chiara Ferragni (15.1 million followers) and Aimee Song (4.9 million followers). Rather, it’s the intensity of her following that drives sales; fans find Charnas accessible, with her high-low style, conversational approach and candidness about her personal life. According to influencer marketing platform Fohr Card, Charnas has a “true reach” — how many people actually see her posts — that is 230 percent higher than average influencers with followings around her size.

“These girls feel like we’re friends,” she said in an interview at Something Navy headquarters in New York’s Flatiron District. “I’ll go out and they’ll run up to me … when I talk to them they’re like, ‘Sorry is this weird but I feel like I know you.’”

It’s rare that you find someone like Arielle that really has the capability to drive sales the way that she does.

Charnas, a Long Island native, started chronicling her life on her blog in 2009, and in 2013, when she had just 35,000 followers on Instagram, got involved in a short-lived family e-commerce venture. But it wasn’t until the last few years, as her Instagram Stories began to attract hundreds of thousands of views – due in large part to a trifecta of fashion content, her wedding and birth of her first daughter – that fashion and beauty brands started to take notice. An endorsement deal with TRESemmé that included a TV spot that began airing in January 2016 was her first six-figure deal, and events started to attract crowds of over 5,000 fans. From there she quickly racked up endorsement deals and took stakes in some of the companies she worked with, including Bandier, Jaja Tequila, clean makeup brand Kosas, and Bou for You, a soup company.

“It’s rare that you find someone like Arielle that really has the capability to drive sales the way that she does,” said Neil Boyarsky, Bandier’s chief executive. “There are influencers who have many millions of followers who don’t drive sales.”

Last year, Nordstrom approached Charnas about co-creating a capsule collection for its private label brand, Treasure & Bond. The department store was battling declining sales as more customers opted to shop online rather than at the mall, and saw collaborations with brands on the rise – from TopShop and Bonobos to influencer Julia Engel’s Gal Meets Glam Collection – as a way to lure shoppers back to stores.

After Charnas’ September 2017 capsule sold over $1 million in just a few hours on Nordstrom.com, talk turned to a more-permanent arrangement. Toward the end of 2017, Charnas inked a licensing agreement to release a Something Navy collection via the retailer.

Charnas has described her wares as “elevated basic,” meaning she’s injected some current trends – a black velvet jacket with silver crosshatch stitching has structured voluminous sleeves and there’s a plaid coat that mirrors designer outerwear, for example – into pieces that still fall into the “basics” category. It’s also among the most affordable product Nordstrom offers: earrings starting at $29 and tops can be had for as little as $59.

The partnership is a “mutually beneficial relationship,” bringing new customers to Nordstrom while offering Charnas nationwide exposure and access to a retail distribution network that would be hard for a startup label to replicate overnight, said Oliver Chen, managing director at Cowen.

Chen said the sales generated by Something Navy won’t move the needle on their own at Nordstrom, which reported $14.8 billion in revenue last year. But it’s a symbolic victory for the department store to show it can still generate buzz. “You have to appreciate that apparel is a slow growth category of somewhere around three percent, and to get that extraordinary growth is impressive,” Chen said.

Despite Nordstrom identifying Charnas as it’s most successful influencer collaborator, the retailer has a stable of fashion lines co-designed by content creators — a mix of capsules with existing brands and private label collections as well as standalone entities similar to Charnas’ or Lim’s. For Charnas, the challenge will be sustaining and then parlaying the buzz she has now into a fully realized business.

It’s one thing to have the support of a multi-billion dollar retailer like Nordstrom, which handles everything from logistics and manufacturing to production and marketing of final product. It’s quite another to have to build a company from scratch, which is not only capital intensive but requires significant retail infrastructure that’s not easy to put in place as a start-up — especially if Charnas’ is intent on building a multi-category lifestyle brand  à la Tory Burch.

This is all part of Charnas’ master plan of parlaying her influence into a lifestyle brand. In November, Nordstrom will release its second Something Navy collection, a selection of 64 styles that contain more expensive cashmere and leather pieces. December’s holiday collection will see the introduction of kid’s apparel with matching “mommy and me” pyjamas, a precursor to the expanded kid’s range launching alongside swimwear in February. In June, totes, travel bags and suitcases will join the mix, followed by sunglasses and lounge and sleepwear.

Beyond her Nordstrom partnership, Charnas will continue to invest in brands and develop other digitally products. She said she’s exploring TV options and the building of a digital media platform to develop and leverage the followings of up-and-coming influencers.

Her licensing deal with Nordstrom expires at the end of next year, according to sources. After that, she has several options: extend the agreement, link up with another retailer or brand, or strike out on her own, said Gil Eyal, chief executive and co-founder of influencer marketing platform Hypr Brands.

“Nordstrom can be sure that other brands are looking at this and they’re reaching out,” he said. “[If she were to] resign with Nordstrom they’ll have to be ready to pay up. It’s an option; but they’ll have a lot of competition.”

Editor's note: This article was revised on 11 October, 2018. A previous version of this article misstated that Charnas is 30 years old. This is incorrect. She is 31.