With commuting and tourism sharply down, savvy retailers are using creative partnerships with local attractions to target consumers in their neighbourhoods.

With commuting and tourism sharply down, savvy retailers are using creative partnerships with local attractions to target consumers in their neighbourhoods.

NEW YORK, United States — The tourists and office workers who used to drive sales at Cosabella’s SoHo flagship stopped coming when the pandemic hit in March, and still haven’t returned. But the lingerie brand has discovered a new customer: the lunch, brunch and dinner crowds at the Italian restaurant next door.

What began as a neighbourly gesture to allow Osteria Morini to set up tables on the sidewalk in front of the store turned out to be an unexpected boon. Sales at the location have recovered to pre-pandemic levels, said Guido Campello, Cosabella’s co-chief executive. Turns out, after two or three Aperol spritzes, people like to shop for underwear.

“When people are drinking and are merry, they wander inside,” he said, adding that he is exploring partnerships with other restaurants around town.

In cities across the world, consumers who once popped into stores on their lunch breaks or between museum visits while on vacation are now staying home. They may still go out to shop. But they are far less likely to venture outside their own neighbourhoods when they do.

For brands whose retail footprint consists largely of outposts in malls and shopping districts such as SoHo and London’s Oxford Street, the transition hasn’t been easy. Indoor malls in the US saw 37 percent fewer visitors in the first week of September compared to a year ago, according to foot traffic analytics firm Placer.ai. Meanwhile, stores in Soho, such as Nike, Aritzia and Bloomingdale’s are still seeing traffic down more than 40 percent compared to 2019 levels in the last week of September, Placer.ai found.

E-commerce is only part of the answer. People are spending more online, but few brands say it’s enough to offset the plunge in brick-and-mortar sales. And it’s harder to develop an emotional connection with consumers via purely digital transactions.

With the pandemic likely to drag on for another six months – at a minimum – brands are searching for ways to reach customers where they are. Cosabella’s restaurant strategy is one; others are opening pop-up shops far from the usual high streets, or forming partnerships with neighbourhood venues and community organisations.

People have a lot of pent-up energy for doing things right now.

As customers remain bound to their neighbourhoods, even global chains must adopt local qualities in order to reach their shoppers. People are still willing to step outside their homes to look for interesting activities — they’re just not travelling as much.

“People have a lot of pent-up energy for doing things right now,” said Nikki Baird, VP for retail innovation at Aptos, a retail services firm. “It’s all about getting in front of them.”

Last month, the shoe retailer DSW opened a shop-in-shop inside six Hy-Vee grocery stores in Minneapolis. The idea of grabbing a pair of pumps along with produce might have seemed far-fetched a year ago. But supermarkets are one of the few retailers that have seen an uptick in traffic, and surveys show consumers want to consolidate their shopping trips to fewer stores to minimise their health risk. "Continuous, high traffic to the grocery category is exponentially greater than traditional retail right now," DSW parent company Designer Brands' Chief Growth Officer Bill Jordan told BoF in an email statement.

“This is out-of-the-box-thinking that takes into account the overlap in demographic,” said Julio Lopez, director of client strategy, retail practice lead, at Movable Ink, a marketing firm that helps brands personalise their messaging to customers based on their location.

Many brands team up already – spas and salons often sell a selection of third-party beauty products, and clothing stores often carry jewellery brands that pair well with their style. This sort of “bundling” works best when both sides get something out of it: The guest brand might gain exposure while helping the host retailer draw curious customers to stores.

Brands can partner with new wholesale accounts in the home space, said Heidi Sax, product marketing manager at CB4, a data analytics firm for brick-and-mortar stores. Lifestyle is shaping up to be a major category in the coronavirus era and beyond, she said, because so many shoppers are making home improvement purchases.

Bulletin, a wholesale platform that provides inventory for boutiques, has signed up direct-to-consumer brands looking to expand their reach during the pandemic, said Ali Kriegsman, the company’s co-founder.

“These traditionally direct brands have never done this before, and it’s because now they’ve been forced to think hyperlocal,” she said. The jewellery line Notte, for example, didn’t have a major wholesale presence prior to the pandemic. After signing up with Bulletin, it’s now stocked at a number of independent boutiques such as Good Neighbor in Detroit and Feels, a store in Ridgewood, Queens. 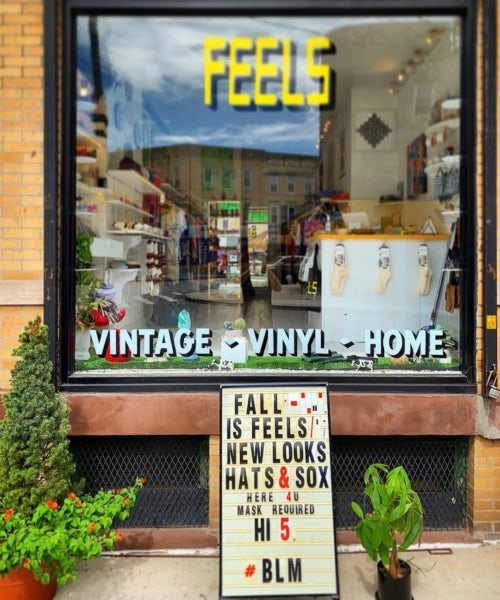 The usual caveats about wholesale apply.

“With a partnership, you’re not paying rent but you’re also not getting the full margins on the product,” said Charlotte Kula-Przezwanski, partner and director of EMEA at Columbus Consulting. “What might be even harder is making sure your partners respect your brand identity.”

Not all partnerships require a physical location. Visiting a store is an experience that e-commerce can never replicate, sure, but brands can also offer a live component to online sales.

“Imagine a lingerie brand that creates a date night package: lingerie alongside champagne and some sort of dinner recipe component,” said Katrin Zimmerman, managing director of the Americas at TLGG Consulting. “You don’t even need a collaboration, you can do it on your own.”

Fashion brands can take a cue from the beauty industry, which saw a surge in at-home beauty treatments this spring. German beauty conglomerate Henkel, for instance, advertised its at-home hair colouring kits on Instagram. Even restaurants got into the DIY package game as a response to the pandemic, from make-it-yourself doughnut kits to candy care packages that come with small toys too.

While this may be hard to replicate for brands that specialise in knitwear or shoes, Katrin said companies can consider adding coupons or perks to high-value purchases, such as through a voucher for a spa or hotel.

Before winter comes, fashion retailers still have an opportunity to take advantage of outdoor activities to attract customers. In New York, farmer’s markets have been exceedingly popular this spring and summer, with some farm vendors selling out hours before an event ends.

Selfridges hosted its weekly “Market on the Mews” throughout the summer, setting up tents in the parking lot of its Marylebone store featuring local food and drink vendors, as well as home products and flowers.

“Open-air markets and pop-ups are much easier to get in front of consumers than some sort of indoor space,” said Baird, of Aptos. While summer may be over, there are plenty of autumn-themed outdoor fairs brands could look into — or even host themselves, she added.

About once a month since the pandemic began, Holly Jade O’Leary receives a WhatsApp message from the store manager of the REDValentino in Sloane Square, near where she lives. Typically, it’s a simple “hello” followed by news of a recent collection and an update on what’s on sale. Sometimes the message includes a personalised recommendation, such as a pink satin headband that matches a pair of pink satin shoes she had purchased last year.

“It’s actually quite emotional as a customer,” said O’Leary, director at luxury consultancy Alinea London. “It’s a positive way to generate sales… [without being] intrusive.”

Personalised customer service has become an increasingly popular way of engaging shoppers as well as making the most out of store associates when foot traffic is low. Brands like Kate Spade and Anthropologie’s bridal line Bhldn allow shoppers to make video appointments with store associates and stylists, while a number of third-party apps allow brands to host live shopping events, often from their closed stores, to reach their customers on their preferred social media platform.

Treat each door like it's its own locally-owned business.

The business of e-commerce live-streaming, which marries the experiential component of brick-and-mortar retail with the digital consumer, is projected to reach about $25 billion in the US by 2023, according to Coresight Research.

Conducting live shopping, though, should be as personalised of an experience as possible. Even big chains with hundreds of stores need to treat each location like it’s the neighbourhood shop, or the connection between store associate and consumer won’t feel authentic.

“Brands have to give their managers autonomy,” said Sax. “Treat each door like it's its own locally-owned business … Empower store teams to spot and act on local trends, and move things around when something is or isn’t working.”

Even digital marketing campaigns can include a localised element, according to Lopez. His firm, Movable Ink, allows retailers to differentiate email campaigns to recipients in different zip codes, changing the message accordingly to reflect local trends.

“For instance, it could be weather-based,” he said. “Like, ‘The temperature is dropping five degrees this week, here are some sweaters.’”

Zara, Gap and H&M are among the global chains that have said they will close hundreds of underperforming stores this year. Other retailers are hoping customers return to malls and other formerly high-traffic locations.

While they wait, brands can experiment with new neighbourhoods through pop-ups or short-term leases, especially at a time when landlords are more willing to negotiate.

Warby Parker uses dozens of variables to forecast what sales would look like at any given address in the US, said co-founder Dave Gilboa. But the strongest predictive variable is the number of its current customers within a five to 15-mile radius.

The eyewear brand tries to sign short-term leases – 18 months, rather than five or 10 years – to test out new locations, he said. 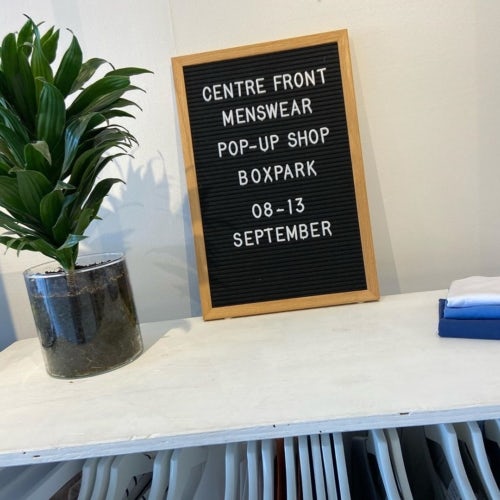 More brands are also using pop-ups to reach the local consumer, according to Ross Bailey, whose company, Appear Here, connects vendors to short-term retail spaces. Bailey said he has seen demand for neighbourhood locations in both London and New York surge in the wake of the pandemic. In London, neighbourhoods like Chelsea, Hackney and Notting Hill have seen search volume double year over year, the company said, while city centre district Covent Gardens has flatlined in the same period.

Centre Front Menswear, for instance, has held four pop-ups in different localities in London, such as Hackney and East Dulwich, in lieu of opening one permanent store.

“The upshot is that even though business is slow, you have to reinvest in your physical presence,” said Sax. “And you need to get it right 100 percent of the time. Or else you could lose them forever at the first chance you had to win them over in the first place.”

The Pandemic Changed the Way People Live. How Can Fashion Adapt?

Tapping into the Future of Physical Retail