Milan's 10 Corso Como, the original concept store, joins an array of upscale boutiques in Manhattan, many hailing from out of town as well. They all hope to grab a share of strong growth in luxury spending by catering to jet-setting consumers who crave a 'curated' shopping experience.

Milan's 10 Corso Como, the original concept store, joins an array of upscale boutiques in Manhattan, many hailing from out of town as well. They all hope to grab a share of strong growth in luxury spending by catering to jet-setting consumers who crave a 'curated' shopping experience.

In the two decades since the debut of 10 Corso Como in Italy, Sozzani has turned her retail concept — widely known as the original concept store — into a Milan establishment with a thriving franchise in Asia: pop-ups, restaurants, collaborations in Seoul, Tokyo, Shanghai and Beijing. New York only got on her radar in 2014, Sozzani said, when the Howard Hughes Corporation, a developer, invited her to consider opening a space in its 3.5-acre redevelopment of the South Street Seaport neighborhood at the tip of Lower Manhattan. The site is of one of New York’s earliest piers, when New York was still New Amsterdam, and housed artists such as Ellsworth Kelly and Agnes Martin in the 1950s and 60s.

“I was in the middle of opening a cafe in Beijing. But when we came and saw the place, I loved the history of it — and that you can feel the sea,” Sozanni recalled, sitting on a round sofa in the middle of the yet-to-open 28,000-square-foot store. While construction still clamoured on in the background, the space was already shaping up: its sleek silver fixtures and sea of overhead lighting orbs evoke the sense that one is inside a vast and glamorous spaceship.

The store, which opens Thursday, Sept. 6, features a cafe, restaurant, garden, bookshop and photo gallery. It’s slightly bigger than the original in Milan, launched in 1991. Today, however, 10 Corso Como joins an array of upscale concept boutiques in Manhattan, many hailing from out of town as well. In March, the Dallas-based multi-brand retailer Forty Five Ten will open in Hudson Yards, another major New York redevelopment by Related Companies. And The Webster, the Miami Beach boutique that later opened in Houston and Cosa Mesa, Calif., unveiled an outpost in New York’s SoHo late last year. 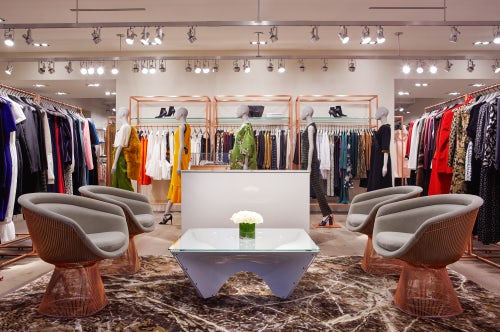 These retailers are joining an already robust shopping landscape in New York, including century-old department stores Bergdorf Goodman and Saks Fifth Avenue uptown and trendy counterparts Totokaelo and Dover Street Market downtown. They all hope to grab a share of what they anticipate will be strong growth in luxury spending in the coming years, as well as heightened tourism in the city, by catering to jet-setting consumers who crave a “curated" shopping experience no matter where he or she goes. Whereas the department stores bank on having a wide selection of global brands like Gucci and Louis Vuitton, the new crop of boutiques are cultivating their own voices through a carefully edited selection of young, emerging designers.

These upscale boutiques are also much more Amazon-proof — or rather, Net-a-Porter-proof — because they’re individually curated, with product assortment that changes constantly with exclusive items. This one-of-a-kind appeal is precisely why developers such as Howard Hughes and Related sought them as anchor tenants. Both 10 Corso Como and Forty Five Ten have signed 15-plus-year leases, and The Webster owns the building which it inhabits.

“I’m quite bullish on these specialty retailers. I think that each of them offer their own curated points of view on collections and provide an intimate way of shopping,” said Kelsey Groome, a managing director at retail consultancy Traub. “I think there is room for them in each of their neighbourhoods.”

When Forty Five Ten opened in Dallas in 2000, it was competing with local stalwart Neiman Marcus and single-brand stores operated by the likes of Balenciaga and Chanel. At the time, there was no “great directional boutique,” said founder Kristen Cole. “But we got on board with new and exciting designers — Lemaire, Molly Goddard, and Wang, when he first came onto the scene, and other designers of that ilk.”

In a similar vein, Sozzani emphasised the newness that she aims to exhibit in her South Street Seaport store, which will carry brands like Samuel Ross’ A-Cold-Wall, Eckhaus Latta, Sies Marjan and Heron Preston.

The Webster, meanwhile, made its mark through exclusive capsule collections in partnership with the designers it carries.

“We constantly do collaborations with all our brands — we have more than 200,” said founder Laure Hériard Dubreuil. “It could be just one product… like sometimes I see a pair of shoes in just one color so I’ll ask the designer, ‘why not make in another color?’ and that’s how capsule could come about.”

In 2013, for instance, after seeing Anthony Vaccarello’s latest ready-to-wear collection feature a number of black eyelet dresses, Dubreuil was able to convince the Belgian designer to make three versions in red in an exclusive collection.

It’s this relationship-building that sets The Webster apart, said Dubreuil, who draws from her experience as a merchandiser at Balenciaga and Yves Saint Laurent. “It’s very personal and very intimate, and it comes from the heart. I’m running my business the same way I’m running my family and my home,” she said.

Expanding to New York was more or less a natural transition for Dubreuil and Cole, given their customers’ flight patterns. Many of The Webster’s initial clients in Miami Beach, for instance, were New Yorkers who own second or third homes in Miami. Dubreuil began to plan a New York location just four years after she opened the Miami flagship, but building out her six-story property in SoHo took another four years. By the time The Webster opened last November, it already had a crop of loyal fans who first encountered the store at Art Basel, the annual art showcase in Miami.

“We realized early that a lot of our clients are shopping at all our different locations, especially between Houston, Miami and New York,” Dubreuil said.

Likewise for Forty Five Ten’s Cole, who will soon be launching a new location in Aspen after opening her first store outside of Texas in Napa last year. Cole said her customers tend to be involved in the arts. That’s why she wanted the New York location to be near Chelsea, with its concentration of galleries and museums.

But like Sozzani, Cole wasn’t actively looking in New York when Related Companies approached her two years ago. And just like South Street Seaport, Hudson Yards will be an expansive mixed-use community with hundreds of residential units. Local foot traffic, then, will be a crucial force in driving sales, as will tourists to the brand-new destinations.

“[Related] is estimating 20 million customers coming in every year,” Cole added. “But since it’s new neighborhood, I think we’ll have a lot of local shoppers as well.”

Tourism has long been a major economic booster for New York. Last year, tourists accounted for more than 25 percent of all Visa transactions in the city’s stores, according to the think tank Center for an Urban Future. It was a record year for tourism, drawing 62.8 million visitors and marking a 90 percent uptick since 1998.

Sozanni and Cole both estimate that tourists will comprise a significant portion of their sales in New York, while Dubreuil already sees a 50-50 mix. Miami is still The Webster’s biggest outpost in terms of sales volume, she said, but she anticipates New York to be the top store soon.

If the three retailers aren’t worried about New York’s retail establishment, they’re even less worried about the onslaught of Amazon. Old-fashioned store traffic, in fact, makes up the bulk of all three retailers’ sales. The Webster has its own e-commerce platform, but 10 Corso Como has only dabbled in online sales on a local basis and Forty Five Ten sells through online marketplace Farfetch.

“Today, you have two ways of shopping: very fast on the internet or very slow for the experience. What 10 Corso Como stands for is experience. You don’t come here to buy a jacket in three minutes,” Sozzani said, though she has plans of using the New York store as a fulfillment centre to build out its e-commerce platform.

Brick-and-mortar is indeed on the upswing again as retailers across the board benefit from high consumer confidence and a strong labour market. While mass-consumer retailers have also found recent success with experiential retail, the idea that shopping should be a pampering or exciting excursion is not new to upscale vendors. Luxury brands have long offered champagne to its customers, and decades before The Websters hosted private capsule collection viewings, Bergdorf organized fashion shows inside the store.

For the likes of 10 Corso Como, the experience of retail is part of their DNA. Drawing on her decades in the media and art industry, Sozzani aimed to create a “living magazine” in a store format when she founded the company.

“Fashion is just one part of the puzzle,” she said. “It’s not the heart of it. We have the gallery, the culture, and the food — it’s more about living an experience.”