Macy’s Inc: The Slow Death of an American Icon

Macy’s needs more of the ‘magic’ the company touts in its tagline if the department store chain is to survive.

Macy’s Inc: The Slow Death of an American Icon

Macy’s needs more of the ‘magic’ the company touts in its tagline if the department store chain is to survive.

For many Americans, there is no department store quite as iconic as Macy’s, mythologised in the 1947 Christmas film “Miracle on 34th Street.” For generations, thousands of holiday shoppers have descended each season on New York's Herald Square, home to the famous Macy’s flagship, to watch the Thanksgiving Day Parade, see the store’s window displays, pay a visit to Santa and do their Christmas shopping.

It’s no surprise, then, that Macy’s Inc. waited until the new year to deliver what some are calling the “death knell” of the American department store. On Wednesday, the bloated chain — which saw comparable store sales fall 2.1 percent during November and December after seven straight quarters of decline — announced it would close 68 of its 730 stores in 2017 and eliminate more than 10,000 jobs, many of them management positions. Macy's has also begun to sell off its real estate, one of its most valuable assets, including stores in San Francisco and Portland, Oregon. Last year, real estate sales generated $95 million in cash, earning the company $56 million in recognised gains.

But while these measures may provide Macy’s with a short-term lifeline, there is no Band-Aid large enough to heal the gaping wounds in the company’s current business model. The chain continues to suffer from overstoring, with vendors voicing complaints that the store’s wholesale model does not allow them to control their own brand experience and that the Macy’s brand itself has suffered from endless discounting, shop floors in disarray and a merchandising strategy out of step with today’s consumers.

The retailer says the restructuring will allow it to focus on areas of growth, including its off-price concept Macy’s Backstage, beauty specialty retail chain Bluemercury — which the company acquired in 2015 for $210 million — and China, where it plans to launch e-commerce in 2017.

But these moves are too little, too late. Without an inspiring retail concept in its core business with the power to woo customers the way “Miracle on 34th Street” once did, the future for Macy's looks grim.

The company long ago lost trend-driven consumers to more nimble fast fashion players. What’s more, the convenience of e-commerce has unbundled retail, removing the friction that provided much of the raison d’être for one-stop-shops like Macy’s, where a wide range of products can be found under one roof. Indeed, Amazon — a massive marketplace as well as a traditional e-tailer — is set to displace Macy’s as the top seller of apparel in the US in 2017, according to research firm Cowen & Company.

For Macy’s to survive, it will need to think more like a landlord. It will need to present customers with more compelling products, more inviting in-store and online experiences and a business model that allows its stockists — which now have a direct line to the consumer through social media and direct sales — more control over how their products are presented. That means more shop-in-shops, like its new in-house Apple store, which opened in the Herald Square flagship for the 2016 holiday season.

In sum, Macy's needs more of the “magic” the company touts in its tagline if it is to survive.

Amazon and Forever 21 eye American Apparel. The two companies are reported to be among a number of firms considering buying American Apparel out of bankruptcy. Any offer would have to exceed Gildan Activewear’s $66 million bid, which American Apparel agreed to when it filed for bankruptcy in November. The bankruptcy auction, expected next week, will determine the future of American Apparel’s Southern California manufacturing plants, which employ about 3,500 workers.

Macy’s cuts more than 10,000 jobs. The US department store announced it will close 68 stores and cut more than 10,000 jobs this year, following lacklustre performance during a holiday season where comparable sales fell 2.1 percent in November and December. Many department stores, which have traditionally relied on a strong holiday shopping season to drive sales, struggled with disappointing winter sales at the end of 2016.

Kate Spade plans formal auction process. Kate Spade is reported to be exploring a sale. The New York-based retailer, which has a market value of $2.2 billion, has six potential bidders in mind. The company has struggled over the past few years, with shares declining sharply since 2014, prompting hedge fund Caerus Investors to push the company in November to find a buyer to help improve profit margins.

Agent Provocateur’s owner considers selling. Private equity firm 3i is reported to have approached high net-worth individuals and sovereign wealth funds for a potential sale. The investor, which acquired the luxury lingerie brand in 2007, announced a restructuring in November, saying the retailer had been hit by a luxury spending slowdown and an inconsistent store expansion programme. It is expected to close 30 percent of its retail network and reduce staff at its London headquarters by a third. 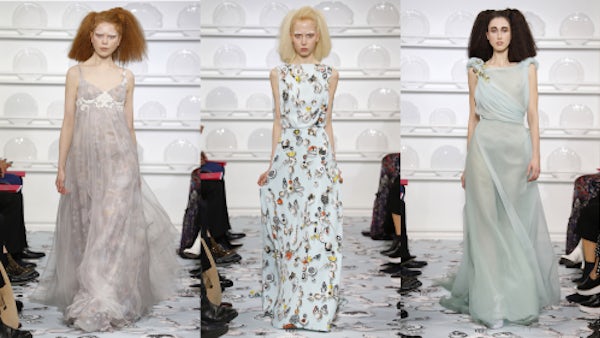 Schiaparelli awarded couture house status. The Paris-based maison has been granted haute couture status by the French Couture Federation, along with French designer Julien Fournié. Founded by Elsa Schiaparelli in 1927, Schiaparelli closed down in 1954 and was relaunched in 2013 by Diego Della Valle, the CEO of Tod’s Group. Only 15 fashion houses, including Dior and Chanel, hold elite haute couture credentials, which come with strict regulations, while 15 brands hold guest memberships.

Chloé declines to comment on rumours of a new creative director. Chloé has declined to comment on a Reuters report that it is preparing to name Louis Vuitton’s Natacha Ramsay-Levi as creative director. The report also said current creative director Clare Waight-Keller had decided not to renew her contract, which ends this March. The appointment would be the first leadership change of 2017, following a series of reshuffles at brands including Yves Saint Laurent, Balenciaga and Dior last year. Ramsay-Levi is currently second-in-command to Louis Vuitton designer Nicolas Ghesquière.

US Trade Office blasts Alibaba for counterfeiting, again. The United States Office of the Trade Representative has once again added Alibaba to its “Notorious Markets” blacklist, four years after it was removed from the list. The decision is a setback for the Chinese e-commerce giant, which has been working to undo its reputation; tightening policies against copyright infringement and making it easier to report fakes. This month, it announced it was suing two vendors for selling fake Swarovski watches on its Taobao platform.