AMMAN, Jordan — The ancient city of Petra, 70 years of regional turmoil and the spiralling Syrian refugee crisis. All spring to mind at the mere mention of Jordan, the Middle Eastern nation that shares a border with Iraq and Syria. Few of us, however, would think of its vibrant garment manufacturing industry.

But look at the labels stitched into clothing made by Gap, Victoria’s Secret, Hanes, Eddie Bauer, Lands’ End or Macy’s and there it is: “Made in Jordan.” Garment exports make up roughly 20 percent of the country's gross domestic product.

In the arid outskirts of Jordan’s cities sit a growing number of industrial parks that house garment factories quietly churning out clothing for some of the world’s most recognisable brands.

There are currently 75 factories producing everything from towels to t-shirts, fleeces to frilly knickers. They account for 95 percent of the industrial workforce, and 95 percent of apparel exports.

Despite its reputation as the safest place in the Middle East, instability in Jordan is at an all-time high. More than one million Syrian refugees are jostling for shelter and a few Jordanian dinars a day (one dinar is equivalent to $1.41). Jordan is the only Arab country still active in the coalition against Isis, and the threat of destabilisation from Syria and Iraq have authorities working all-out to protect the country’s northern and eastern borders. 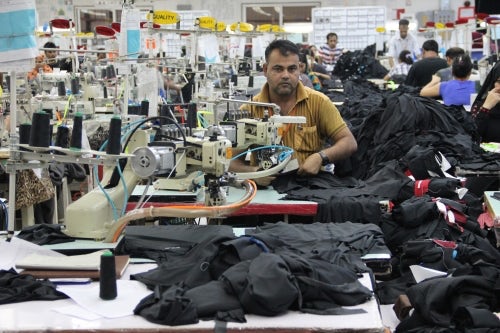 Jordan’s political opposition, the Muslim Brotherhood, is breaking apart, allowing the dissenters to slip under the radar. The country’s ruler, King Abdullah, has increasingly relied on financial and practical support from his allies, such as the United States, to support not only his people, but also asylum seekers from Syria, Iraq, Sudan and Yemen. Many diplomats in Amman privately admit they think of a terrorist attack in terms of ‘when,’ not ‘if.’

Yet, somehow, the industry is growing at a time when all common-sense indicators suggest it shouldn’t be.

“When you step into Jordan, you never feel the regional tumult,” says Radhakrishnan Putharikkal, president of the Classic Fashion factory on the sprawling, 118 hectare Al-Hassan Industrial Estate just outside the northern city of Irbid.

Classic is now the leading garment manufacturer in the Kingdom. Its exports accounted for nearly 13 percent of Jordan's $1 billion garment exports to the United States last year, according to Jordan's Trade Ministry. Established in 2003, it has grown from a small-scale operation (300 people, 130 machines and $2 million turnover per year) to 15,000 employees, 7,500 machines spinning out close to 200,000 garments each day, and an annual turnover of more than $250 million.

“Jordan’s stability and location made us choose it over Morocco or Tunisia, and our calculations were 100 percent right,” says Putharikkal.

In contrast to its neighbours Israel and Saudi Arabia, Jordan is a poor country, devastatingly dry with few resources: potash, phosphates, concrete and tourism top the list. Oil is imported, along with nearly half the country’s food and the bulk of manufactured goods. Despite the economics, how Jordan became a manufacturing powerhouse is more about politics than purchasing power.

When the 1994 peace accord was hammered out between Jordan and Israel, a key economic element was introduced: the Qualifying Industrial Zone (QIZ). Under this legislation, goods produced in collaboration with Israel could enjoy freer access to the US market. The QIZs were packaged as a “peace dividend,” says Jordan scholar Sean Yom, a political science professor at Temple University in Philadelphia.

“They were presented this way to convince many Jordanians that the 1994 peace accord with Israel would benefit them. It was supposed to catalyse the export sector, spread more jobs and attract foreign investment.” 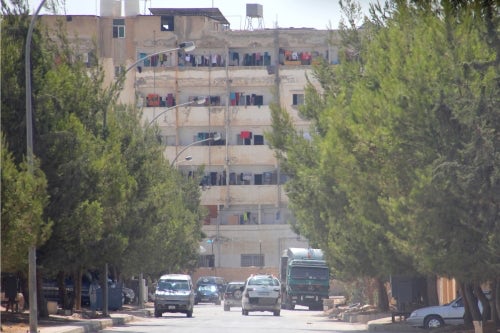 This happened, but only up to a point: the group that benefited most from foreign investment was merchants and businessmen, people who already had financial capital and could leverage their connections to secure new contracts, and as Yom puts it, “rake in more profit.”

“Most of the jobs initially went to foreign labour anyway, before a backlash forced managers to hire locally,” says Yom.

Some experts say the export potential of the QIZ project became moot in 2000, when the US inked its free trade agreement with Jordan, cutting out the need for an Israel connection. But others say the QIZs served another purpose: fast-tracking the free trade deal with the US.

"Without these factories in the QIZ zones we could never have started the process to attract these Hong Kong and China manufacturers and the US trade,” says Halim Salfiti, the former chief executive of Al Tajamouat Industrial City.

With most of the old QIZ factories growing and new industrial areas springing up under the US-Jordan free trade agreement, business boomed. In 2006 and 2007, the multi-billion dollar business of exporting manufactured goods (mainly clothing) was Jordan’s largest export.

One area where the QIZ project failed, and where the garment manufacturing industry under the US free trade agreement is still floundering, is around employing locals, particularly women. Official statistics show that for years, the labour market participation of girls and women aged 15 and above has stagnated at around 12.6 percent, compared to 60.3 percent of men in the same age bracket.

Classic has struggled with this in its urban factories, which employ around 2,000 Jordanian workers. Cultural factors are significant: Jordan is a socially conservative country and in rural areas and smaller cities, like Ajloun, where Classic has a satellite factory mainly employing Jordanians, women tend to withdraw from work upon marrying. 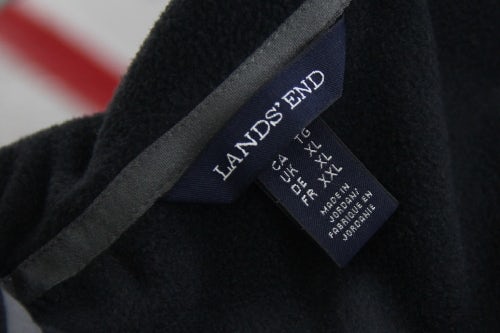 A fleece top made at the Classic Fashion factory | Photo: Ibraheem K. Shaheen

Anecdotally, among Jordanians, factory work tends to be seen as shameful, and even in areas with high levels of unemployment, meeting labour demands with skilled or trainable local staff is challenging.

Classic has set up a crèche as a way of retaining its 90 percent female workforce at its Ajloun factory. But employee turnover is between 15 percent and 20 percent, mainly due to marriages.

Local employees are also more expensive: Jordanian workers receive an additional 80 dinar per month for their living expenses, whereas international workers receive in-kind payment in the form of housing, food and living costs.

Foreign workers typically come to Jordan on three-year contracts and work six eight-hour days, with 125 percent minimum wage pay for overtime and 150 percent for holidays. Many are members of Jordan's General Trade Union of Workers in Textile Garment and Clothing Industries, which in 2013 saw a landmark collective bargaining agreement on wages, employment conditions and seniority issues take effect.

All of this is a marked improvement over conditions during the sector’s most prolific stretch, around 2006 to 2007. Factory owners and subcontractors were accused of a range of workers’ rights abuses at the factories making clothing for Victoria’s Secret, as well as Levi's, Gap and Calvin Klein. A New York Times investigation accused Jordan of running sweatshops where workers were abused and even imprisoned. 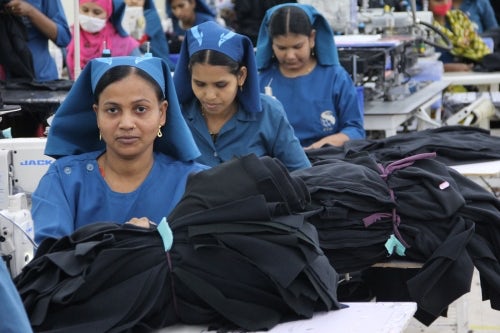 Despite an unemployment rate of at least 12 percent, Jordan also imports labour. There are around 55,000 garment workers in Jordan, and about 75 percent of them are from Bangladesh, India, Sri Lanka, Myanmar and Madagascar.

Putharikkal explains: “There’s a competition for who can do things for the best price, and brands know which factories are good at what.”

Classic focuses on knits. Factory bosses recruit in workers’ countries of origin for people skilled in this type of fabric, in order to take advantage of the free trade agreement between Jordan and the US. A monthly minimum wage of just 110 Jordanian Dinars (about $155) for garment sector employees makes it an attractive set-up.

According to Better Work Jordan, a partnership between the International Labour Organisation (ILO) and the International Finance Corporation (IFC), conditions and compliance have improved. All factories that export to the US must be assessed annually — something Better Work Jordan carries out. In its 2014 report, the organisation found that 33 of the 55 factories that had been assessed before showed improvements across all compliance areas. 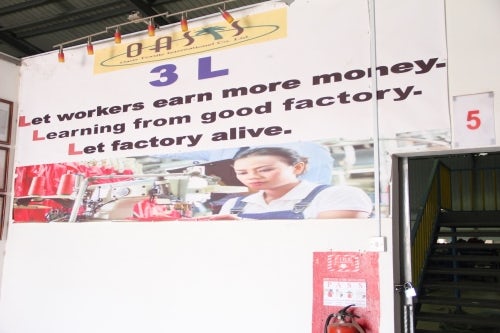 “The violations continue,” she told BoF at a meeting in her Amman office. She faces a steady stream of migrant workers in need of help, from making complaints about treatment on the factory floor to requests for legal help with hefty fees incurred for breaking contracts early. Kalash says grievances are fewer and less egregious than in past years, but she and her team are still run off their feet.

As Jordan’s tourism industry collapses in the face of regional chaos, revenue from garment manufacturing is becoming more valuable. Growing the sector and employing more locals and more women is the next challenge. And here, progress begets progress: nine months ago Jordan’s Ministry of Labour inked a deal to establish a new, partly-subsidised factory in the country’s deprived Husseiniya district. The project guarantees 500 jobs for local women.

With a busy, high-functioning port in Aqaba on the Red Sea and access to Israel’s Haifa port through the Allenby Bridge crossing, Jordan is well placed to be a global manufacturing hub. Shipping from Jordan to the US is quicker and cheaper than shipping from Southeast Asia, and as Classic’s Putharikkal points out, Jordanian factories are developing a reputation for good work delivered on time.

As regional tensions ratchet up, it's undeniable that some sort of change is coming. But in Jordan's factories, for now, at least, it's business as usual.