In her first interview, Johanna Uurasjarvi shares her approach for revitalising a brand that’s still shaking the legacy of former designer Jenna Lyons. 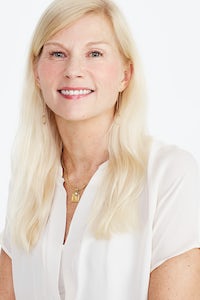 In her first interview, Johanna Uurasjarvi shares her approach for revitalising a brand that’s still shaking the legacy of former designer Jenna Lyons.

NEW YORK, United States — Johanna Uurasjarvi joined J.Crew in late June, which means that the first collection under her complete purview won’t be on the floor until the fall of 2019. But as chief design officer of the J.Crew brand — which officially re-launched today with “#Meetmycrew,” a diversity-driven advertising campaign — she’s already getting in the weeds.

An early obsession? Revamping the brand’s wear-to-work lineup for women. While the casualisation of culture means that fewer people are wearing suits or dresses every day to the office, formal attire is still required in certain industries. (And 80 percent of managers feel clothing choices affect a person's chances of being promoted, according to a 2018 study released by human resources consulting firm Robert Half.) Uurasjarvi wants to address that need with more than basic black trousers.

“I felt really sad for customers that it was so black,” the Finnish-bred Uurasjarvi said in her first interview since her arrival. Her white-blonde hair and summer tan are framed by organic, oblong gold hoops, a white T-shirt, a printed Churchill-blue skirt and pristine white ankle boots.

“I know in some [work]places that’s what you have to wear, but there are a lot of places that you could wear an ivory or a light blush colour, or a little print. Or how about a long-sleeved dress instead of a jacket, or a beautiful wide-legged fashion pant? It was like, ‘I can give this woman something.’”

No one needs a basic white T-shirt that doesn't have a little something.

With that, Uurasjarvi has developed a wear-to-work capsule that will launch next summer ahead of her formal debut. In the meantime, she’s implementing the design rubric already established by chief executive Jim Brett, who was her colleague at both Anthropologie — where she led the in-house design team for 15 years — and West Elm, where Brett recruited her to be creative director when he was running the modern American furniture brand.

Because of their shared history, Brett and Uurasjarvi have similar philosophies about design and execution. Just as she did at Anthropologie, which became a billion-dollar brand under her tenure, Uurasjarvi prefers designing into aesthetic buckets, creating vignettes each season that fit like a puzzle into a greater brand story.

At J.Crew, she said, that story is very much in line with what Brett has expressed. It will be preppy, yes, but it will also move beyond that, with an emphasis on “pretty” clothes. “I think we can capture more customers, but we also can, I think, excite the same customer in different ways,” she said.

She thinks there’s potential in casual wear, too, but that doesn’t necessarily mean athleisure. (The company has discontinued its activewear collaboration with New Balance.) “Living in Park Slope, where I am in Brooklyn, everyone is relaxed,” she said. “Weekend casual is wear-to-work for someone else.”

Home is another category with which both Uurasjarvi and Brett have experience, and Brett acknowledged in a recent interview with BoF that the brand would be entering that territory, first by buying products from other brands to sell in the stores. (Manufacturing J.Crew-branded furniture may come later.)

For now, however, she is set on getting the apparel and accessories back on track. While cost cutting, lower prices and deep discounts returned the brand to modest growth in its most recent fiscal quarter after 15 straight quarters of decline, making product that consumers want to buy at full price will be the real test to see whether Brett’s vision for J.Crew can work.

The trouble you run into today with designers is that they design for themselves.

There will be inevitable comparisons to Jenna Lyons, J.Crew’s former chief design officer, whose fashion-led tastes became a cultural phenomenon complete with equal parts adoration and backlash. Lyons also became famous in her own right.

Uurasjarvi’s approach may prove less polarising. While her own tastes are rooted in Scandinavian minimalism, her personal style won’t necessarily be reflected in the wares she and her team designs. “The trouble you run into today with designers is that they design for themselves,” Brett said. “Johanna is a true creative.”

Uurasjarvi said that the consumer will see J.Crew evolve not away from fashion entirely, as some reports have suggested, but instead into something more inclusive. “I always say to my design team that everything they design have to has a purpose,” she said. “No one needs a basic white T-shirt that doesn't have a little something.” Until September 2019, then.