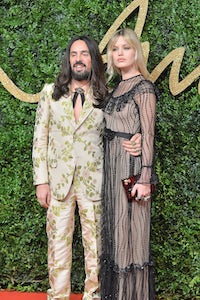 “Do the times make the man, or does the man make the times?” asked Blanks. “It’s a question that’s often asked about revolutionaries. And a revolution is what Alessandro Michele promised at Gucci.”

Michele responded in kind, acknowledging the unorthodoxy of his appointment as creative director of Gucci by François-Henri Pinault, chief executive officer of Kering and Marco Bizzarri, chief executive officer of Gucci. “They had the courage and the foolish act to appoint an unknown guy like me as the creative director of one of the most influential fashion houses in the world,” Michele told the audience. “Over ten thousand thanks,” he added. “One for each Gucci employee all over the world.”

It was a significant moment for the designer. Ten months ago, Michele was an unknown quantity; a worker bee in the Gucci design team. But last night’s accolade rounds off a year of consistent international critical acclaim for the designer, since he was appointed creative director in January and designed his first runway collection in five days.

For a business like Gucci, which posted revenues of around €3.5bn ($3.72 billion) last year, it’s not just about critical success. BoF can reveal that Michele’s collections for Gucci are also having considerable commercial impact. So much so, that Marco Bizzarri has decided not to markdown Michele’s first two collections — Autumn/Winter 2015 women’s and men’s, including ready-to-wear, shoes and bags.

“First of all, I wanted to give the collection of Alessandro the longest-possible time at full price in the shop. It’s so new for our company; so new for him,” Bizzarri says, of this break with retail tradition. As the US gears up for Black Friday, fashion houses will markdown their Autumn/Winter collections this week. “I think it’s too early to put them on markdown now. Alessandro’s fashion show collection started arriving in August, so two months and a half later, I didn’t want to do this kind of action now,” he says. Michele’s Autumn/Winter 2015 collection began arriving in stores in June, and early deliveries of Cruise followed in August, three months ahead of the usual seasonal schedule.

According to Bizzarri, discounting the Autumn/Winter 2015 men’s and women’s collections would have little impact on sales: “The full-price sell-through is super high, so even if I put them on sale now, the impact on sales would be tiny,” he says.

More than that, he believes markdowns could damage the image of the brand. “The impact on the image would be too big,” he says, emphasising the new interest in Gucci that Michele has stirred up. “We’re seeing a lot of new clients, a lot of new customers — different, younger, more fashion-forward — buying the collection, but not losing the previous ones.”

So, what will happen to the leftover stock? “Let’s see. We have outlets. We don’t know yet,” says Bizzarri. “What is important to say is that we didn’t buy dramatically high when we bought the collection of Alessandro in the beginning. The full price [sell-through] was very, very high, so we don’t have a lot left, frankly.” The discount strategy for Michele’s first cruise collection, which is beginning to arrive in stores now, will be assessed in June.

Currently, Gucci is in the throes of a global creative turnaround. At present, only 25 percent of the leather goods on the shop floor are from Michele’s collections, with the majority from previous creative director Frida Giannini’s reign. By February 2016, Michele’s share of what Bizzarri terms “the bulk of the business” will rise to 50 to 60 percent.

So far, Michele’s new store concept has been introduced to Gucci's flagship in Via Montenapoleone and newly-opened stores in Seoul, Korea and Times Square, Hong Kong. By the end of 2015, 30 stores will be renovated to implement the new store concept, and Gucci’s London’s Bond Street location will also be made over in the first semester of 2016, to tie in with the label’s Cruise show in the city. To roll out the new retail concept across all of the brand’s stores will take the company from three to four years.

Thus far, however, Michele’s success can only be measured in months. How will Gucci maintain the momentum around the designer’s new vision for the Italian label?

“Now, the challenge that we have, the two of us, myself and Alessandro, is to keep on pushing ourselves to innovate as Alessandro innovated at the very beginning, and take risks,” says Bizzarri. “Always try to challenge our team and our people, and we always need to be at the front, at the edge of innovation. Take risks. Don’t try to play safe.”

“On the other side, I think we are much safer now, because we have a pipeline of new product coming out in the following seasons that are so strong,” he adds. For Pre-Fall, we can expect to see Michele “filling the gaps” in the collection today. “From a business standpoint, I feel super confident… Maybe the risk is lower than what I saw in other companies, but it is a risk. It’s part of the game; it’s part of fashion.”

Indeed, Gucci has chosen a tough time for an image overhaul. As China — a core growth engine — slows, and markets like Russia and the Middle East lose momentum, for luxury fashion businesses, organic growth will be increasingly hard to come by. “The growth is going to come from getting market share from other brands,” says Bizzarri, pointing to how millennial customers are spending in related industries like health and wellness — and luxury companies should look to lure them back. “We need to really understand what kind of service, what kind of activity, attractiveness we can create now in our industry. Now, execution will make a huge difference.”

And what of Michele’s win? “Internally, we realised the change and the shift has been huge,” says Bizzarri. “But then, the outside certification that he brought something very new to the fashion industry in such a short period of time, making people talk again about Gucci being a fashion authority, is remarkable.”