LONDON, United Kingdom — It’s been almost a year since Prada debuted its “Prada365” initiative, an ambitious multi-channel attempt to remodel the company’s public identity, across everything from print media to Instagram to retail. One of the qualities that has made Miuccia Prada such a force in fashion is her quickfire curiosity, leaping from one idea to the next. At the time of the launch, she acknowledged that those charged with its success worried she might be over it in six months and onto The Next Thing. In fact, the opposite happened. “I’m more committed to the idea than ever,” Miuccia says during a phone conversation over the weekend, just before she wings away to Miami. “For a while, I was a bit too lazy, concentrating on Fondazione Prada. Now I can get excited about my job again.”

Right now, a major contributor to the elevated excitation is the store Prada is opening this week during Art Basel Miami Beach. In January, Miuccia said one of Prada365’s commitments was to address the sense of sameness in the brand’s shops around the world, to celebrate differences instead by focusing on local elements. “The mountain is not the seaside,” she declared back then. The first expression of the new approach was a beachy pop-up in St Barts, but Miami is the real blueprint for the future.

I was fed up with being too intellectual. Now, I’m much more present. I’m back to life.

The design of the store is a hybrid of the city’s Art Deco and modernist 60s architecture accessorised with furniture by masters of mid-century Brazilian design such as Joaquim Tenreiro, Jorge Zalszupin and Sérgio Rodrigues. Miuccia had started buying it all anyway for the new home she’s doing in Milan. Now she’s generously consigned her new collection to Miami’s interiors. “I didn’t want to put art on the wall,” she says. “Furniture is an exciting new direction.” She adds, with a rueful laugh, “My only worry is I don’t have them for myself, but we’re working with Tenreiro’s family to do editioned copies.”

Anyone who’s familiar with her work knows that Miuccia is a connoisseur of a particular kind of sensuality. The clothes of Yves Saint Laurent, the movies of Luis Buñuel, their collaboration on “Belle de Jour”: “It’s so perverse, but it’s not part of today anymore,” she sighs. The sensuality of Brazilian design is something else, solid, organic, primitive/sophisticated. Prada’s classic green walls have been reconfigured in three-dimensional Art Deco foliage, shaped in cement. The floors are the classic black and white checkerboard of the first Prada store in Milan’s Galleria Vittorio Emanuele II. Against that cool backdrop, the rich, dark tones of Brazilian woods like jacaranda and cabreuva look positively erotic. It’s also intriguing to think that a lot of the pieces were probably created under the auspices of Brazil’s military dictatorship, when design would have offered a vital freedom of expression. 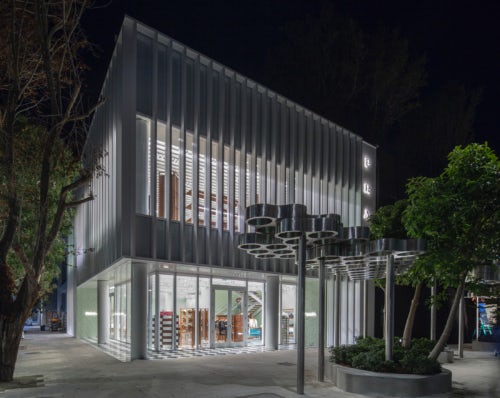 “Free” is a word that Miuccia uses often. Maybe Prada365 has honed a shift in sensibility. “I’m still trying to investigate what 365 really means,” she counters. She sees the major challenge as bringing theory and practice together. “I think it’s the right direction, but every single day you have to be out there.” She appreciates there's freedom in that kind of spontaneity. It certainly infused the spring collection with a new urgency. “I was fed up with being too intellectual, too much with the art world,” Miuccia admits. “Now, somehow, I’m much more present. I’m back to life.”

Living in the moment is a famous/infamous Millennial trait. The M word makes Miuccia snort. “It’s a commercial category. Those poor guys, I’m offended for them.” Still, she understands the lust for experience. “People want to be excited,” she muses. “Probably they always did. Probably they’re all bored to death.” Prada anticipated all of this years ago, in 2008, when the Fondazione opened the Double Club in London. It was artist Carsten (he of the famous chute that slides from Miuccia’s office to the courtyard downstairs) Höller’s “human experiment,” a collision of the art, culture, music, food and lifestyle of two very different cultures, Western and Congolese, with no attempt at all made to fuse them. For the eight months of the pop-up, it was the only game in town.

People want to be excited. Probably they’re all bored to death.

Höller is back for Art Basel Miami Beach with the same concept, only this time the culture clash is Western versus Caribbean/South American. The space (once a 1920s film studio complex) has been split into a monochromatic indoor club space, stark black and white, and an outdoor garden, in tropical hypercolours. Höller wants the passage from one world to the other to create a “schizophrenic” interaction, a “powerful dialogue” to express and explore the idea of duality.

You couldn’t wish for anything more compatible with Miuccia’s own outlook on life. “It’s very much like me,” she agrees. “I can’t be simple, I can’t be just one thing. I am many people in one.” It's enviable that she has such a vast canvas on which to give all of them ample room to play.