PARIS, France — Sneaker culture has long been the province of men. For years, the typical line-up of sneaker heads waiting for the latest drop was almost completely composed of teenage boys. Not anymore. And certainly not here at Nike’s showroom in a Haussmann-style building in the eighth arrondissement of Paris. As part of its stated ambition to grow its $6.6 billion women's business to $11 billion by 2020, the American sportswear giant has landed here in the City of Lights, during Paris Fashion Week, to unveil Unlaced: a new retail concept that the company is calling “a fantasy sneaker destination for women.”

Major sportswear brands have underserved female sneaker consumers for years. Whereas men have long enjoyed a diverse product offering, their female counterparts have often been left with hand-me-down versions of men’s products made in smaller sizes and released in more feminine colours. “While the sportswear industry is very progressive on many levels, it does think the same way as it has forever, and I think this is a case that really illustrates that,” says Matt Powell, sports industry analyst at the NPD Group.

But the women’s sneaker market is growing fast and major brands like Nike, whose women's business continues to outpace men's in terms of revenue growth, are taking notice. Just last month, the sportswear company unveiled “The 1 Reimagined” — a sneaker pack composed of the Air Force 1 and the Air Jordan 1 remade for women by a team of 14 female colourists, materials specialists, and men’s and women’s mainline footwear designers — that some have seen as a (lesser) version of Nike’s high-profile “The Ten: Icons Reconstructed by Virgil Abloh” initiative. 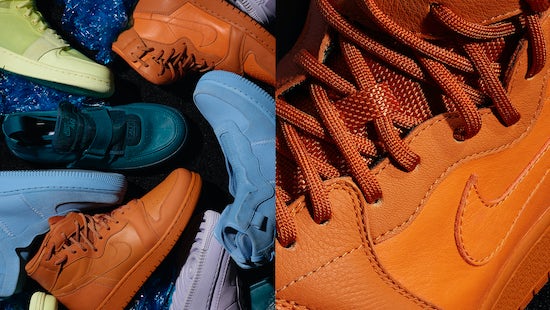 Now, Nike is unveiling Unlaced, a new women’s-focused shop-in-shop concept that’s set to launch online on March 27th and rollout across key Nike stores and select wholesale partners starting with one of Nike’s New York locations this summer. At the Paris unveiling, a theatrical space composed of multiple rooms — a high school locker room installation here, a mirrored room featuring Nike’s most iconic women’s sneakers there — served to showcase the importance of the sportswear firm’s women’s business and the new concept.

Critically, Unlaced will offer a significantly wider sneaker selection in women’s sizes than ever before, including high coveted Air Jordan styles as well as models from popular collaborations such as Virgil Abloh’s The Ten. It will also provide personalised styling services aimed at women and special features for Nike members, like same-day delivery and exclusive shopping hours.

“We’ve been watching women over the last few years, talking to our consumers, and we’ve really seen [them] fuelling the sport and fitness lifestyle overall,” said Amy Montagne, vice president and general manager of Nike Women. “From going for a run in the morning to going to a meeting and taking a yoga class in the afternoon, we’ve seen how sneakers really play into her lifestyle.”

“It all starts with providing access to the products that we know women love — this is extremely important,” added Julie Igarashi, vice president and creative director of Nike Women. “Then, it’s about having a more personal conversation… By showing women the different ways in which they can wear [sneakers], we can remove the barriers that we see.”

“We very much see it as way to connect trend, style and maintain a finger on the pulse locally, but at the same time also give visibility to what is happening in key cities through partnerships with people that are authoritative,” explained Igarashi. Added Montagne: “I believe our potential for our women’s business is pretty endless.”

Disclosure: Christopher Morency travelled to Paris as a guest of Nike.

How Sportswear Brands Are Making a Play for Women