NEW YORK, United States — Opening Ceremony, the epitome of Gen X-alternative downtown style and once one of the most influential multi-brand retailers in the US, is entering the hype machine.

New Guards Group (NGG), the Farfetch-owned platform behind influential streetwear brands Off-White and Palm Angels, has acquired the Opening Ceremony trademark and intellectual property, with plans to take over production of Opening Ceremony’s in-house line. The terms of the deal were not disclosed.

Founders Humberto Leon and Carol Lim will remain at the head of the soon to be relaunched brand as co-creative directors. On Tuesday, they announced that the four retail stores will close in 2020.

"Our curiosity and entrepreneurial spirit have been at the centre of Opening Ceremony since we founded the company and our continued search for innovation led us to this partnership with Davide de Giglio and Andrea Grilli, who have created one of the best global brand platforms in existence today,” Leon and Lim said in a joint statement. “This next step for Opening Ceremony means we get to connect our desire to invent the future and design for our community to a dynamic infrastructure.” 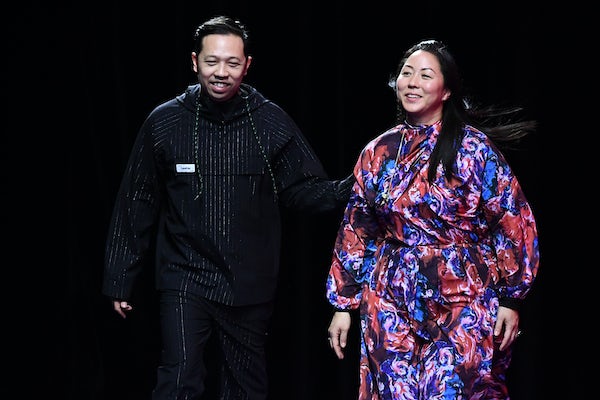 Humberto Leon and Carol Lim on the runway for Kenzo in 2019 | Source: Anne-Christine Poukoulat/AFP via Getty Images

Coming on the heels of Barneys’ bankruptcy and liquidation, the deal closes a chapter in New York retail, one defined by boutiques and department stores that could make or break an emerging brand with their support. Today, new brands sell directly to customers online, and consumers look to social media to discover fresh labels.

Leon and Lim opened Opening Ceremony’s first store in New York in 2002 with their own savings and a small business loan, according to a 2017 profile in the New Yorker. The spot became a meeting place for a generation of stylish creatives and anchored a new retail zone north of Canal Street. In 2011, Leon and Lim were hired as creative directors for LVMH-owned brand Kenzo, designing trendy sweatshirts and accessories that transformed the luxury label. They stepped down from that role in 2019.

In 2013, Opening Ceremony’s in-house line made its much-anticipated New York Fashion Week debut with a flair that would become typical of its runway shows — plenty of celebrities, high production value and eclectic creative contributors ranging from director Spike Jonze to dancer Justin Peck. At one point, the label was available at about 400 wholesale doors.

But attempts to scale the Opening Ceremony brand have faltered.

With a former partner, private equity firm Berkshire Partners, Leon and Lim planned to open more stores that would showcase Opening Ceremony’s own line. That didn’t happen. Instead, reports surfaced in 2018 that the founders were looking for a new investor and later, BoF reported that the business had cut employees in a round of layoffs. Last year, the founders said they had bought out Berkshire’s stake.

New Guards will bring Opening Ceremony’s production to its base in Milan, relaunch the brand’s website on the Farfetch platform and set up a showroom in Paris. The goal is to release products more frequently and expand categories. Currently, the Opening Ceremony brand represents less than 25 percent of the business's total revenue.

The acquisition represents a new type of challenge for New Guards Group, which has continued to add brands to its portfolio since it formed in 2015 and released more than 200 collections last year. Just last week, it also acquired Japanese jewellery label turned streetwear brand Ambush. But New Guards’ efforts until now have focused on launching and scaling emerging brands, not trying to return a faded one to its former glory.

That job is typically undertaken by licensing companies, such as Authentic Brands Group, which buys distressed businesses with major name recognition like Barneys New York and Juicy Couture and brings them back to life — often on the cheap and without the former “cool” factor.

But Opening Ceremony’s credibility with fashion insiders is one of its chief selling points, De Giglio said, adding that he sees a different future for the brand, and Leon and Lim, who were one of the first retailers to pick up NGG-backed labels Marcelo Burlon County of Milan and Off-White.

They are great talents and based on our know-how, we can really help them and push them to be more focused on what they are good at.

“They are great talents and based on our know-how, we can really help them and push them to be more focused on what they are good at,” he said, describing Leon and Lim as trailblazers in the collaborations space, now a common way for emerging and mainstream labels to work together. “They were the first brand to start with this new way of luxury.”

But he thinks their recent efforts have been overlooked, like a collaboration last summer with Polo Ralph Lauren that barely garnered attention. “We need to do something to augment this,” he said.

The acquisition puts in question the fate of Opening Ceremony’s existing stores, including its landmark original Howard Street location in New York, which opened in 2002 and quickly became a destination for Gen X artists, DJs, designers and miscellaneous cool kids — and the site of many fashion parties over the years. The other shops are in New York’s Ace Hotel, on La Cienega Boulevard in Los Angeles and Omotesando in Tokyo.

“In my opinion, physical stores will always be important for any brand,” said De Giglio, adding that Opening Ceremony’s stores may be too large.

At its height around the start of the last decade, Opening Ceremony was a clubhouse for downtown creatives, where Michael Stipe would shop and newly-launched labels like Alexander Wang and Rodarte could be found. Proenza Schouler launched its Target collaboration there, with a line around the block in 2007. The neighbourhood around Opening Ceremony became so popular that the area now includes stores like Maison Margiela, Rick Owens and Reformation.

Director Spike Jonze was often a collaborator on shows, films and images, as were photographers like Ryan McGinley and Collier Schorr. Chloë Sevigny, the ultimate pre-internet New York it-girl, was a muse and still designs collaborations for the store.

Described in 2008 by The New York Times as the most influential retailer of the era, Opening Ceremony was also early to strategies that are now commonplace: merchandising known brands with obscure foreign labels, offering a mix of high and low price points, highlighting avant-garde pieces and nostalgic brands as a point of pride, embracing streetwear as a covetable object and collaborating with mainstream brands on exclusive collections.

But in recent years, the zeitgeist in fashion shifted away from Opening Ceremony, as is visible right on Howard Street. Just two blocks east, dubbed “the corner of hype and Mercer” by New York magazine, is concentrated with coveted streetwear and sneaker sellers. Young people are often found lingering outside Stadium Goods, V Files, Billionaire Boys Club and Nike, just a short walk away from Off-White.

While those same hypebeasts continue to frequent Opening Ceremony, which is located right down the street, it is no longer the nucleus.

However, the strategy to acquire Opening Ceremony aligns with parent company Farfetch’s plans for New Guards: scale brands with devoted followings (and therefore lower customer acquisition costs) through owned distribution channels in order to take a higher margin on each sale.

In recent months, Off-White has cut down on its wholesale boutique accounts and moved more products to direct sale on Farfetch.

Editor's Note: This article was updated on 12 January 2020 to include the announcement that Opening Ceremony's stores will close in 2020.