Oxford Street May Get the Upgrade It Needs

The proposal to pedestrianise London’s busiest shopping street could result in a significant bump in foot traffic, but more work will need to be done in order to burnish the chaotic destination’s reputation.

LONDON, United Kingdom — Oxford Street, one of the world’s busiest shopping streets, may be getting a radical overhaul.

On Monday, London mayor Sadiq Khan unveiled a proposal to transform a section of the street and its surrounding area into the “world’s best outdoor shopping experience,” eliminating car lanes by the end of 2018. If approved by the Westminster City Council, the makeover of the pedestrianised stretch will be completed by 2021 and include bike lanes and an 800-metre-long art installation, as well as additional taxi stands, green spaces and seating.

“Whether you’re a local resident, a business or shop in some of the area’s famous stores, our plans will make the area substantially cleaner and safer for everyone, creating one of the finest public spaces in the world,” Khan said in a statement.

Home to department stores like Selfridges, mono-brand players including Nike and Adidas, fast-fashion giants H&M, Zara and Topshop and a hodgepodge of independent retailers shilling souvenirs and other tchotchkes, Oxford Street attracts over four million visitors from around the world each week and will generate £6 billion ($7.9 billion) a year in sales by 2020, according to the New West End Company, a consulting firm that represents retail destinations including Bond Street, Oxford Street and Regent Street. 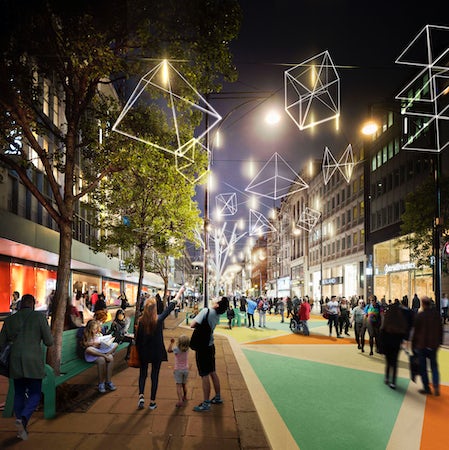 Yet the area is often avoided by locals due to its overcrowded sidewalks and lack of crosswalks, not to mention the chaos of cars, public transport and cyclists. The street is notorious for its lack of structure.

If the proposal is greenlit, fashion retailers on Oxford Street may benefit significantly from a “much-needed boost in consumer traffic,” says Neil Saunders, managing director of market research firm GlobalData Retail. “Many fashion shoppers like browsing and increasingly see their trips as a day out or a leisure experience,” he adds. “As it’s currently configured, it’s difficult for Oxford Street to deliver this. The new scheme should help remedy the issues and make the location more of a destination for fashion consumers.”

However, the popular shopping destination will need more than just a facelift. “There’s no doubt that the retail offer there isn’t as good as it could be,” Saunders says. “There are a lot of shops that are quite tacky and touristy, and the street itself needs a bit of an upgrade.”

That means Oxford Street will need to improve its retail mix, perhaps taking a cue from other transformed areas of the city with tenants that not only include household names but also concept shops, independent labels and pop-up shops. Covent Garden, for instance, is populated with everything from COS to Reebok and Burberry.

Looking beyond fashion to food, health and wellness and entertainment to round out the offering will also be vital to the street’s future success. “Maybe that’s theatre on the street or food carts… really just to get a level of interest in the destination other than retail itself,” Saunders says. “These are the sorts of things that work best in a modern shopping destination.”