NEW YORK, United States — When Apiece Apart opened its first pop-up in 2015, the plan was to keep the store open for three months. That turned into six months, and then a year, as customers flocked to Soho to try on — and buy — the brand’s earthy utilitarian pieces.

The small shop remains open today, on a year-by-year lease, and has expanded to showcase items from other vendors.

This trajectory from pop-up to permanent storefront is not uncommon. Retailers have closed tens of thousands of stores in recent years as they face digital disruption. In this uncertain environment, brands that still want to open stores — a mix of online start-ups and wholesale labels looking to build direct-to-consumer businesses — often want to test the waters with a short lease.

Some landlords stuck with high numbers of vacant storefronts are happy to comply (it helps that many tenants, like Apiece Apart, wind up staying in their pop-ups much longer than planned). Those that don't, retailers and brands say, will continue to lose out on cash, while leases progressively get shorter. Average apparel store leases fell to about four years in 2019, down from five-and-a-half years in 2017, according to real estate research firm Co-Star. Even giant brands like Nike and Coach are incorporating pop-ups into their strategies, finding that it’s an effective way to create hype and acquire new customers.

A pop-up used to be an activation... but what’s happening today is the multiplier effect.

“A pop-up used to be an activation that was to drive a sales or excite people to come to a location but what’s happening today is the multiplier effect,” said Joshua Schulman, chief executive of Tapestry-owned Coach, which opened 130 pop-ups last year and is planning dozens more this year. “When we do these simultaneously and in different locations staged over time, the excitement tends to build [on social media] and often the second set of footsteps are people who were influenced by their friends.”

An entire economy has emerged around the pop-up shop concept, allowing landlords struggling to find tenants for long-term leases to bring in revenue on a more consistent, if less predictable, basis. Start-ups like Appear Here and Splacer tout one-click solutions to pair landlords with brands looking to rent temporary spaces. Naked Retail fills empty storefronts with wares from multiple brands, and will trick out pop-ups with Millennial- and Gen Z-friendly design trends.

Even some traditional property managers are embracing the concept. Brookfield, which has long used pop-ups to fill temporarily vacant spaces in its malls, is testing dedicated short-term spots in certain properties. Short-term leases have become "a very serious part" of the company's strategy, said Brookfield Senior Vice President Melinda Holland.

For landlords, the case for short-term leasing can be made because the price-per-square-foot for pop-ups is often much higher. For instance, Appear Here advertises a 1,500-square-foot theatre space in Soho for $2,543 a day, which equates to an annual rate of $619 per square foot  — or nearly double the average for that area, according to real estate brokerage Cushman & Wakefield.

“It’s lower occupancy but higher calibre,” said Stephanie Blake, chief executive of Skylight Studios, a real estate firm that leases marquee properties like the Ferry Building in San Francisco and sublets the spaces for pop-ups and one-off events. “We don’t need to be occupied 365 days a year.”

Nili Lotan, an womenswear label based in New York, recently opened a pop-up space on Madison Avenue, around the corner from Barneys New York. The designer, who has three permanent stores in New York, said she opened the temporary store to sell extra merchandise she had produced for Barneys before the chain filed for bankruptcy.

Lotan, whose line is known for its unfussy luxe basics, said sales have been so strong that, if they hold up, she’ll sign a long-term lease. The new store has attracted many first-time customers, she said. Even so, she had to call three landlords before finding one willing to allow a short-term lease, even though that stretch of Madison Avenue has plenty of vacant stores.

“Some of these landlords have not faced reality,” she said. “It’s better to take a tenant short term than have no tenant at all.”

The designer has been opening pop-ups for five years, using them to put her clothes in front of new customers and test potential new store locations.

“As a long-term strategy, we could open one, close another and so on,” she said. “We can tour different neighborhoods.”

Appear Here says one in five tenants end up leasing their temporary spaces long-term, and the start-up has added a product to help find longer leases in addition to pop-up spots.

When industries are being disrupted, so often people put their heads in the sand and pretend it's not happening.

Pop-up specialists like Appear Here grew rapidly in part because traditional brokers and landlords were unwilling to accept that short-term leases were becoming a permanent part of the real-estate market. Some have come around; Simon Properties, the biggest US mall operator, has invested in Appear Here, which counts brands such as Apple and Net-a-Porter as clients.

“When I started [Appear Here], every landlord told me to get lost,” said Ross Bailey, the app’s founder. “So often people put their heads in the sand and pretend it's not happening.”

Not every landlord is ready to turn over their space to short-term customers, however.

“Even today, there are some landlords that don't get it yet,” said Bailey. “They want that tenant that signs a 10-year lease… But really, that doesn't exist. The industry of retail doesn't support that anymore.”

Many brands are investing in pop-ups in addition to permanent stores, rather than replacing them. Gucci is the latest major brand to open a series of global pop-up stores, focusing on regions where the Kering-owned luxury giant lacks an existing physical footprint, such as São Paulo, Bangkok, Moscow and Chengdu.

Dubbed “Gucci Pin,” the plan is for the pop-ups to remain open for an average five weeks, with some shops opening and closing over the course of a year in the same city. 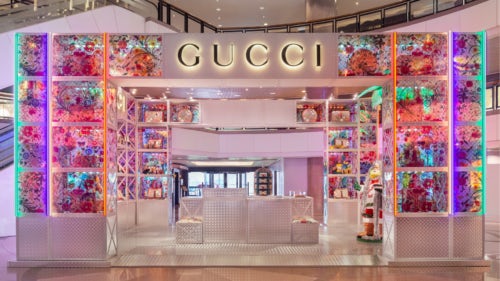 Coach, too, has opened and closed pop-ups repeatedly in the past year. The Tapestry-owned brand has four types of pop-ups: while some are standalone locations, others are inside or near existing stores. The brand sees its pop-up strategy as complementary to its existing network of stores, working with property owners ranging from Hudson Yards developer Related Companies to mall landlord Taubman Properties.

Coach's highest-profile pop-ups are “experiential activations,” where no products are sold but guests go through a “total brand immersion.” The Life Coach pop-up concept for instance is more art installation than retail shop, where attendees walk through a set of themed and thoroughly decorated rooms: one is a forest of “self-discovery,” another a simulated subway station.

“We believe in a mix of different ways to engage the customer, whether it is traditional retail or shorter-term innovations that pop up around the world, or of course, through our digital channels,” Schulman said. “And increasingly you want a symbiotic relationship between all those channels.”