The heritage Australian bootmaker, backed by LVMH private equity arm L Capital Asia, is expanding its global retail footprint, but can its measured strategy prevent another accessible luxury brand from becoming a victim of its own success? 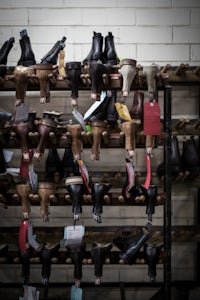 The heritage Australian bootmaker, backed by LVMH private equity arm L Capital Asia, is expanding its global retail footprint, but can its measured strategy prevent another accessible luxury brand from becoming a victim of its own success?

ADELAIDE, Australia — In 1932, camped out in South Australia's Gammon Ranges, Reginald Murray Williams met an itinerant cobbler dragging a dilapidated buggy who introduced himself as Dollar Mick. Despite a 30-year age gap, the pair struck up an immediate rapport and over the following months, Williams convinced Dollar Mick to teach him his craft in the hope of getting regular work. After much trial and error, he fashioned his first pair of boots from a single untreated piece of leather hide, which he sold to a man from Hiltaba Station.

Such were the modest beginnings of one of Australia’s only heritage brands. Today, the bootmaker exports to 15 countries and operates more than 50 retail stores in its native country as well as stores in London, New York and Auckland. R.M. Williams’ masculine-yet-refined boots are carried by more than 900 international stockists including Mr Porter. However, since April 2013, when the LVMH-backed private equity firm L Capital Asia acquired a 49.9 percent stake in R.M. Williams, valued at US$54.3 million at contemporary exchange rates, the bootmaker has been priming itself to increase its international footprint. 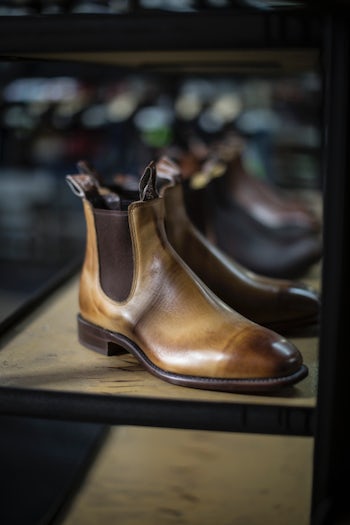 “[Over] the last two years, [we have] invested in the brand and making sure that the story that we're going to tell is going to resonate with international consumers,” says R.M. Williams chief executive, Raju Vuppalapati, who joined the company in the immediate wake of its acquisition by L Capital Asia.

According to Vuppalapati, the brand intends to double its AUS$125 million revenue (US$92.3 million at current exchange rates) over the next four years. “We have built out a retail model and a distribution strategy for select doors in key cities, supplemented by a strong e-commerce platform. We have also invested in people. To become a global company you need the [production] capabilities and [human] resources on the ground to bring that to life.”

In order to achieve its revenue targets, R.M. Williams is strategically focusing on the US, the UK and Scandinavia, where it has been distributed for 28 years, along with significant investment in its e-commerce platform. “Next year, depending on [the availability of appropriate] locations, we'll open five stores in the US and a couple of stores in Scandinavia, one in Stockholm and one in Oslo or Copenhagen and then later on more stores in London.”

The decision to limit R.M. Williams’ retail ambitions to three markets is influenced by the brand’s decision to maintain its production in Australia where there are limited numbers of craftsmen. “Our provenance is important,” says Vuppalapati, who has already invested in training programmes and facilities to build up his workforce and reduce production lead times.

The limited retail expansion plan also reflects a conscious decision to grow in a measured fashion. “We've said, ‘let's be disciplined about how we go at it and curate [our distribution] and tell the R.M. Williams story in a compelling way,’” says Vuppalapati. “Next year, there may be opportunities in Japan and Korea, but that won't be a priority.”

The faster you extend the brand the riskier the development of your brand becomes.

Vuppalapati believes in a more measured approach, however. “You don't build great brands in one day. It takes time,” he says. “Our ambitions are reasonable; we're not looking at opening 200 stores over the next two years. It's about positioning and being focused on what we do the best in that affordable luxury space ... We're not going to pump out a million boots in a year, that's not our business model.”

The current climate is a favourable market for accessible luxury brands. “Most of the growth is driven by the middle class consumer,” says Solca. The world’s middle class population is set to hit 3.2 billion in 2020, up from 1.8 billion people in 2009, according to the Organisation for Economic Co-operation and Development. It predicts that the majority of this growth will come from Asia, which will account for 66 percent of the world’s middle class population by 2030, compared to 28 percent in 2009. 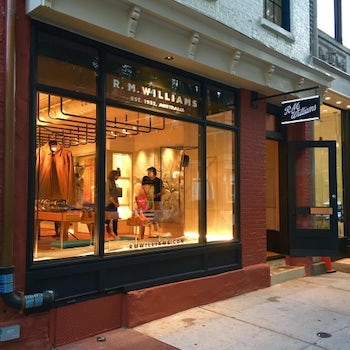 However, in times of global instability, the modest growth of both the middle class and GDP in America remains an attractive prospect. “The US is a peculiar market for accessible luxury, because American brands are mainly focused in accessible luxury, rather than true luxury,” says Mario Ortelli, senior luxury goods analyst at Sanford C. Bernstein. “You have a customer that, even if they have the disposable income that would enable them to buy true luxury, they do not. Because the accessible luxury market is more dynamic in the United States, a new brand — if it has a product with a strong identity that taps into the preferences of the consumer — can find a market there.”

As well as generating revenue, Vuppalapati’s retail expansion strategy is also focused on educating global consumers about the qualities of R.M. Williams’ product and Outback roots by connecting the brand with tourism opportunities, music platforms and digital influencers.

“You have to try and find a unique angle to attract the attention of the consumer,” says Ortelli. “You have to try to advertise, you don’t have millions to invest in flagship stores to enter into the market. You have to use product placement [and] all the opportunities that digital gives you. If you want to enter into America, you have to find a distribution agreement with a department store or a multibrand of some form in order to communicate your brand.”

In the US, R.M. Williams is currently stocked at Need Supply and Assembly in LA, “independents that have brick and mortar and online,” and is testing in Bloomingdales and Nordstrom.

But R.M. Williams should heed the hard learnt lessons of its predecessors and avoid a cannibalistic discounting and outlet strategy. “Everything that is discounted or off-price or a brand extension dilutes the power of your brand. Its perceived exclusivity, its strength, its recognisability — its uniqueness as a brand,” says Ortelli.

How you treat this brand is going to be different to how you treat a five-year-old brand in this fashion cycle that you just quickly scale up.

But, even with the right distribution, distinguishing itself in new markets requires R.M. Williams to communicate more than its Australian heritage. “We're strengthening our e-commerce platform in the US so we have the capacity to work on content that's relevant for the US market. It's about saying, ‘New York is a great city where people walk and have a great sense of style’ and within that context, R.M. Williams fits in perfectly. The boot’s elegance fits the urban landscape in all cities of the world,” says Vuppalapati.

“Boots are the core of the company, it gives us a unique position in the marketplace. But I think another 15 percent should be around craft, we make some amazing belts, which are unique to Australia and the Outback. Things like oilskin jackets, wool, which is fundamental to what we do, the leather [accessories] are the things R.M. Williams came from. That's the other 15 percent,” explains Vuppalapati.

However, Ortelli believes expanding into new product categories should be treated with caution by new-to-market accessible luxury brands. “You want to affirm the brand in the mind of the consumer with an iconic product. When you build a significant position in the market you can enlarge you brand slowly, but in a convincing way in continuous product category: belts, leather accessories etc. But I would not go immediately into fashion. The faster you extend the brand the riskier the development of your brand becomes.”

The success of R.M Williams’ product mix strategy remains to be seen, but Vuppalapati is confident in his plans. “If we grow to 50 stores or 100, so be it, but before we run faster, let's make sure we have the capabilities and then things will take care of themselves. How you treat this brand is going to be different to how you treat a five-year-old brand in this fashion cycle that you just quickly scale up. We don't see ourselves becoming a mass-distributor, but we have a compelling story and we're well positioned in the affordable luxury space.”