A Dover Street Market Alum Breaks Out on His Own

TOKYO, Japan — Arguably fashion’s most celebrated contrarian, Rei Kawakubo is best known for her spirited belief in unadulterated creation. But impressing the notoriously reticent owner of Comme des Garçons and Dover Street Market (DSM) — the cult retail destination she co-founded with her husband Adrian Joffe in 2004 — is no mean feat. Which is why Hirotaka Sasako never expected he would catch her attention. He was wrong.

Sasako joined DSM when it opened in Ginza in 2012, having moved back to Tokyo after completing his studies in the English coastal town of Bournemouth. He had always been “fascinated” with the brand as a student and took on a job on the shop floor, but his impressive sales performance quickly caught the eye of Kawakubo. “She is the most hardworking person,” he told BoF. “But even [though] she is really busy, she keeps her eyes on every employee’s performance all the time.”

According to Sasako, Kawakubo swiftly promoted him — then aged 21, with a skinhead and tattoos — to DSM’s head office, where he became a buyer, despite having no experience in the field. “At the beginning I was mainly in charge of Junya Watanabe Man and Comme des Garçons Shirt. After I became a buyer, I still continued doing sales at the store, because it was something I was passionate about,” he said. “The head office of DSM Japan is small, but they do all the work from visual merchandising to buying analysis. Every day was very busy.”

It's more of a private space. You won't even notice it if you pass by.

Now, the unlikely buyer is breaking out on his own with the opening of his own multi-brand boutique, Godard — its name taken from the French film director, Jean-Luc Godard — in the buzzy neighbourhood of Shibuya on March 5. “I named the store after him because I love the energy, intelligence and spirit of his work,” said Sasako, explaining he picked this particular space, on the second floor of a quiet building across from the sprawling Yoyogi Park, because “I don’t want my customers to feel like they’re in a store, it’s more of a private space. You won’t even notice [it] if you pass by.”

The store will stock progressive labels like Namacheko, Stefan Cooke, Wales Bonner and Ludovic de Saint Sernin, as well as archive pieces from Comme des Garçons, Maison Margiela and Hermès. Furniture from the likes of modern industrial designers Charlotte Perriand and Paul McCobb will be sold from time-to-time. There will also be an area dedicated to Italian tailoring, a selection of books and special installations throughout the year. “I wanted to launch something interesting that we don’t have in Tokyo at the moment,” he said. 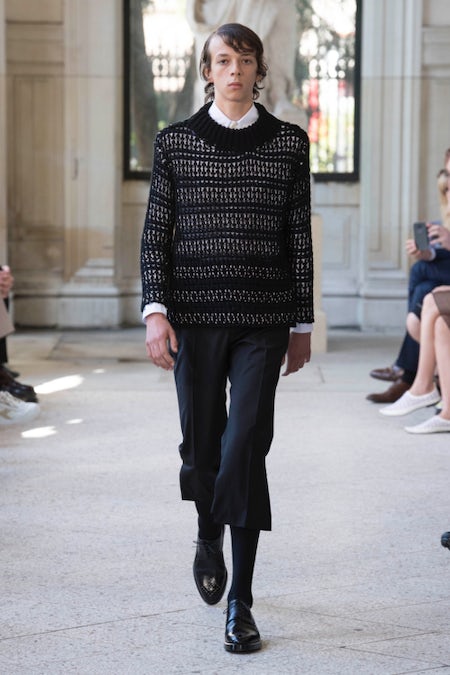 Namacheko spring/summer 2019, which will be available at Godard | Source: Courtesy

Among Godard’s more established and glamorous rivals are Gr8, a streetwear paradise founded by Mitsuhiro Kubo — it stocks brands like Balenciaga, Martine Rose and Alyx — and Restir, the edgy Japanese counterpart to MatchesFashion.com, whose creative director and buyer Maiko Shibata is often spotted on the fashion week circuit, snapping up labels like Jacquemus and Simone Rocha. Meanwhile, Fake Tokyo, led by chief director Shogo Yanagi, backs designers like Eckhaus Latta, Gosha Rubchinskiy and Rejina Pyo, who are heralded for their experimental designs. There’s also new competition from Union, the brainchild of Mary Ann Fusco and Supreme founder James Jebbia, which opened its second outpost in Tokyo in 2018, marking its first new space in 27 years.

For Lezan Lurr, who launched the much buzzed-about menswear label Namacheko with her brother Dilan, Godard was a good fit for her brand, because "it also looks into the world of art and architecture" — topics that are of frequent inspiration for the accidental designers. In addition to 25 other stockists across Japan (out of 48 worldwide), Namacheko's spring/summer 2019 collection will be sold at the opening of the store, with pieces such as the Borujerd suit, Tawagozi trousers and Zirek knitwear.

Sasako emphasised that the appeal of his shop is “not just about selling garments. I would like to have conversations with my customers, like when you go to a tailoring shop for bespoke suits,” he said. “I believe that the ‘chaos’ I’ve learned from Rei can be represented through Godard.”

The launch comes at an interesting time for Japan’s luxury industry. According to Bain & Company, luxury purchases in Japan softened slightly in 2018, although retail sales grew at 3 percent at current exchange rates to €22 billion ($25 billion). It’s thanks to big spenders from China, as well as neighbouring countries like Indonesia, Thailand and Vietnam, who are making their mark on Japan’s travel retail market during peak tourist seasons like “hanami” and “koyo.”

In light of the 2020 Tokyo Olympics, tourists are expected to further boost the luxury market — especially if the Japanese government takes measures to improve the nation's readiness to welcome them.