Can Roger Federer Help Build the Next Big Sportswear Brand?

The tennis legend and cult running shoe label On are launching a sneaker together. In the latest edition of the BoF Podcast, Federer shares what's next.

ZURICH, Switzerland — It’s been 17 years since Roger Federer won his first Wimbledon championship. Now, the 20-time Grand Slam winner is commemorating the date with the launch of his first sneaker for Swiss running label On.

Named “The Roger,” Federer’s debut is inspired by a tennis shoe, but it’s designed to be much lighter and intended for everyday wear, rather than professional sports. As with On’s more performance-driven trainers, the shoe is outfitted with the “CloudTec” technology (a special sole designed to enhance the running experience) for which On is best known. The company’s first “Cloud” performance sneaker, launched in 2010, quickly gained traction among the running community.

Federer’s tie-up with On is much more than the typical ambassador-brand relationship. For starters, he invested an undisclosed amount in the company last year, consulting for the brand before signing on to co-develop product. As the tennis star put it to BoF's Imran Amed in an exclusive interview for the BoF Podcast, he wanted to see if it would be possible “to create a deal and partnership that is more than the pay-to-play deal.” 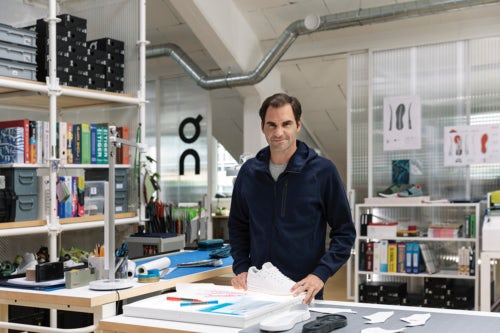 The Roger sneaker was created by Roger Federer and On | Source: Courtesy

Close collaboration between high-profile sports stars and brands have a proven track record. Perhaps the most successful is the relationship between former NBA player Michael Jordan and Nike, which also started out as a running shoe company. The Air Jordan franchise, first introduced in 1984 and propelled by the stardom of Jordan himself, has been a major boon for Nike over the decades, and still holds cultural sway today. For the financial year ending May 2019, the Air Jordan Brand brought in $3.1 billion for Nike, 8 percent of the sportswear giant’s overall revenue.

The first drop of The Roger — the Centre Court 0 Series — will be limited to 1,000 pairs, available for purchase via a lottery draw on the brand’s website or in store at Dover Street Market outposts globally. But Federer is aiming for longevity, not a quick hit.

“I know the first pairs that drop will go — we know that. The question is going to be, ‘Where are we going to be in a year from now?,’” he said. “We’re going to try and work as hard as possible to make it as cool of a product for people to wear. For me, I measure success when I see people wearing it.”

Federer has held lucrative endorsement deals with Nike, Uniqlo and more throughout his career, but this is the first time he’s put both his own money and his star power into an upstart like On. The company, founded in 2010 by entrepreneurs Casper Copetti, David Allemann and former professional athlete Olivier Bernhard, declined to share its revenue figures, but said it’s been profitable since 2014. Its signature Cloud sneaker model, which pitches itself as “the world's lightest running shoe,” has been a hit with celebrities and professional athletes alike. Today, the brand also sells apparel and hiking boots.

I know the first pairs that drop will go — we know that. The question is going to be, ‘Where are we going to be in a year from now?

On is something of a rising star, finding fast growth in a market long dominated by the likes of giants Nike, Adidas and Asics. “On certainly has the potential to be a major player in the sport shoe business,” said Matt Powell, senior sports industry advisor for The NPD Group, pointing to the company’s rapid sales growth in the US.

But in the $135.5 billion market for sports shoes — dominated by Nike and Adidas, which hold 23.3 percent and 15.5 percent of the global market respectively, according to Euromonitor International — grabbing significant share is not easy.

Outside of athlete circles, On remains a niche name. Sales growth has more than doubled in the US this year, but its market share of performance running shoes in the country is still just 1.6 percent, according to NPD. Yet, in parts of Europe, brand recognition is high. In Germany, On holds 10 percent of the running shoe market, while in its home country of Switzerland, it’s 40 percent, Swiss news outlet SWI reported last August.

“On Running has outpaced the market prior to and during the pandemic. I expect that trend to continue,” said Powell. “[It] is providing a unique product both in look and ride.” 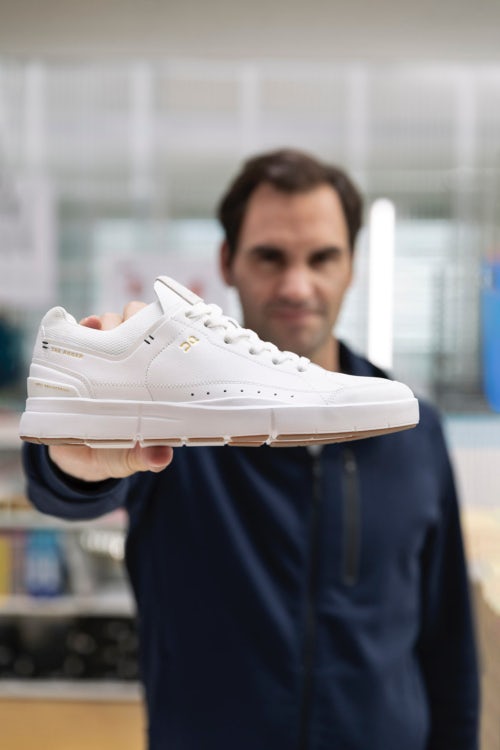 Federer has high hopes, too.

“It’s a Swiss company that wants to grow worldwide,” he said. “They’ve already taken big strides, and maybe I can help them with this final push.”

Federer’s status as one of the most famous tennis players in the world could bring unprecedented global exposure for On. He has 7.7 million and 12.6 million followers on Instagram and Twitter respectively and generates substantial value for brands that he mentions in his feeds. For instance, he generated $3 million in “earned media value,” a measure that quantifies the dollar-value of digital content, for Nike between 2016 and 2018, according to marketing technology firm Tribe Dynamics.

There’s also the reach he has on the tennis court. For now, the tennis star still wears Nikes, a brand he formerly worked with for 24 years, during play. (He exited that endorsement in 2018 and signed a reported $300 million deal with Uniqlo — but since the Japanese apparel company doesn’t make performance sneakers, he can wear whichever shoe he wants to play.)

That could change if On developed a performance tennis shoe.

“The thing about performance shoes: it’s got to fit absolutely perfect[ly],” Federer said. “I do believe that probably one day I will play with an On tennis shoe. That’s got to be the goal, I believe. If it’s still going to be while I’m still active or not? We’ll have to see if we’re going to make it in time.”

How Are Sports Brands Marketing Without Sports?