LONDON, United Kingdom — When Renée Zellweger squeezed her way into a pair of voluminous beige “scary stomach-holding-in pants” in the 2001 hit film "Bridget Jones’s Diary," she brought attention to an unglamorous underwear staple found in the wardrobes of women around the world.

But after nearly two decades dominating the shapewear market, Spanx — the waist-cinching, thigh-pinching US shapewear brand that launched in 2000 — is facing new competition in a swiftly changing consumer landscape.

The current cultural emphasis on women embracing a positive self-image is mirrored by a revolution quietly percolating through the women’s undergarment market, helping to disrupt an industry that has previously promoted force-squeezing bodies into slimming compression wear. During an interview with The New York Times in 2015, Tracee Ellis Ross described Spanx as “hurt[ing] like the bejesus,” stating that she strongly “promote[s] pushing against this culture of perfection.”

The most notable example of pushback is Rihanna’s inclusive lingerie brand Savage X Fenty, which, when it launched in May 2018, took direct aim at Victoria’s Secret’s antiquated view of female beauty with a Fashion Week extravaganza starring models of all skin tones and sizes.

“Women are dressing for themselves and they care about style and comfort. While shapewear used to be used to compress one’s body, it is now used to enhance one’s shape and maximise comfort,” said Ayako Homma, beauty and fashion consultant at market research provider Euromonitor International.

Women are dressing for themselves and they care about style and comfort.

For brands who strike it right in the underwear sector, the rewards are sizeable. Euromonitor valued the worldwide market for women’s underwear at $83 billion in 2018 and expects 4 percent growth in 2019.

While Euromonitor doesn’t break out numbers for the shapewear market alone, demand within that segment is also on the rise. According to fashion search platform Lyst, online searches for shapewear increased 93 percent between October 2018 and September 2019. New entrants to the market — including Kim Kardashian West’s Skims and British start-up Heist Studios — are hoping to redefine the mainstream perception of shapewear.

Skims, which launched in September 2019, promotes its compression pants and waist trainers as “It” items. Polaroid shots of Kardashian West wearing shape-defining shorts while lounging at home populate the brand’s Instagram feed, which already boasts over 800,000 followers. Its entrance into the market caused a 45 percent jump in online searches for compression garments, according to Lyst.

“Skims might well be understood as a fashion brand that happens to do solutionwear,” said Jens Grede, co-founder of cult jeans label Frame Denim who is also a partner and board of directors member at Skims. “Why would we look at this category [of clothing] any differently from a fashion brand?”

That Skims was widely reported to have hit $2 million sales within minutes of its launch is testament to the power of its Jenner-Kardashian family-led hype. But a celebrity connection isn’t the sole reason for the brand’s success. Skims’ “solutionwear” collections resonate with current consumer preferences for products that enhance, rather than straighten, existing body shapes. Their “sculpting shorts,” for example, use only a single layer of compression fabric to accentuate natural curves.

The brand also markets itself as size-inclusive, with products ranging from XXS to 5XL. (By comparison, Spanx products are available in sizes XS-3XL.) Making shapewear in an even broader range of sizes is a radical move for the industry, but what also sets these new players apart is their product offering in multiple shades; Skims’ shapewear is available in nine nude colours.

“When Rihanna came out with Fenty Beauty, which has a huge shade range, it was immediately welcomed by the community,” said Leah Adams, head of marketing at Tribe Dynamics. “I can’t see Skims not being welcomed in the same way.” 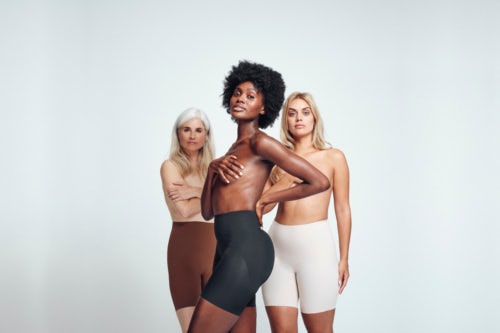 Brands are also looking to gain consumer attention with new technologies that promise the smoothing effects of traditional shapewear without the associated pain. Heist Studios, launched in 2014 by Edzard van der Wyck and Toby Darbyshire, takes an engineering-led approach to product innovation.

While standard shapewear is made by knitting together elasticated yarns, Heist’s shapewear is meant to mimic the human body’s internal support structure using fabric-bonded membranes with 20,000 laser perforations.

In response to new market entrants, more established underwear brands are re-evaluating their shapewear offering. For instance, Italian luxury lingerie label La Perla plans to launch a more diverse range of products in 2021. “Existing players address very specifically the functionality of shapewear at a fair price,” said La Perla Chief Executive Pascal Perrier in an interview with BoF. “But it is not luxury. It is not sophisticated. We see Jennifer Lopez wearing Spanx. She should, honestly, be wearing La Perla, of course.”

For Spanx, a revised communications strategy signals efforts to shape its product according to the latest wave of gender-focused social activism. In 2015, it began including feminist-inspired slogans on its packaging. But there’s still a long way to go. The idea that women have to slim down to make themselves sexually appealing doesn’t align with the values of today’s body-positive feminist customers.

Editor’s Note: This article was corrected on November 28, 2019. A previous version of this article misstated Spanx saw a spike in sales on the back of the Bridget Jones franchise.

The Return of the Hyper-Sexualised Male