As the nature of his business changes, the British designer will merge his design teams and collapse his many diffusion lines into two collections comprising both men’s and womenswear, with four drops a year. 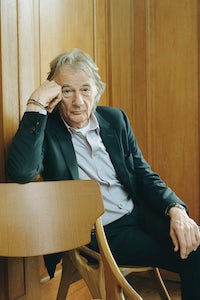 As the nature of his business changes, the British designer will merge his design teams and collapse his many diffusion lines into two collections comprising both men’s and womenswear, with four drops a year.

LONDON, United Kingdom — “I think the world has gone mad,” says Paul Smith, the Nottingham-born designer whose business remains, after 45 years, one of the leading lights of British fashion. “There’s this absolute horrendous disease of greed and over-expansion and unnecessary, massive over-supply of product.”

And in time for the Autumn/Winter 2016 shows, the house — hot on the heels of Burberry and Marc Jacobs — has slimmed down its brand hierarchy to produce only two “collections”: Paul Smith, and the more affordable PS by Paul Smith. There will be four deliveries annually for each; and, curiously, menswear and womenswear pieces will feature in both, as well as shoes and accessories.

Previously, there had been many more lines. In menswear alone there was Paul Smith Men’s, Paul Smith London, PS by Paul Smith and Paul Smith Jeans. “At one point, I counted 27 or 28 [lines],” he laughs. The new Paul Smith mainline will feature suits for men from £1,000 (about $1,435), cashmere and LBDs (little black dresses) for women, while PS by Paul Smith will include polos, jumpers and jeans. The cost of restructuring, which includes a reorganisation of the design teams, is close to £1 million.

There are multiple reasons why the self-trained designer, whose name appears above around 370 stores and shop-in-shops worldwide, is regrouping. The rapidly changing nature of the global fashion industry has presented challenges to his wholesale model. He built up a business comprising so many lines because a variety of product and price points suited his model of selling to small independents and department stores. But last year, wholesale sales were down 11.3 percent and operating profit (before exceptional items of £11,046,000) was down by 41.8 percent. Along with the restructuring, the major distribution channels are also being reviewed. How did this happen?

Last year, the Paul Smith business turned over close to £200 million, with 50 percent coming from wholesale, 40 percent from retail, and the remainder coming from licensing operations, primarily in Japan. Overall group turnover was down 8.4 percent. But the online business increased 12 percent. Based on Autumn/Winter 2016 pre-collection orders for the new lines, combined with positive e-commerce sales, Smith says, “We’re back on target” for 2016.

“We’re completely aware of what we’re doing. It’s not scary, it’s just a readjustment. There must be so many brands out there that are just locked into this formula that they can’t get out of and I just said, ‘We’re stopping that. We’re not doing that anymore.’ I’ve sat round this table so many times with my sales guys saying, ‘If you put Paul Smith on here, we could sell 4,000 t-shirts next week.’ But I’m not going to do it. It’s about about keeping your feet on the ground and focus.” On paper, a restructuring might look like an exercise in lowering his operation’s headcount (approximately 1,000 people), but he insists not, rather relying on natural attrition. “If somebody has left then we haven’t replaced them. Or if we have, we’ve replaced them with a different head type of designer... We’ve hired from Céline, Saint Laurent, Louis Vuitton. We have quite a strong number of female staff, and often they start families or their husbands move away, so this is only natural — people leaving naturally.”

Restructuring the lines will not affect his business in Japan, where he boasts over 200 stores and department store corners, and multiple lines. In 2006, Itochu, his Japanese licensee, bought 40 percent of the entire Paul Smith business, more than 20 years after Smith opened his first store in Tokyo in 1984. “We have several lines there. There’s one called Paul Smith collection, which is one of ours that is unique for Japan. I think that’s got 28 shops and that’s high-level men’s collection — handmade. But the shops are quite small. I mean, 30 to 50 tsubos [the traditional Japanese unit of measurement, equivalent to 3.3 square metres]. The only difference is that it’s made there and so the prices are good for that market.” The Japanese business brings the total value at retail of the Paul Smith business to £804 million.

Owning 60 percent of his business, an empire spanning 66 countries, makes Smith a rarity in British fashion. “We’ve never been number one thank goodness; we’ve never been too trendy thank goodness; we’ve never been the press’ favourite. But we’re the only big independent fashion company in the country,” he says, having decided not to take his company public. “The joy of being an independent company and not having shareholders that are looking for more and more and more every year is the fact that you can go backwards to go forwards.”

And being the majority shareholder affords him the right to make bold — even costly — decisions to keep the brand on-brand. “Recently, I took away several really popular items including this famous striped shirt that was worth a million pounds. When my sales people say: ‘Oh, we sell 2,000 of that,’ I start going green. Most bosses would be going, ‘Make it again.’ I’m into the longevity of it. I own this building. I own all the warehouses, I own Westborne House, I own a building in New York, I own a big house in Paris, a building in Milan. I’ve just always put our money back into being solid, being very down to earth, very ordinary, old fashioned you could say — but a very traditional approach to business.”

Rarely has a designer, or design team, produced men’s and womenswear with equal aplomb, so the decision to merge departments comes with its own set of risks. But Smith is remarkably undaunted: “The feedback we keep getting is can the women’s have the spirit of the men’s. So wherever possible, we use the same colour palette. If it’s a double-breasted jacket for men, we have the same for women, the same cut and the trousers. There’s a coat called an Epsom coat that we do for both. So we are trying to bring them closer together — which was the original concept.” Fewer lines will mean fewer products, but Smith envisages a gradual reduction over the next two years by 5 or 10 percent each year. “There’s this permanent collection that you keep going, so that eats a lot of your options up straight away.”

With the restructure comes a new floor plan for his head office, a six-floor building on Kean Street in Covent Garden, which he bought in 2000. From now on, both men’s and women’s will sit next to each other. “The dream is to run in parallel wherever possible, but still obviously keep the femininity. Imagine that you’ve got a PS shop somewhere, it could be 1,000 or 2,000 square feet, but when you walk into it, there will be this harmony: so you’ll see navy blue, pink, lemon for men’s and navy blue, pink, lemon for ladies.”

Smith maps out the production line benefits to be had once both collections share the same mood board. “Obviously you can negotiate on the price of the fabric, because if you buy more, then you can say: ‘Can you help us with the price?’ So that helps you either with your profit margin or with your retail price. And then the other thing is practicality. We have big warehouses in Nottingham. One of the warehouses has got 90 staff for instance. We send out three and a half million pieces of clothing a year from just that one warehouse. And then we’ve got a fabric warehouse and we still check all the fabrics on machine to make sure there’s no faults, so if you’ve got the same fabrics for both then obviously it’s just one job rather than two jobs. So it will have practical aspects to it.”

Of course, there are challenges, including the simple fact that men and women are built differently. “It’s not always possible because the men’s is too heavy for the women’s, or some countries don’t wear suits, they just wear shirts and trousers.”

The end game is for the production timeline for both men’s and women’s to run parallel, although it will take some time to adjust, because menswear sells in January and June and women’s is February/March and then September. “For Pre-[Fall], you can do it a bit more.” Smith left school at 15 with no formal training. He met his wife, Pauline Denyer, a graduate of The Royal College of Art, “in the era of couture fashion” and she taught him the basics. He learned to cut a pattern and make a suit and the business expanded “in this very gentle way,” from a 12 square foot menswear shop in Nottingham.

“One of the joys of leaving school at 15 and being self-employed is the fact that at some point, I’ve done it; I’ve packed the boxes, I’ve written the invoice, I’ve cut the pattern. There’s a lot of practical things that I know about.” In 1976, he showed his first collection in Paris and in 1993, he started a womenswear line.

“Grace Coddington featured my white shirt for men in Vogue photographed by Bruce Weber. So when I started the women’s, it was very much about menswear for women and suddenly the press start saying: ‘Can we have a fashion show?’ And, ‘Where’s your dress? Why isn’t there a skirt?’”

He will continue to show menswear in Paris and women’s in London, plus a presentation at London Collections: Men, which “to be frank, we do to support Britain. We don’t need to do it at all.”

“The practical reason for different shows is that the audiences are different — there are men’s shops and women’s shops, men’s buyers and women’s buyers, men’s press and women’s press and so on,” Smith explains. As for showing in separate cities, it’s a quirk of how the brand has evolved. “Paris is where I’ve always shown my men’s collection. When I first started out in ’76, ’77, there wasn’t a men’s fashion week in London, New York, Milan or even Florence. Paris was all there was. I’ve stayed loyal to Paris.” He employs around 30 staff in the city, working out of a studio in a six-floor 17th century house in Le Marais. “The majority of our international partners and retailers go to Paris to buy the menswear so it makes sense for us to be there. And for women, we started out in London and so the same is true, we’ve remained loyal to here too and built our business in the city.”

“You’ve got to flow with the river,” Smith concludes. “That’s the job of the fashion designer. It’s always about today and tomorrow. Nobody cares how good you used to be. I’m just so full of energy and ideas and I think I was just pumping out too much stuff. Luckily, I have honest, young staff saying, ‘I think we should focus more.”