SAN FRANCISCO, United States — Supreme, the skate brand that has turned its carefully cultivated street ‘cred’ into a billion-dollar fashion cult, opened shop this week in San Francisco, a city that is grappling with its own tension between counterculture and capitalism, raising questions as to how much further the label can grow while maintaining its cool.

The opening of the new Supreme store, its twelfth retail outpost, is one of the brand’s first major moves since private equity giant Carlyle Group paid around $500 million for a roughly 50 percent stake in the business in 2017, though the company has been considering a presence in San Francisco for almost a decade and pinpointed its Market Street location — now wedged between a coffee shop attached to the headquarters of software company Zendesk and a free community arts centre for local residents — about five years ago.

For Supreme, success here is likely to require a delicate balancing act, though the brand would never explicitly acknowledge it: luring the young male ‘tech bros’ who are more likely to ride motorised scooters than skateboards and have the disposable income to buy plenty of Supreme’s t-shirts and hoodies (even when they go for hundreds of dollars on the secondary market), while staying credible in the eyes of the city’s vibrant skateboarding scene, populated by tribes of young self-described misfits famous for ‘bombing’ the city’s steep hills.

The local skate community has grown in the last decade and was recently shaken and united in grief following the deaths of legendary Thrasher Editor-in-Chief Jake Phelps, who led the influential, homegrown skateboarding magazine for 26 years, and young daredevil skater Pablo ‘P-Spliff’ Ramirez, a key member of the city’s GX1000 skate crew and part of Supreme’s network of riders, who died in a truck collision just a few blocks away from the new Market Street store.

Market Street and the surrounding area are ground zero for the clash between San Francisco’s progressive, counterculture roots and the tech-driven gentrification that is remaking the city. It is dense with homeless people, drug use, theft and the occasional surge of violence despite the city’s success in luring the likes of Uber and Twitter to the street. A few skaters waiting in line for Supreme’s opening party on Wednesday night wondered how long it would take for the store’s iconic ‘box logo’ sign, hung above the main window, to be stolen. Not long was the consensus.

But the Market Street location has historical significance for Supreme and the bands of skaters who travel along the thoroughfare on their way to the Embarcadero, a go-to skating spot in the 1990s that is still popular today, said the label’s San Francisco store manager Berto Liechty.

Supreme stores, which employ security guards to manage queuing crowds, are designed to be de facto clubhouses for local skaters to gather as much as places to simply buy products. They send a signal to would-be shoppers eager to join or at least affiliate themselves with the tribe, even though these consumers might never pick up a skateboard (and, in San Francisco, could be harder to attract, given the local population's preference for displaying status by wearing anti-fashion brands like Patagonia over fashion items). 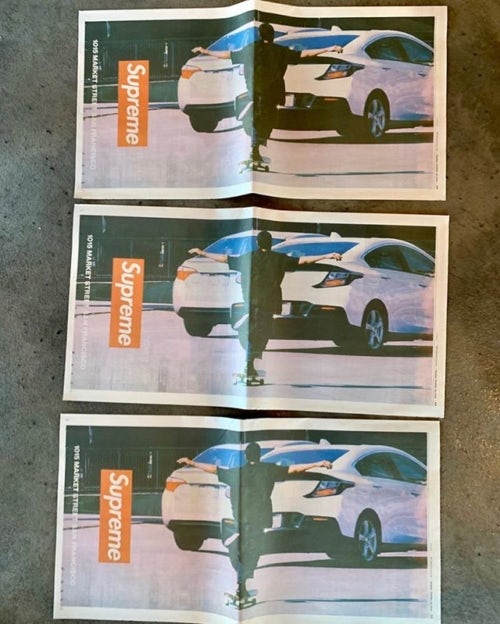 Like at its other locations, Supreme’s San Francisco store is staffed by local skaters like Cher Strauberry, a transgender musician. Before the opening, videographer William Strobeck spent more than a year popping in and out of the city filming skaters for his latest video Candyland, which debuted ahead of the store opening on Tuesday night at a club in the Mission District and which features superstar skaters from Supreme’s New York roster, like Tyshawn Jones and Sage Elsesser, as well as well-known locals like Sean Greene and Ramirez.

“Phrasing it in that retail sense is just not the way skateboarding mentality is,” said Liechty, who has worked for Supreme since 1996 and launched its Los Angeles store in 2004, when asked about the decision to open the label’s latest store in one of San Francisco's rougher areas and how that might impact sales. “We never shoehorn a shop or just do it because we can.”

At the opening night party for friends of the brand, neighbours and local allies, skaters took turns on the store’s suspended wooden bowl, built by Steve Badgett, the artist who also created the bowl for Supreme’s Brooklyn store. The approximately 4500-square-foot San Francisco space looks similar in layout to the brand’s Brooklyn location and features sculptures by skater-artist Mark Gonzales, as well as benches that resemble the marble blocks that once lined Market Street and were favourites for skating.

Why can’t the tech-heads come check us out?

Supreme also paid tribute to Ramirez, who was the subject of a full-page advertisement in Sunday’s San Francisco Chronicle. News of his death in April spread throughout the city, beyond the skater community, said Thrasher publisher Tony Vitello (his father co-founded the publication in 1981). The loss of Phelps and Ramirez brought local skaters together, he explained, “but they also brought some attention to us from the outside and maybe helped people look upon us with more compassion.”

“[Supreme is] going to bring a lot of activity and commerce to a part of town that desperately needs it,” Vitello added, describing the Market Street area, where Thrasher opened its own small retail store last year, as the “wild west,” welcoming skaters who are often chased away from more affluent parts of town for making too much noise or skating on public structures.

“You can do things in that neighbourhood that you might not be able to do in other neighbourhoods,” he explained, citing a crowded memorial for Ramirez held in an alley next to the Thrasher store that was not stopped by neighbours nor the police.

In the 1980s and 1990s, San Francisco was one of the most important skating destinations in the country. In recent decades, rising rents have made the city less hospitable to those without six-figure tech salaries, but the skate scene is growing again.

“There’s more and more skateboarders coming here than you would ever expect given the rent increase and the gentrification,” said Ryan Garshell, a local skater who films videos of the GX1000 crew for Thrasher and contributed to Strobeck’s San Francisco project.

Supreme remained silent on any plans for future retail expansion, though it has previously hinted at a possible Berlin opening. That said, additional store openings, much like San Francisco, are likely to remain focused on places where Supreme can tap into an authentic local skate scene and build the kind of clubhouse-shop that helps to nurture its community and credibility as well as grow sales.

But just how much Supreme can continue to scale while maintaining its 'cred' factor remains to be seen. One thing's for sure, private equity partner Carlyle will want to significantly boost sales before ultimately seeking an exit.