Despite a highly saturated market, startup labels are breaking through thanks to the enduring popularity of the minimalist trainer. So, how does a new brand sell such a simple shoe? 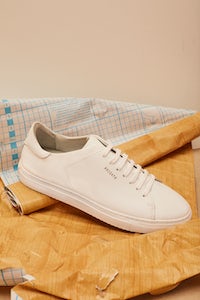 Despite a highly saturated market, startup labels are breaking through thanks to the enduring popularity of the minimalist trainer. So, how does a new brand sell such a simple shoe?

LONDON, United Kingdom — Since 2014, when Swedish sneaker brand Axel Arigato launched, shopping for a simple white sneaker hasn't been much of a challenge. Consumers can hit up legacy players such as Adidas and Nike for a Stan Smith or an Air Force 1, or, for a more upscale proposition, they can turn to higher-end labels like Golden Goose or Common Projects. Even luxury labels like Saint Laurent and Alexander McQueen have options.

But Axel Arigato has, in its five years of business, managed to carve out a niche for its box-fresh kicks in a continually crowded marketplace. The brand is on track to hit €21 million ($23.8 million) in sales this year, up from €12.3 million in 2018. It now has four flagship stores across Europe and is stocked by leading global retailers including Le Bon Marche, Ssense, Lane Crawford and Selfridges. Despite a broad range of silhouettes on offer, its £160 signature Clean 90 sneaker remains the brand’s best-seller.

Axel Arigato isn’t the only upstart that’s successfully built a business around a minimalist white sneaker style. Brooklyn-based Greats, also founded in 2014, had net sales of around $13 million in the year ending June 2019, and was acquired by Steve Madden in August (the terms of the deal were not disclosed). Its flagship sneaker is the simple $179 Royale, with white among the most popular colours. 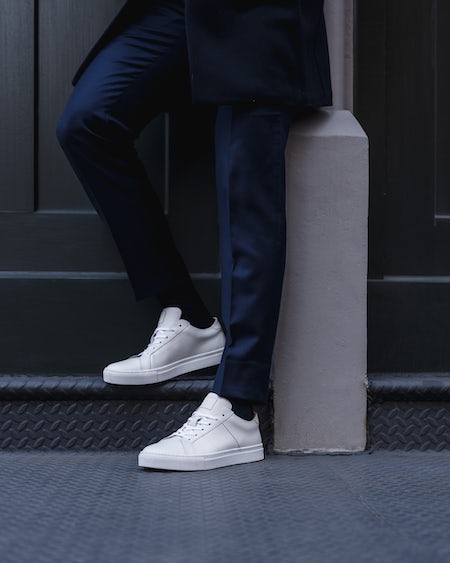 There’s also Koio, which launched in late 2015, and saw 400 percent year-on-year growth in 2017. The company does not disclose financial figures, but has raised $10.3 million in funding to-date from investors including Founders Fund and Acton Capital, as well as actor Miles Teller and producer Simon Kinberg. Koio’s offering of silhouettes is produced by a Chanel-owned Italian factory. Its best-selling style is the $250 Capri Triple White.

All three of these sneaker brands have managed to break into a highly saturated market by offering simple, sleek leather styles at an accessible price. But this isn’t just about affordability; it’s about value for money. They are producing high-quality shoes, at a much more competitive price point than the market has traditionally seen.

Combined with a digitally native retail strategy and powerful brand story, Koio, Axel Arigato and Greats have been empowered to compete with both high-fashion labels and global mega-brands like Adidas and Nike to sell what are, essentially, still simple white sneakers.

The $100 billion global sneaker market has boomed in recent years, in part thanks to the rise of streetwear culture. More broadly, the continued casualisation of clothing has catapulted sneakers into the mainstream in an unprecedented way. According to NPD, sport leisure is set to surpass fashion as the largest footwear category in the US, the world’s largest market for fashion second only to China. And, even as streetwear’s fashion influence starts to decline, classic white styles have the ability to transcend hypebeast sneaker trends, like the chunky “dad” shoe.

Axel Arigato, Greats and Koio are riding the wave of a rising demand for minimalist styles that are versatile: smart enough to wear to work, casual enough to wear at the weekend, while still being comfortable and good-looking, the two key purchasing considerations for consumers in the footwear category. And, despite the accessible price-point, they all play within the luxury category by offering products made from high-quality leather.

Ten years ago we had three wardrobes: for work, working out and the weekend. Now, for many people, it’s one wardrobe.

All three brands have created a style available year-round, but offer newness with alternative colourways and fabrics. Since its launch, Axel Arigato has operated a “drop of the week” model, ensuring a constant flow of new products. Rather than a new silhouette, this is usually an existing style made in a new colourway or material. “We’re not releasing more product than any other brand. We just release it in a different way,” said brand co-founder Max Svardh.

Shoppers are also attracted by the price of an Axel Arigato shoe, which comes in at a much more accessible level than other luxury leather sneakers in the market. Common Projects sneakers retail at $415, while Saint Laurent models can reach $520.

Axel Arigato, Greats and Koio are able to maintain margins by focusing on their direct businesses. All three brands began as direct-to-consumer e-commerce propositions, branching into physical retail with brick-and-mortar stores and pop-ups, as well as select wholesale partnerships. This allows shoppers to see first-hand the value proposition on offer. 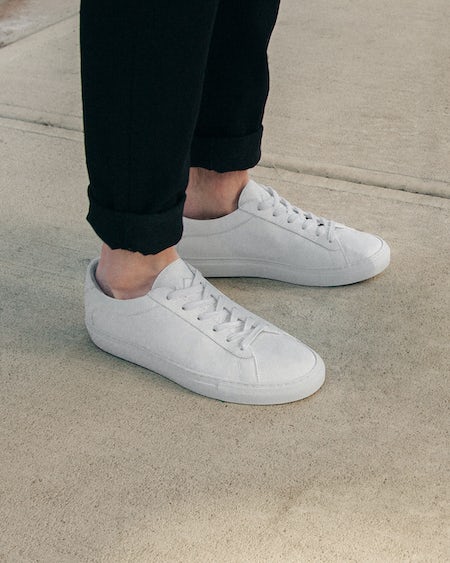 “We want customers to see [our shoes],” said Koio co-founder Chris Wichert. “It’s so much easier to get them to like the shoes if they see it, feel it, put it on their feet. For us, [quality] is a huge differentiator, and if you’re looking at pictures online, you’re not going to get that.”

Greats founder Ryan Babenzien said that when he started the brand, he had always planned to explore physical retail in the future. Today, about 90 percent of brand sales come from its e-commerce platform, with the remaining 10 percent split between a wholesale partnership with Nordstrom and a Greats store in SoHo, New York, where conversion rates are nearly 50 percent. There are plans to open additional stores in the near future.

“There is really a shared value in having all three of those channels of distribution working well together,” said Babenzien. “Having a retail presence and having additional wholesale accounts will drive additional awareness to the brand overall… but there is some incremental value of marketing brand awareness just by being present in the world.”

But what makes a customer buy a white shoe from one brand, rather than an almost-identical white shoe from another? Value for money is a factor, but pricing alone isn’t enough.

“The brand needs to stand for something,” said Axel Arigato co-founder Albin Johansson.

Veja, for example, which was founded in 2004, has built a reputation as the “green” luxury sneaker, made with sustainable materials in a transparent supply chain. About three years ago, growth accelerated, with sales soaring 70 percent to €30 million ($34 million) in 2018.

The brand needs to stand for something.

For Axel Arigato, in-store events help to communicate the brand’s values to consumers, fostering a community of fans. These can range from sneaker customisation events to pop-ups and guest appearances. Koio too, will often stage events around special collaborations, which are a way to build on the brand’s story by generating press and attracting new customers. Recently, it collaborated with tattoo artist John Boy on a limited-edition shoe, staging a shopping event where customers could bundle-buy a pair of sneakers with time with the tattooist.

To be sure, incumbents like Adidas and Nike are in no danger of losing their megabrand status, and while the newer upstarts may be growing fast, they only command a sliver of market share. Nevertheless, it’s unlikely these brands will disappear anytime soon. The beauty of a brand built around a white sneaker is that it will always have a customer.

“Trendier pieces come and go,” said Axel Arigato’s Svardh. “You can always go back to that classic, minimalist sneaker, for the simple reason that it is classic and minimalist. It will never go out of style.”