It’s been a dramatic month for the world’s second-largest fashion company. On Wednesday, still reeling from a PR crisis after a photo on the company’s website of a black child wearing a green hoodie with the slogan “coolest monkey in the jungle” triggered social media outrage (and the trashing of the brand’s stores in South Africa), H&M posted its biggest profit drop in six years.

In the year ending November 2017, operating profit at the Swedish fast fashion giant fell 14 percent to 20.6 billion kroner ($2.6 billion). Soon after the results were released, the company’s stock price plunged to its lowest level in a decade and a number of small shareholders called for the resignation of Karl-Johan Persson, chief executive and grandson of the company’s founder. “We have made mistakes,” admitted Persson on a call with investors, labelling the results “disappointing” and acknowledging strategic errors.

As the digital wave continues to sweep across the fashion industry, other players should see the current plight of H&M as a cautionary tale. The company, once a disruptor, is now in danger of disruption as it faces deep-rooted issues linked to a profound failure to adapt to the digital age. “The fashion industry is changing fast,” said Persson. “At the heart of the transformation is digitalisation and it is driving the need to transform and rethink faster and faster.”

As e-commerce has soared, giving rise to pure play e-tailers like Asos and Boohoo, traffic to H&M’s enormous network of 4,739 physical stores has declined. As a result, this year, the company will close 170 stores. It is also opening 390 new stores. But this means, the company is essentially shuttering 44 stores for every 100 stores it opens, up dramatically from 19 closures per 100 openings in 2017 and an average of 12 closures per 100 openings between 1999 and 2017.

As H&M rebalances its retail strategy, reducing its physical footprint, it also plans to enhance its digital shopping platform and revamp its store formats with new experiences and services. “With online sales growing, the stores need to offer more and more of a great experience, not only as a place for buying garments, maybe offering other things as well, and also packaged in a nicer interior, easier to shop and easier to return and maybe other services as well,” said Persson.

Global store count by brand for 2017

But rationalising — and reimaging — its retail network and investing in e-commerce is only part of the puzzle. There are several additional issues that H&M must also solve.

In a digital world, where trends are increasingly shaped at the speed of Instagram, the company has failed to keep pace with Zara-owned Inditex, as well as Asos and Boohoo, which have built highly responsive, ultra-fast supply chains that deliver fashionable clothing better aligned with customer demand at a clip that’s almost continuous — more like a social media feed than a traditional fashion cycle — driving greater business productivity.

“We’re investing a lot in the supply chain to become even faster, more flexible, more responsive,” said Persson. “We’re looking into our production capacity and production set-up; we’re mapping out and making investment in the whole logistics network to have more optimal garment flow.”

In a move that’s long overdue, H&M is also addressing the problem of how to dispose of its growing glut of unsold inventory. Enter Afound: a new off-price chain that, in a creative twist on a tried-and-tested formula, has been conceived as “style- and deal-hunting paradise” and will carry excess stock from H&M as well as other companies, alongside vintage items. The first Afound outlets will debut in Stockholm and online later this year.

H&M certainly deserves credit for developing new creative concepts. The company has put both imagination and resource into launching compelling new retail brands, like & Other Stories and Arket. But with its core business under pressure, the company must avoid distraction and refocus its attention on its original H&M brand, which makes up the vast majority of its sales, but now fails to excite consumers as it once did.

Undoubtedly, this means sharpening up the label’s product offering with new styles and a better price-to-quality ratio. Because without compelling product, the other elements of the turnaround plan don’t stand a chance.

Leaked government Brexit analysis says the UK will be worse off in every scenario. Leaving the EU will adversely hit almost every UK region, according to leaked analysis that fed the view that the government is badly prepared. The “EU Exit Analysis — Cross Whitehall Briefing,” dated January 2018, suggests almost every sector of Britain's economy would be negatively impacted, with clothing, manufacturing and retail among the hardest hit. Mulberry is among the brands that remain committed to manufacturing in Britain, even as it grapples with higher leather import costs since the Brexit vote.

Amazon's quarterly profit tops $1 billion for first time. The technology giant reported the strongest holiday quarter sales growth in eight years, fuelled by its dominance in e-commerce and a push into new businesses such as advertising. Sales gained 38 percent to $60.5 billion in the fourth quarter. Net income was $1.9 billion, or $3.75 per share. The company is expected to cross $200 billion in sales this year.

Ralph Lauren posts weak holiday-season sales. While topping analysts' estimates for profit, the company reported a same-store sales decline of 6 percent for the last quarter, which included the crucial Holiday season, signalling that a comeback under new chief executive Patrice Louvet may be tougher than expected.

Fyodor Golan receives investment. The London-based womenswear label has sold a “significant minority stake” to Eiesha Bharti Pasricha, an early investor in brands like Roksanda, Zanzan and Flowerbx. The investment will enable the brand to re-launch its e-commerce platform and sell its main collection during pre-seasons. The terms of the deal were  not disclosed. 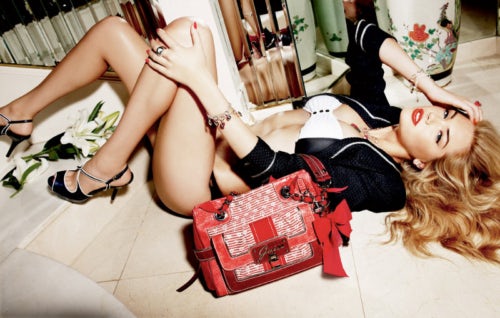 Kate Upton accuses Guess co-founder of harassment. The brand suffered its worst stock decline in more than two months, with shares falling as much as 12 percent, after the model and actress accused co-founder Paul Marciano of sexual harassment, embroiling the fashion brand in the #MeToo movement. Marciano stepped down as chief executive of Guess in 2015, but still has major influence in the company as chairman at chief creative officer. He has denied any misconduct.

Marc Jacobs hires new designer for lower-priced product push. According to multiple sources, Baja East co-founder and creative director John Targon will join the LVMH-owned fashion house in a role that is being touted as "creative director of contemporary," effective February 2. LVMH confirmed Targon’s appointment but declined to share details regarding his specific title or role. The move indicates that lower-priced product is becoming an even bigger priority for the New York-based brand.

Revlon's chief executive steps down. Fabian Garcia is leaving the position after two years at the helm of the cosmetics company. Board member Paul Meister will assume the role of executive vice chairman, overseeing day-to-day operations of the company on an interim basis. In the wake of Garcia's departure, Revlon has appointed Debra Perelman — the daughter of chairman and largest investor Ron Perelman —  as chief operating officer.

Pierre Godé passes away at 73. The long-time adviser to Bernard Arnault, chief executive of LVMH, has died after a long illness. Godé worked alongside Arnault from the mid-1980s to build up LVMH, the world's largest luxury group, which today includes more than 70 fashion houses including Louis Vuitton and Christian Dior.

Influencers linked to social media's black market. The New York Times has published an extensive investigative report on an obscure American company called Devumi that sells Twitter followers and bots, which automatically retweet and follow celebrities, executives, social media “influencers” and anyone else who will pay. The fake followers phenomenon applies to Facebook as well. In November, Facebook disclosed to investors that as many as 60 million accounts — twice as many as previously estimated — are automated bot-generated accounts. This raises questions for the fashion industry, where fake followers could produce revenue for influencers, who make money by selling their posts.

Farfetch inks Middle East deal. The fashion “unicorn” has entered into a joint venture with Chalhoub Group, one of the biggest distributors of fashion and luxury goods in the Middle East, an underserved e-commerce market with high growth potential. Farfetch has raised over $700 million in funding and is seeking scale as it gears up for an initial public offering, which founder and chief executive José Neves has called "the next financial milestone for the business.” Sources close to the deal say the company is planning to IPO in New York in September 2018 at a valuation greater than $5 billion.

Walmart in talks to buy minority stake in India's Flipkart. The US retailer could buy a 15 percent to 20 percent stake in Amazon's main competitor in India, in a deal that could be finalised as early as March, according to reports. It may also involve primary and secondary sales by longstanding Flipkart investors.

Tencent to invest $1.6 billion in Heilan. China's biggest social network firm is leading a deal to invest 10 billion yuan ($1.59 billion) in the Chinese menswear group. The proposed deal, which could be announced as early as Friday, extends a recent push by the Chinese conglomerate into bricks-and-mortar retail, to further compete with Alibaba.