Zaken would slip hundred-dollar bills into Fieg’s shirt pocket at family gatherings, one of many things that made the young Fieg revere him. So, after Fieg’s bar mitzvah, when Zaken gave him a job, the eager teenager jumped at the change to trek from Queens to downtown Manhattan to work.

By 2007, Fieg was 25 and had moved up to head buyer. He began managing David Z’s special make-ups (SMUs) — product collaborations between the store and other brands. That May, he released three different colourways of the Asics Gel-Lyte III sneaker by Japanese athletic equipment company Asics. Each had a run of 252 pairs — one was available in David Z. stores, another on David Z.’s website, and the third was released at a party with youth culture magazine Complex.

When one of the sneaker designs ended up on the cover of The Wall Street Journal, they sold out in a day — and a slew of footwear collaborations followed. He continued to work with Asics, but avoided partnering with hype-inducing streetwear labels, preferring to bring his own brand of je ne sais quoi to unexpected items like Sebago boat shoes and Red Wing boots. “I wanted to work with the underdog brands and revisit their archives,” says Fieg. “I was always interested in bringing out products that brands didn’t feel they could achieve greatness with. Good product is good product.”

In 2010, Fieg left David Z. to launch his own store. He partnered with Sam Ben-Avraham, owner of venerable SoHo clothing boutique Atrium, founder of PROJECT tradeshow, and owner of the Liberty Fairs tradeshow. Together, they invested $500,000 into two locations in Manhattan and Brooklyn. The first Kith stores opened in 2011, located in the back of Ben-Avraham’s Atrium locations. “The build-outs weren’t as extravagant as they are today,” admits Fieg.

The name Kith is derived from “kith and kin,” an archaic Scottish term that loosely translates as “friends and family” and can also mean “to make known.” Kith’s motto is “Just Us,” a sub rosa ethos that describes Fieg’s inner circle, which includes athletes like NFL player Victor Cruz. “I’ve always felt like my friends are my family,” he explains. In fact, in 2012, Kith stores sold a small jewellery line called “Kin,” designed by Fieg’s mother, Batshi. 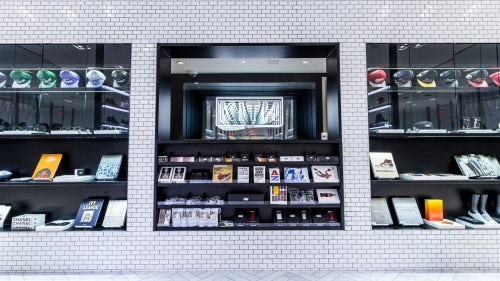 To begin with, Kith carried sneakers from Adidas, Nike and Puma, boots from Clarks, Red Wing, and Timberland, as well as Fieg’s own footwear collaborations, like salmon-coloured Asics Gel-Lyte IIIs and dusty, tropical-hued New Balance 1600s, inspired by childhood trips to Daytona Beach, Florida. Kids camped outside of his stores on release days, hoping to secure one of these limited styles, which often sold out online in minutes.

In 2012, Kith launched an in-house apparel line, which came about when Fieg bought a pair of camouflage cargo pants from Atrium and added zippers and an elastic cuff to the hem. “More people were asking me about my pants than my shoes, so I knew there was something there,” he recalls. The first run of 12 pairs sold out in a weekend. A second run of 24 sold out in a day, and a following run of 100 also sold through. The success of the “Mercer pants” spurred Fieg to hire a product manager and designer to fully establish Kith’s apparel line.

Moving limited-edition sneakers is one thing, but having a consistently strong-selling clothing line is another. Fieg dipped his toe into apparel with a series of small capsule collections that had the same “blink or you’ll miss it” appeal as his footwear. But it wasn’t until last October, when Kith Classics — its basic clothing and accessories label — launched, that Fieg feels the clothing business really took flight. The launch coincided with the re-opening of Kith’s store in SoHo, New York, which had been redesigned by Daniel Arsham and Alex Mustonen of New York-based design collaborative Snarkitecture. At that point, Kith also began carrying apparel from brands like Acronym, Off-White, Don C, and John Elliott + Co.

Since the re-opening, Fieg says Kith’s business has grown 300 percent and revenue is split evenly between footwear and apparel, but declined to provide figures. Beyond Fieg’s own footwear collaborations, Kith’s best-selling items include his frayed hoodies, Bleecker sweatpants, LaGuardia t-shirts, and of course, cuffed-hem Mercer pants.

He attributes the apparel business’s success to a maturing streetwear consumer who is in the market for more than just shoes. According to a 2015 report by WeConnectFashion, the global streetwear market is valued at $75 billion. Athleisure and the popularity of designers like John Elliott and Alexander Wang have normalised sweatpants in the street: while fresh kicks used to be the piece de resistance, now, individuality is defined by how a guy mixes things together.

“The smarter the consumer gets, the more blurred the line gets between what streetwear is, what sportswear is, and what menswear is,” Fieg says. “I’m not a streetwear brand, but when kids on the street wear my brand, that’s a good thing for me — I love that. A big part of our market is having an influence and impact on the kids.”

When Fieg was a kid himself, living in Queens and travelling to Manhattan for work, he remembers trying to bring downtown trends back home to his peers who were slightly behind the curve. But while the Internet has made it easier for consumers to stay up-to-the-minute, and for brands to market their street cred into scalability, it had also increased the threat of overexposure and of losing early customers who trade in the currency of cool.

“It’s very easy to blow this thing out of proportion and give people what they want, but it’s important to keep this brand special,” says Fieg. Kith product does not sell through wholesale and Fieg has scaled back on collaborative projects with other brands. “I’m holding back heavy,” he says. “I see that market’s been saturated.”

Indeed, a company like cult streetwear label Stüssy, which pulled in $50 million in revenue last year is a pitcher of water in the ocean when compared with sportswear giants Adidas and Nike, which sold $7.5 billion and $3.9 billion in apparel in 2014, respectively. But for Fieg, a brand’s real value lies in its credibility. “You can be successful and have less money,” he says. Kith operates only two stores and Fieg says sixty percent of sales are made in-store.

Earlier this week, Kith’s store on Flatbush Avenue in Brooklyn re-opened after a $2 million renovation. The remodelled store — also designed by Snarkitecture — has expanded from 800 to 3,000 square feet of selling space and includes a display of about 750 white cast Air Jordan 2 sneakers suspended in mid-air, referencing the Jordan 1 sneakers that are hanging in Kith’s Manhattan location. There is a VIP room in the back and, surprisingly, a cereal and ice cream bar called Kith Treats, which offers 24 different cereals and 25 different toppings, from crushed Oreos to Lucky Charms marshmallows. 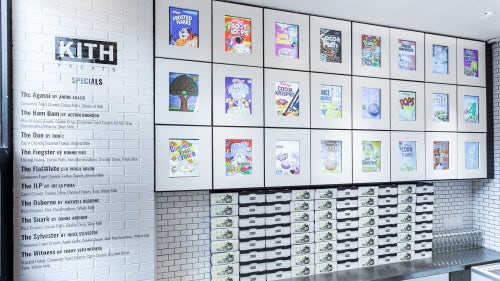 “Some kids can’t afford to buy an article of clothing every other week or every month, so they can leave with a taste,” says Fieg. Indeed, Kith Treats is a move to make Kith a place where its teenage customers can hang out for a few hours, rather than just browse for a few minutes. As kids spend more time online, the shop provides them with a physical experience that can’t be digitally replicated — though it doesn’t hurt that the Snarkitecture-designed interior is eminently photogenic, allowing for plenty of customer-generated promotion across social media platforms like Instagram and Snapchat.

The cereal bar — a partnership with Danny Omari, a childhood friend and a founder of cupcake chain Baked by Melissa — builds upon previous entry-level, impulse-priced Kith items like socks, toothpicks, and chocolate bars. Everything is Kith-branded, from the spoons to the milk bottles, and orders are served in a shoebox-like bowls that double up as a marketing opportunity for brands. The initial Kith Treats box, designed in collaboration with Nike Tennis and Andre Agassi, launches just in time for the US Open, and the boxes will change every six weeks. Other boxes are named after Off-White designer Virgil Abloh, Public School designer and DKNY Creative Director Maxwell Osborne, and Daniel Arsham of Snarkitecture. Each box comes with a proof-of-purchase, and if a customer collects four, they can be redeemed for a Kith x Nike tennis ball.

According to Fieg, a Kith children’s line is in the works and the business will also branch into womenswear — its next store, set to open in New York’s SoHo in December, will be a women’s location.

However, Fieg wants his brand to be defined by its roots, not its commercial success. “As I get older, the product is changing a bit, my tastes are changing, and I feel like the kid who was with me from the beginning is still with me now,” says Fieg. “Every year we’re growing exponentially. I want my guy to feel like he’s growing with me.”