OXFORDSHIRE, United Kingdom — Earlier this year, when Tommy Hilfiger announced its plans to align with the consumer calendar and show fall clothes on the September runway, chief brand officer Avery Baker didn’t quite know how the company, which generated $6.5 billion in retail sales in 2015, would be able to pull it off.

“I worried about this a lot. Were we brave enough as an organization? Did we need to take the jump?” she confided to the audience at VOICES, BoF’s first annual gathering for big thinkers in the fashion industry. But Baker came to the conclusion that the brand would innovate or perish. “We are in this incredible time of transition in the consumer’s behaviour … We felt that the bigger risk was actually to stand still,” she continued. “But we needed a process to make sure that we had the safest, smoothest landing as possible.”

Ultimately, the “see now, buy now” approach was a boon to the Hilfiger business, though it required the company to shift its entire operating model, freeing employees of the company’s traditionally silo-ed organisational structures and working closely with wholesale vendors to shrink production schedules, sometimes down to an unheard-of six weeks, reported Baker.

We are in this incredible time of transition in the consumer’s behaviour.

Despite the challenges of selling clothes straight off the runway, Baker said that the brand’s #TOMMYNOW show at a pier in downtown Manhattan resulted in a 60 percent increase in sell-throughs and a 900 percent jump in website traffic, with 70 percent of inbound hits coming from people who had never previously visited the site. It’s no surprise, then, that the company is sticking with the in-season model and recently announced plans to stage its next consumer-facing runway show in Los Angeles in February 2017. 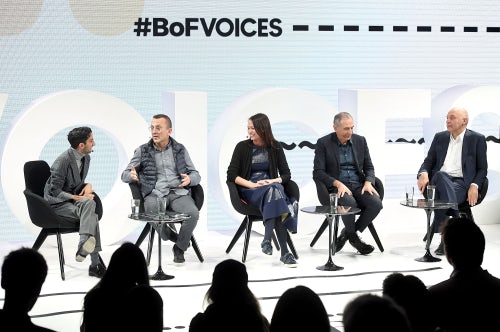 “Social media has blown open fashion weeks. How do we create and keep that interest?” noted Rush, underscoring a key component of the challenge.

“It always comes back to the relationship with the consumer and creating and presenting product in a way that the consumer wants to buy it,” added Kolb, who addressed some of the findings outlined in the CFDA and Boston Consulting Group’s March 2016 study that suggested designers would adopt a wide spectrum of approaches, from “see now, buy now” to forgoing a runway show in favour of salon-style private appointments.

Unsurprisingly, Kolb and Rush were more eager to discuss the contours of “fashion immediacy” while Capasa and Morand took a more sceptical view. Yet, Capasa did embrace the idea of “fluidity,” meaning there would not be a totalising, one-size-fits all solution to fashion week. “We need to preserve this flexibility,” he said.

“It really comes down to who you are trying to reach,” said Kolb, citing Givenchy’s show in New York in 2015, which was open to select members of the public, as well as Hilfiger’s upcoming Los Angeles effort. “There will always be fashion week and there will always be fashion shows. But we’ll see them being less about the unique personality of each city and more a global period of time that shows are happening.”

Maybe the best thing to do is to not all race toward instant gratification.

Morand, though acknowledging the “acceleration” social media has brought to the communication of clothes, cautioned: “We must preserve creativity. Not everything is instant.”

Earlier in the day, British industrial designer Tom Dixon delivered a clever, quippy speech detailing his own experiments in instant gratification. Throughout his career, Dixon has played with the way products are marketed and sold, from a Google-inspired experiment whereby he got a brand advertiser to "sponsor" 1,000 chairs, which he then gave away in London’s Trafalgar square, to partnering with Ikea on a basic bed that could be upgraded with add-ons — some of them crowdsourced — like a marble headboard or a sheepskin cover.

Dixon has also experimented with rapid prototyping and what he called "deconstructed manufacturing" (bringing the factory to the point of purchase) but he has also toyed with the idea of slowing things down. His slow-product project, an underwater furniture factory, used thermo-electricity to create calcium deposits on the metal, which eventually turns into stone over a period of several years. “Maybe the best thing to do is to not all race toward instant gratification, which I’ve been guilty of in the past,” he concluded. “Maybe slow down completely and do things that take three or four or eight years to mature, and sell them in a smaller, more select way.”