LONDON, United Kingdom — Consumer sentiment is at an all-time low. This has hit the fashion industry especially hard due to the discretionary nature of clothing purchases. In Europe and the US, more than 65 percent of consumers expect to decrease their spending on apparel, while only 40 percent expect to decrease total household spending (see Exhibit 2). What’s more, 56 percent of consumers state that their main reason for purchasing clothing during the crisis was special promotions.

Some experts predict that consumer sentiment may never recover to pre-2020 levels as anti-consumerism and economic fallout cast a shadow over global markets, and shoppers are hit hard by a global recession. As of March 2020, 60 percent of consumers in the US already reported that they need to be careful how they spend their money, with more than one-third stating that the pandemic is even impacting their ability to make financial ends meet.

As a result, overfilled warehouses laden with unsold seasonal stock will haunt most players, as long lead times weigh heavily on fashion’s supply chain and global consumer appetite for discretionary purchases wavers. Companies will turn to steep discounting to clear inventory for the rest of the year at a minimum, with a risk that “the contagion of deep discounting could spread as quickly as the disease” throughout the industry, reminiscent of the discounting culture that took hold during the 2008 financial crisis and has dogged the industry ever since.

Some retailers in the US estimate that a majority of spring inventory will be leftover due to store closures and a dip in online traffic, conversions and consumer sentiment. Following the imposition of lockdowns across most of Europe and the US, some brands and retailers have stopped fulfilling e-commerce orders entirely, while many of those who remain up and running have resorted to flash and mid-season sales to increase demand. In Italy, the number of items on discount is up 20 percent year-on-year.

In Europe and the US, more than 65 percent of consumers expect to decrease their spending on apparel.

Seasonless stock like intimates is less exposed and can be repurposed later in the year, but most mass-market players will be left with little alternative to slashing prices, with other inventory-reduction plays, such as controversial stock incineration, no longer feasible in times of heightened transparency and sustainability-conscious consumers.

Even after the dust settles, financial turmoil stemming from the crisis will continue. McKinsey and Oxford Economics analysis shows that, even in the most positive economic recovery scenario, GDP will only return to pre-crisis levels by the end of 2020, or even the beginning of 2021. As consumer spending in most advanced economies accounts for roughly two-thirds of the economy, and about half of that is discretionary spend, fashion companies will be left grappling with price deflation and a sharp drop in demand across the board. Evidence from previous crisis shows that it may take up to two years to fully restore consumer confidence, with early numbers from China showing that apparel sales were still down by 50 to 60 percent in the first month after stores re-opened.

We expect different market categories to be impacted by the discounting wave to varying degrees. Mid-market brands and retailers will be hit hardest, as cash-strapped shoppers trade down to the value segment for essentials and middle-class consumers turn more to heavily discounted affordable luxury and premium goods. 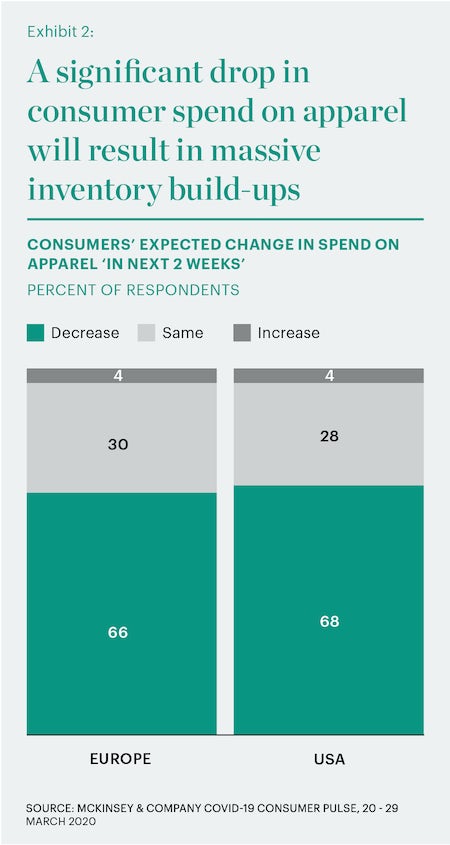 In the luxury segment, we expect consumers to return more quickly to paying full price for quality, timeless goods, as was the case after the 2008-2009 financial crisis. For luxury brands, however, the discounting challenge is exacerbated by the need to preserve reputation and image, making it crucial to avoid steep discounting, or at least discount in a more controlled way through off-price channels. Brands will need to find innovative ways to work with wholesalers and e-tailers — which might even include inventory swaps to prevent them from discounting their products. (Multi-brand retailer Net-a-Porter had 30 percent of its assortment on markdown as of March 2020, compared to only 1 percent in 2019). As boutiques struggle with store closures and overstock problems, and as grey market counterparts in countries such as China cancel orders, marketplace model e-tailers like Farfetch will be well-positioned to facilitate the liquidation of large volumes of cheap stock. This will create tensions with brand-owners, however, as they will want to take a more discreet approach.

Moving forward, the “off-price deception” trend witnessed in The State of Fashion 2018
report — which highlighted the danger of off-price cannibalising full-priced sales — will soon reach a new phase, as growth in the discount sector puts companies at risk of margin erosion. Premium discount retailers with effective merchandising and strong customer service, like The Outnet and Yoox online and McArthurGlen offline, will become mainstream by offering discreet and large-scale avenues for excess stock disposal. As in 2008, new digital players will also emerge to seize the opportunity to dispose of excess stock. But caution is advised: for companies engaging with a growing cohort of anti-consumerist shoppers, significant discounting and traffic driving could be construed as tone deaf.

The pandemic will bring values around sustainability into sharp focus, intensifying discussions and further polarising views around materialism, over-consumption and irresponsible business practices. Retailers have already come under fire for keeping stores open and putting retail workers in danger during outbreaks in the US, where many lack healthcare benefits. Meanwhile, some players who stopped paying rent to stay liquid have faced public backlash and have consequently reversed their actions to regain customer trust, while public outcry about unpaid order cancellations of finished garments in production has forced some global players to revise their actions. The focus on sustainability will be especially prominent for Gen-Z and Millennial shoppers, whose concerns for the environment were already heightened pre-crisis. As we stated in The State of Fashion 2019 report trend “Getting Woke,” consumers will make or break brands based on trust — a trend that is now further intensified.

“The virus, I think, can be seen as a representation of our conscience... it brings to light what is so terribly wrong with society and every day that becomes more clear,” said Trend Forecaster Li Edelkoort. “It teaches us to slow down and to change our ways.”

In the luxury segment, we expect consumers to return more quickly to paying full price for quality.

This may signal the end of “extreme consumerism” for some consumers who reject the idea of buying goods in large volumes. According to a McKinsey survey, 15 percent of consumers in the US and Europe expect to buy more ecologically and socially sustainable clothing. Brands that are able to reorient their missions and business models in more sustainable ways will be able to cater to a more captive audience than ever before.

Fashion players may also turn to more innovative ways to reduce stock and reinfuse value into their products, such as accelerating nascent sustainability trends. For many players, repurposing existing stock for new seasons will be a more viable option than recycling or upcycling with fabric additions or extractions. Other opportunities include personalisation, customer experience and a re-evaluation of the company’s fashion calendar, such as moving monthly drops into later seasons.

To improve their long-term outlook, brands will need to tailor future discounting strategies by aligning promotions to their various channels and putting in place a revised product calendar to reflect fashion’s “new normal.” They will also need to reinfuse value to make it worthwhile for consumers to shop at full price. The solution is not just about reducing overstock but gaining back the trust and enthusiasm of cash-strapped consumers — and that cannot be achieved by discounting alone.