LONDON, United Kingdom — Topshop Unique is no longer. Say goodbye to the likes of the £995 ($1,333) shearling jackets that the British high street brand used to show on the runway at London Fashion Week. The company’s latest fashion show, which took place on Sunday, was re-branded Topshop London Fashion Week and the prices of the product that appeared on the catwalk were much lower than before. There were bouclé bralets from as little as £39 (about $52), £110 ruched leather mini skirts, and faux-fur coats for £350, with an average selling price of just £80, versus £190 for the now defunct Topshop Unique line.

While the prices have gone down, Sir Philip Green — chairman of Arcadia Group, which owns Topshop — is relying on big-name attendees like Kate Moss, alongside a roster of It-girl models like Adwoa Aboah and Jourdan Dunn in faux fur coats, party dresses and T-shirts with the models’ names emblazoned on their chests, to retain the label’s fashion credentials. Green, speaking backstage alongside outgoing creative director Kate Phelan, said the show, inspired by the streets of Soho, was about “keeping our brand in the forefront.” He added: “I liked the product, I thought it was bang on our customer.” 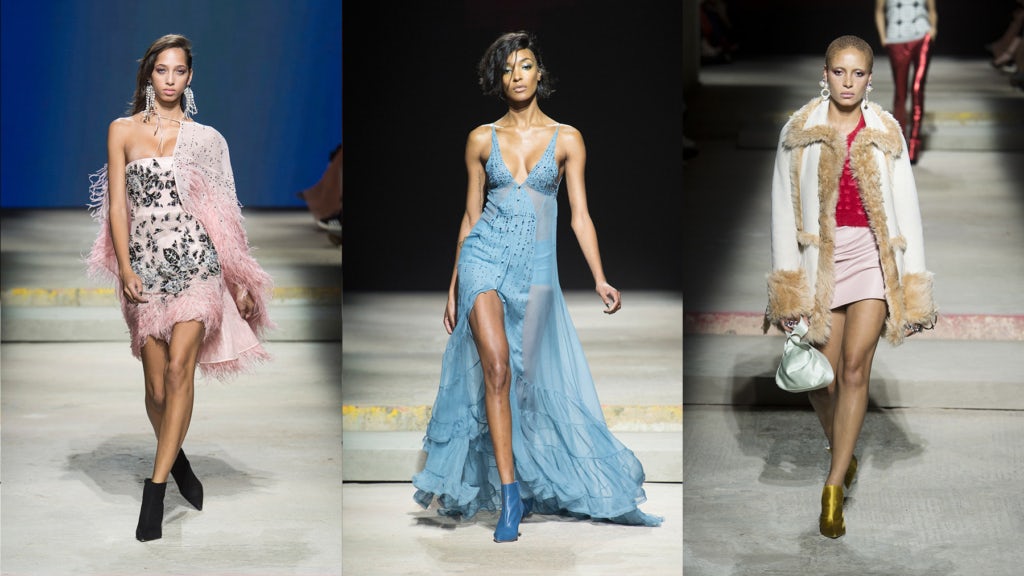 The radical shift is just one part of Topshop’s attempts to stay relevant in the face of poor performance as shoppers turn to competitors like Asos, Boohoo and H&M in a marketplace increasingly driven by speed, price and digital.

Topshop was long a fashionable go-to. Its clothes were regularly styled with luxury brands like Prada and Burberry in the pages of glossy magazines, a high-low mix that was acceptable to both parties, insiders say. But the label’s fashion cred — once buoyed by fans like television presenter and ex-model Alexa Chung and the kudos of being the only British high-street chain to show at London Fashion Week for over a decade — is under threat.

This is not the end of Topshop, Topshop is still a good business. It’s just not as good as it was.

Topshop began as part of the Peter Robinson department store in the north of England in 1964 and became a standalone outlet in London in 1970. The label struggled through the 1980s, but managed to regain its standing and soon became known for its fashion-forward catwalk shows and high-profile collaborations with the likes of Kate Moss, which prompted huge queues of screaming fans and steady sales growth.

Jane Shepherdson, who ran the business from 1999 to 2006, says that her aim as brand manager was to “become the world fashion authority. At the time the catwalk and high street were polls apart.” To unite the two, she hired ambitious, young designers; sponsored the British Fashion Council’s NewGen programme, a talent identification scheme that has worked with designers like Christopher Kane, Jonathan Saunders and Erdem; used top creative talent like art director Ronnie Cooke Newhouse and photographer Tyrone Le Bon; and had cool girls like Lily Cole walk in its show. “We wanted to back it as a fantasy place, a dream place for girls who absolutely loved fashion and I think it was the right thing at the right time,” says Shepherdson.

So where did things go wrong?

“Topshop is attracting slightly older customers, aged 25 to 34, as well as young people, so their customer base has grown,” says Tamara Sender, senior fashion analyst at Mintel. As a result, the label’s design has “become less edgy and its lost sight of the demand of its young, fashion-forward shoppers,” she adds. Mintel research suggests Topshop, while still seen as a “fun brand”, is also thought of as being “expensive” and “overrated”. A few years ago this wasn’t the case. “It was associated with being innovative, trendy and cool.”

The shift appears to be linked, in part, to Topshop’s push into America. As part of a US expansion strategy that followed a £350 million investment by Leonard Green & Partners, Topshop now has 10 stores and 76 Nordstrom concessions in America, according to the company website. Richard Hyman, a retail industry veteran and consultant, says the offer has definitely been “dumbed down a bit” to reach a wider and more diverse market in the US. The Nordstrom shopper is “older, less fashionable and has a less urban lifestyle. And in order for Topshop to hit the spot with enough of those customers to be successful, it has to have more muted fashion,” he says. That’s a difficult path to take when you’re competing with the likes of H&M, Zara, Asos and Boohoo, which all offer more fashionable items at lower prices.

Topshop has also suffered at the hands of innovative competitors like Zara, whose supply chain is lighting fast and highly responsive to consumer demand, and Asos, which has mastered global e-commmerce. “When you look over the last six years, Boohoo more or less didn’t exist, Asos was tiny, H&M and Zara in the UK were much, much smaller, and if you add up the market share of all those companies, it’s quite a material figure,” says Hyman.

“In a market that hasn’t really grown much — if at all — over that period, something has to give, somebody has to drop out and some people have to experience market share attrition,” he continues. “This is not the end of Topshop, Topshop is still a good business. It’s just not as good as it was.”

Topshop has also been slow to expand internationally, where it has fewer stores than its competitors and has faced challenges. While the UK is Topshop’s largest market with over 300 retail stores and concessions, the brand has used joint ventures and franchise partnerships to expand in Hong Kong (with Lane Crawford) and Canada (with Hudson’s Bay). It also recently bought back the brand from administration in Australia, where it kept just four stores. The New Zealand franchise has since been placed into receivership.

The brand has over 420 stores and franchises in another 42 countries — but this is minuscule when compared to the retail footprint of Zara (more than 2,200 stores in 94 countries) and H&M (more than 4,500 stores in 68 countries).

In China in particular — the region set to become the world’s largest retail market next year, according to PwC — the brand has been decidedly slow. It currently sells through one of the larger local e-commerce players, Shangpin.com, and has agreed a deal to open five stores on the mainland.

In the face of these challenges, Green has begun a management overhaul. In July, he snapped up Burberry chief merchandising officer Paul Price to be chief executive following the departure of Mary Homer to the White Company. Price only started as chief executive on September 4. Also in July Baroness Karren Brady, the boss of West Ham football club, was made chairman of Arcadia Group. A month later, the brand announced that Kate Phelan, the creative director of Topshop, and Gordon Richardson, creative director for Topman, were leaving the company.

Topshop is going to have to come up with something different to tempt people enough to think it’s exciting again.

In their place, David Hagglund, who ran a creative agency in Sweden with clients including H&M and Hugo Boss, is taking up the newly created position of creative director across both brands. He, too, joined on September 4.

The Sunday Times reported earlier this year that global consulting firm McKinsey has also been drafted in by Green to review strategy at Topshop. Cutting prices of the London Fashion Week collection may well be the start of a renewed vision to target a younger shopper.

Price may well look to the golden age of Topshop. “It still does a great job, but you have to keep reinventing yourself to stay relevant, you either incrementally continue to move forward doing different things all the time or you take a great leap,” says Shepherdson.

“Look at H&M, they created Cos, Arket; they are constantly bringing something new, and if they don’t work, they don’t work, but you have to keep moving forward,” she continues. “Topshop is going to have to come up with something different to tempt people enough to think it’s exciting again.”