LONDON, United Kingdom — In the latest edition of the Lyst Index, Balenciaga has maintained its lead over Gucci as the hottest brand in fashion for the third quarter in a row. However, it is the continued strength of third-place Vetements that may be of most interest to industry insiders, following a report from influential streetwear site Highsnobiety in March titled: “Two Years After They Broke the Internet, It Looks Like Nobody is Buying Vetements.”

Indeed, by the end of last year, reports of flattening consumer interest in the label intensified, as buyers whispered that some consumers were shifting their spend from Demna Gvasalia’s Vetements to Gvasalia-designed Balenciaga products, which came not only with a similar aesthetic, but also with a major brand name and a lower price tag. The rumours reached a crescendo in March when the Highsnobiety article, citing an anonymous independent North American retailer, maintained: “From a retail standpoint, Vetements is completely dead.”

In a Trumpian twist, Guram Gvasalia, Demna’s brother and chief executive of Vetements, declared the piece “fake news” and nothing more than clickbait. “Vetements is in the strongest creative and financial state it has ever been,” he said in a statement, underscoring that the brand was outperforming targets with 50 percent growth year-on-year. Demna Gvasalia added via Instagram: “Fashion is not about hype, nor about useless gossip or opportunistic pseudo journalism, fashion is about clothes. So is Vetements.” But Highsnobiety stood by its reporting, clarifying that “in the eyes of the very select market we cater to, Vetements is over.” 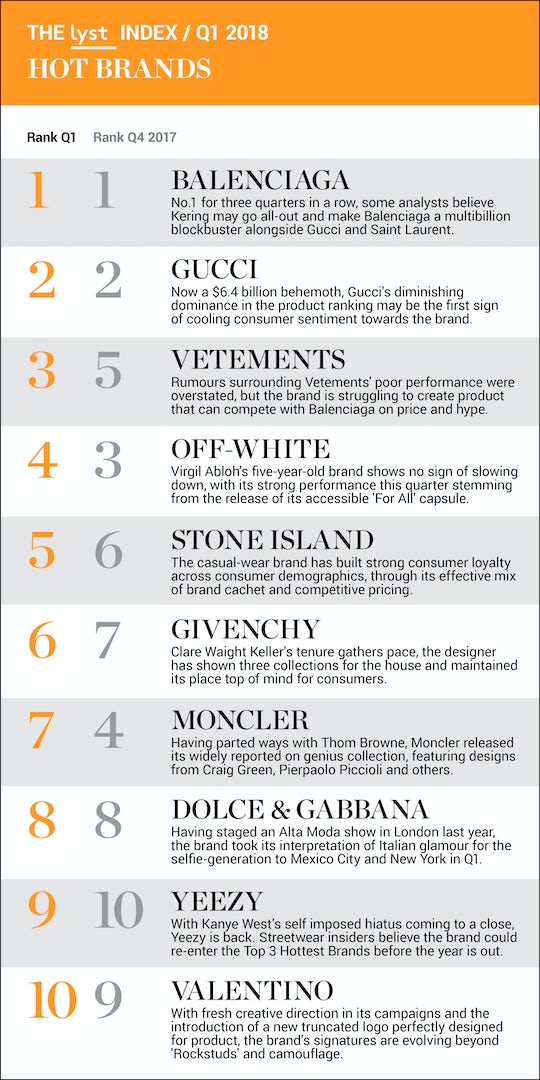 While the sentiment and purchasing patterns of this “very select market” may well tell another story, according to the data collected by Lyst and analysed by The Business of Fashion, general interest in Vetements is still rising. Total search traffic to Vetements-related pages grew by 31 percent comparing Q1 2017 and Q1 2018 data provided by Lyst.

A significant spike came at the end of January, when Vetements released its Fall/Winter 2019 edition of its Vetements x Reebok sock runner. Priced at $510, or $610 for the high-top iteration, the boots are more accessible than the brand’s $1200 hoodies. But even excluding the search queries sparked by the Reebok collaboration, searches for Vetements grew by 12 percent comparing Q1 2017 and Q1 2018 data provided by Lyst.

And yet, searches for Balenciaga are certainly growing at a much faster rate than Vetements. The impact of Balenciaga dropping new sneaker colourways and holding runway shows in March 2017 and September 2017 is clear in the graph below. Likewise, Vetements’ decision to replace its Spring/Summer 2018 show with a lookbook surely impacted search queries for the brand. Vetements has grown by 1 percent on an average weekly basis over the last two years and that rate has remained largely consistent even after search enquiries into Balenciaga had doubled. But there’s little doubt that Balenciaga is racing ahead of Vetements in terms of consumer interest.

Of course, the comparative scale and financial backing — and therefore, marketing budgets — of each brand also play a significant factor in their growth rates. Back in June 2017, after cancelling his Spring/Summer show, Demna Gvasalia told Vogue, “We will do something when there’s the time and the need for it. It will be more like a surprise. It’s like we’re putting Vetements into an artificial coma. In five years, it has gone so fast; it started to become something else. I want to bring it back to where we started. No more oversize hoodies…!” 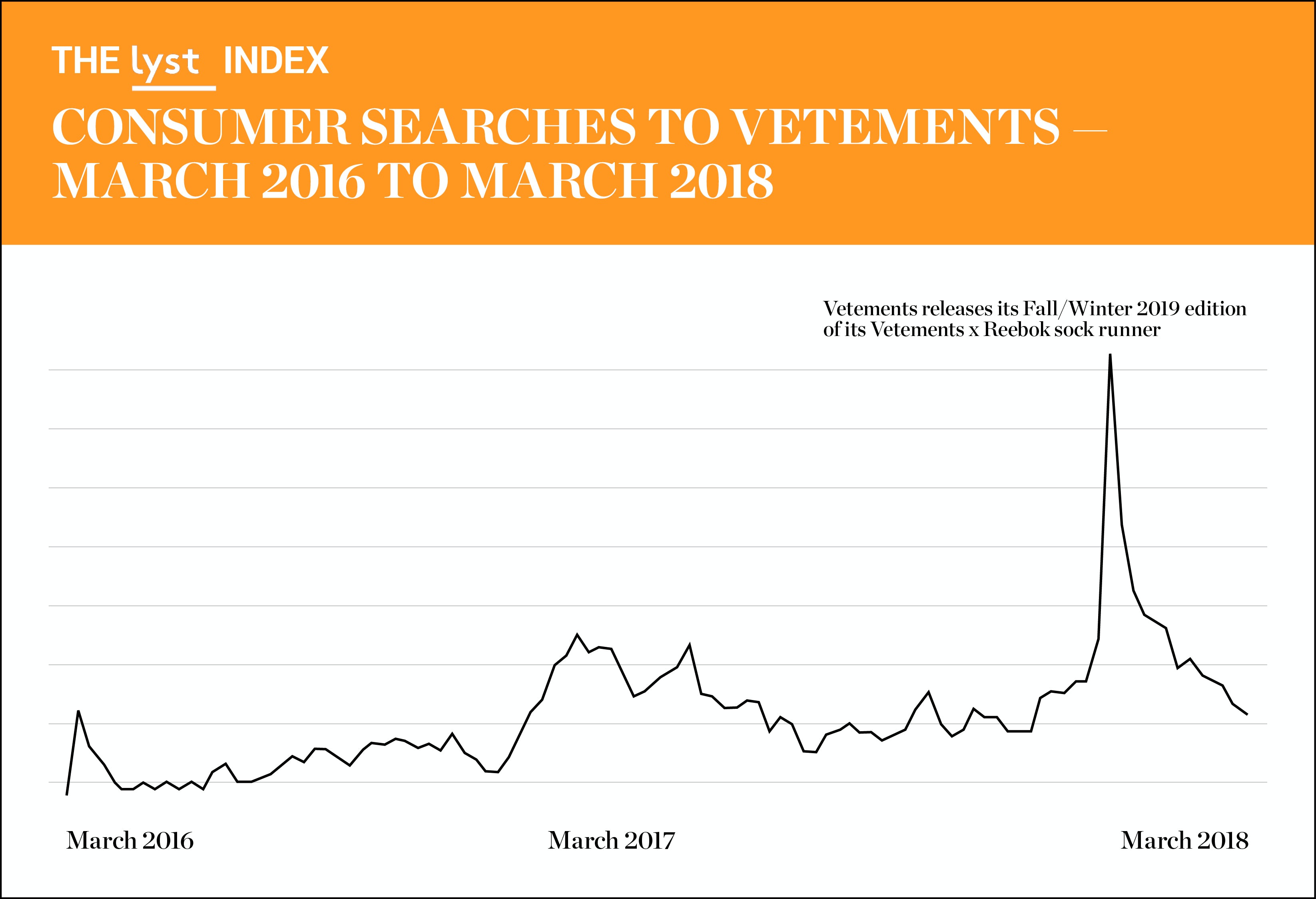 But in terms of consumer search, that surprise is yet to materialise. Excluding seasonality, Vetements’ only significant search spike in the past 12 months relates to a product drop, not a communication strategy. The brand has staged some widely reported PR moments, from a travelling installation of clothing to raise awareness on overproduction, drawing crowds in LA, London and other cities, to its self-aware authentic-fake pop-up sales in Hong Kong and Seoul. However its tactics have failed to match Balenciaga’s ability to make headlines. Take the success of its Triple S sneakers in driving industry and streetwear coverage, its March ready-to-wear show which featured World Food Programme iconography and a widely discussed simultaneous €250,000 donation, and some much-memed layered outerwear looks.

With regards to whether Balenciaga’s increasing popularity comes at a clear cost to Vetements sales results — a view supported by some industry insiders, including a source cited by Highsnobiety who claims that Demna Gvasalia saves his best creative ideas for Balenciaga — Vetements still achieved a 22 percent year on year growth in click-through to retail sites, an indication of purchase intent, comparing data tracked by Lyst in Q1 2017 and Q1 2018.

Over that same time period, however, Balenciaga click-through grew by 103 percent, with 220 percent more “in stock” products featured across Lyst than Vetements. The Parisian maison benefits from a more accessible price point — some of its hoodies and its speed boot trainers retail at below $500. But despite this, Balenciaga’s average basket price was $116 higher than that of Vetements, according to data from Lyst. What’s more, when you remove the uptick in sales resulting from the Reebok collaboration drop, Vetements’ performance drops sharply to only 9 percent growth over the same period. 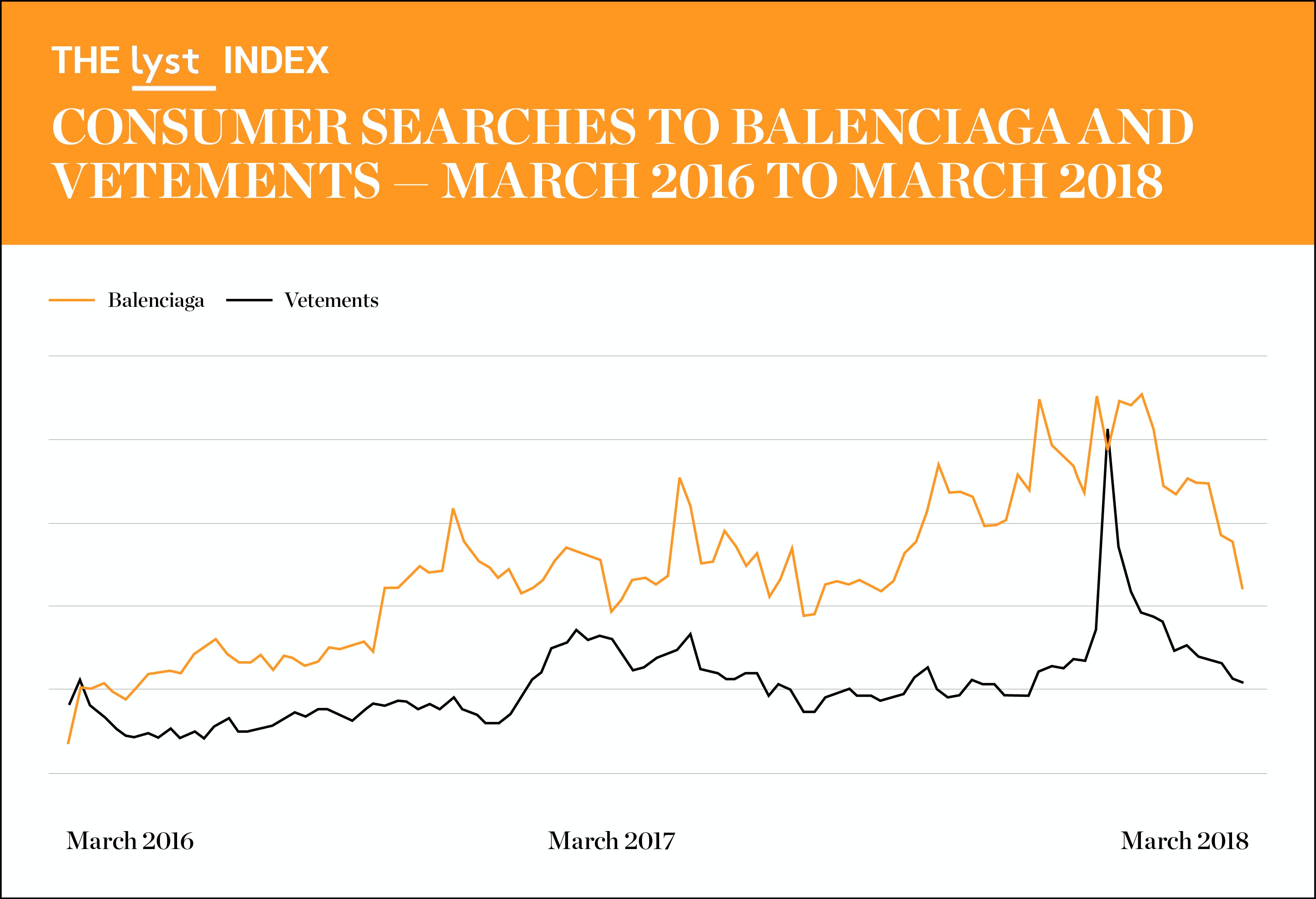 In the past Vetements was boosted by its collaborations. For its Spring/Summer 2017 runway collection, the brand collaborated with 17 brands, from Brioni and Manolo Blahnik to Levi’s and Comme des Garçons, generating widespread brand awareness. But having shared its brand of cool in order to benefit from its collaborators’ technical abilities and specialist production facilities, Vetements products now sit next to their collaborators’ original versions online, but are priced dramatically higher, sometimes by as much as $1,000, calling into question how distinct Vetements’ designs are from the originals.

Vetements’ lack of product innovation may also be part of the problem at a time when consumers are increasingly looking for novelty and newness. Its reissues and iterative design development, once taken as statements in themselves, could certainly explain the reported drop in street style coverage. 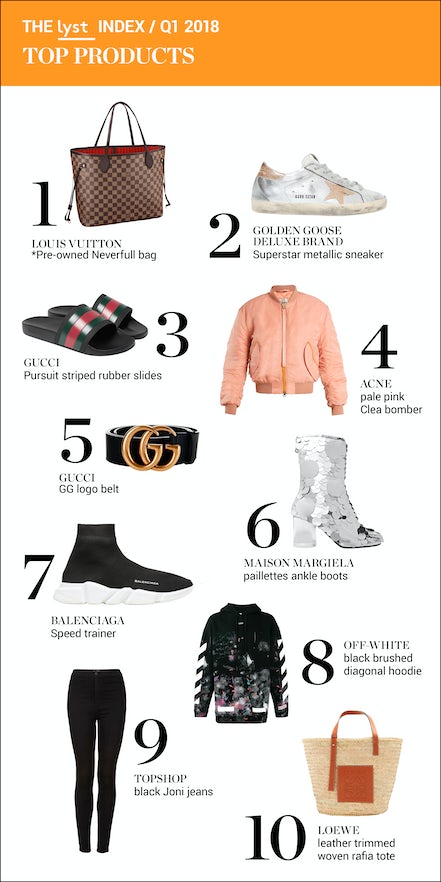 Virgil Abloh, who is now now charged with leading the creative team of Parisian maison Louis Vuitton, while designing for his own streetwear label, continues to ride high. Off-White maintained a place in the top 5 hottest brands, having jumped from 31st to 3rd in Q4. The biggest driver of consumer interest in Off-White across Q1 was the January 8, 2018 launch of the “For All” collection. Consisting of more affordable pieces, the capsule created a 78 percent week on week increase in searches to the brand, compared with the previous seven days.

The label also entered the Lyst product ranking for the first time with its black brushed diagonal hoodie, starting at £405. Abloh’s appointment at Louis Vuitton, which was announced on March 26, prompted a 10 percent increase in searches for Off-White on the day of the announcement, compared to the previous day.

Another brand of note in Q1 was Prada. Though it narrowly missed out on entering the top 10 hottest brand rankings by just one place, the brand’s performance was impressive — climbing 14 places to rank 11th. Mrs Prada’s return to her nylon roots has proved popular with consumers. The best-selling pieces for the brand are its nylon belt bags, gabardine track pants, Tessuto bucket bags and bucket hats, as well as Match Race, Tech-fly and Cloud Burst sneakers. Searches for the brand made on Lyst grew by 40 percent quarter over quarter.

Prada does not, however, feature in the top 10 products ranking, which is once again dominated by footwear, with four out of 10 products coming from the category in Q1. Gucci slides returned to the top 10 ranking, after last quarter’s hiatus. They are the most consistently ranked product over the last 12 months. However, Gucci’s vice-like grip on the product ranking is slipping, with only two of the 10 products in the ranking (the brand was responsible for 4 of the top 5 products sold last year). Could this be the first signs of a cooling of the blockbuster Gucci phenomenon? Additionally, Topshop enters the product ranking for the first time and is the first high-street brand ever to do so. Can it maintain its momentum? Check in next quarter for our next installation of the Lyst Index.

BoF partnered with Lyst, the global fashion search platform, to analyse the behaviour of over 70 million annual consumers, shopping across the world’s largest inventory of luxury and contemporary fashion. The rankings were formulated using Google and Lyst search data, engagement statistics, conversion rates and sales. Due to exclusive vertical distribution models, the Lyst Index does not include: Chanel, Christian Dior, Hermès, Louis Vuitton and Céline, with the exception of pre-owned items available on the search platform.