The Year Ahead: Neighbourhood Stores Return

Consumer demand for convenience and immediacy is prompting retailers to complement existing brick-and-mortar networks with smaller format stores that meet customers where they are and reduce friction in the customer journey.

LONDON, United Kingdom — Today’s consumers are used to getting what they want — when and where they want it. Convenience is key, and in terms of shopping that often means local in tandem with online shopping. Given that many people still like to touch, feel and try fashion items before they buy, the industry is well placed to benefit from this theme. We expect fashion retailers to ramp up their presence in neighbourhoods and new districts beyond traditional commercial zones, with stores that reflect the local community and focus on service and experience.

Consumers have become accustomed to immediate gratification and convenience and, superficially, online shopping fulfils that need. The wider context, however, is more complex. While e-commerce has raised customer expectations, only a third of consumers think shopping online is more convenient than going to a physical store and, according to an international study by Facebook, 85 percent of consumers cited convenience as the main reason to shop locally. In the fashion category, more than 70 percent of purchases are still made offline and online channels account for just 13 percent of luxury brand sales. What this demonstrates is that physical stores do matter but they need to be convenient and meaningful for customers.

Broader consumer trends contribute to the growing desire to shop locally too. The decline in car ownership among younger urbanites means these consumers want and need more amenities on their doorstep. In food shopping, for example, consumers are swapping the weekly grocery shop for a series of small trips to local stores — in the UK these smaller trips now account for more than half of all baskets.

In the fashion category, more than 70 percent of purchases are still made offline.

Local shops also make returns much easier for consumers and from a retailer’s perspective, the return rate for apparel is much lower for clothes bought in store than for those bought online (16 percent versus 25 percent respectively).

Consumer preference for local shopping is leading retailers to rethink their store network and to open in areas outside the traditional commercial centres. These may be more residential, but some are in smaller trendy commercial districts that are attracting start-ups and cultural institutions, and some may be in mixed-use retail complexes or even satellite cities.

Examples already abound internationally. In the US, Nordstrom Local holds no inventory but provides styling services, fittings, alterations, as well as in-store pick up and return of both Nordstrom goods and those of rival retailers. Localisation is critical. According to Jamie Nordstrom, president of stores, “We want to drive engagement. The way you do that on the Upper East Side [of New York City] is different from the way you do that on Melrose in LA or downtown in [New York City’s] West Village.”

In the UK, Anthropologie has announced plans to open stores in “neighbourhood” locations, with plans to more than double its number of stores by next year. These new stores are often considerably smaller than existing stores and each has its own look and feel based on its location. Peter Ruis, managing director of international, Anthropologie, told Drapers that “the idea that people travel into the city… to shop has disappeared because they can do that online. Shopping has become much more local.”

The idea that people travel into the city… to shop has disappeared because they can do that online.

“Shopping local” has been gaining ground in emerging and frontier markets too. Pakistani fashion and lifestyle brand Khaadi has traditionally sold both ready-to-wear and unstitched fabrics in its large-scale stores. Recently, it opened specific fabric concept stores, catering to customers who want to create their own bespoke clothing. The new format stores are opening in areas outside the large shopping neighbourhoods in mid-sized cities, and enable Khaadi to compete directly with small, informal cloth shops.

Mixed-use developments are increasingly popular in many parts of the world.

In mall-friendly Dubai, Meraas has launched several projects that seek to create new “urban destinations,” combining residential units with retail, leisure and food. For example, right next to villas in the city’s Al Wasl area is the developer’s low-rise City Walk complex with boutiques at street level rather than enclosed in a mall.

In Bangkok, mixed-use developments are an increasingly popular solution to escalating land prices, with large-scale new projects including One Bangkok and The Icon Siam, to name a few. Retailers taking space in these properties benefit from the steady footfall of both the buildings’ residents and their office workers.

Sometimes, going “local” means moving outside of downtown shopping districts as they become congested. And in multi-nodal Asian mega-cities that are more decentralised than those in Europe and the US, “it’s not [one] strong core and then suburban areas,” says Albert Chan, director of development, planning and design for real estate developer Shui On Land, which is working on the Ruihong Tiandi development in Shanghai’s regenerated northern district of Hongkou. “The people who live in a community [now] tend to live, work and play in that community.”

Malls are still very popular in these new areas — for example, in Shanghai’s Minhang District, the city’s second largest, 29 new malls opened in 2016 alone. These malls attract both domestic retailers and major international brands such as Nike, Sephora, Uniqlo and Calvin Klein who recognise that some of their customers no longer spend much time in the traditional central business district of a megacity like Shanghai. 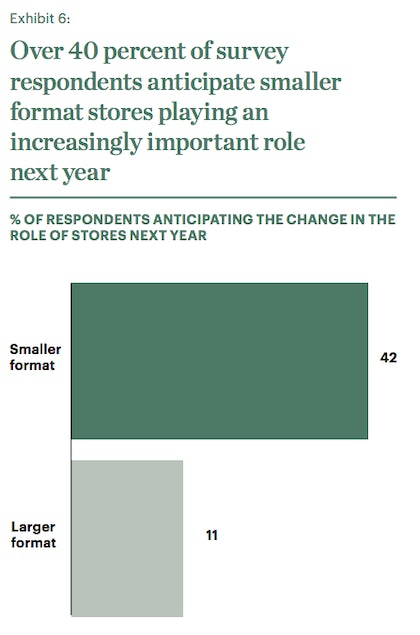 Whatever the context of these new stores, simply replicating existing standard store formats is unlikely to excite increasingly demanding consumers. The more community-focused the store, the more ambitious it needs to be, in many cases delivering experiences more akin to flagship stores but at the micro level.

Dr. Martens has established an experimental store in a nineteenth-century building in the heart of London’s Camden Market. In addition to its full range of products, the store also offers exclusive limited-edition designs, features artwork commissioned by The Specials bass player Horace Panter, and a space for customers to personalise their Dr. Martens shoes (whether old or new).

American fashion designer Eileen Fisher chose to launch a hybrid retail store concept in Brooklyn as a nod to the unique character of the New York City borough. “Making Space” focuses on innovations, ideas and experiments, and has space dedicated to community engagement with workshops, movie screenings, gallery shows and neighbourhood events. Every fortnight a different artist-in-residence is featured, and the store also offers a mindfulness programme.

Some digitally native brands also find local neighbourhoods more appealing for their flagship stores. In the US, players such as Reformation, Everlane and Warby Parker have seen the value of being where customers live and offer a physical showroom rather than a full range of products. Absolute footfall is less important for these retailers as the bulk of their sales remain online.

Customers’ growing desire for convenience and to shop close to home means that in 2020, we expect moving into the neighbourhood to be a core pillar of fashion retailers’ omnichannel strategy. This means using a wide range of local store formats that complement both flagship locations and digital channels, and that can serve customers where they live both for sales and returns.

These smaller, more decentralised stores will focus on personalised service and use design, highly focused assortments and experiential elements to be locally relevant. Some may be pop-ups, some might be in new corners of established neighbourhoods, but all will seek to boost brand awareness and loyalty and will need to rely on highly efficient inventory management. Retailers will further explore the potential of artificial intelligence and machine learning to create tailored assortments for their local consumers.

In countries where urbanisation is still a prevailing demographic trend, fashion retailers are likely to take the opportunity to move into new retail space in smaller satellite cities and mixed-use residential complexes in the mega-city. Whatever the store format or brand aesthetic, the winning formula will be focused on maximising the use of these new spaces both for servicing and acquiring customers.