NEW YORK, United States — Theory’s flagship store in Manhattan’s meatpacking district has long served as a sort of retail petri dish. Just a door away from the brand’s corporate headquarters, it offers an opportunity for designers, merchandisers and production managers alike to keep an eye on what’s actually happening at the store level. But on a muggy Thursday afternoon in mid-July, there’s more to observe than foot traffic. In the middle of the store near the tills stand three racks, discreetly labelled “Theory 2.0.” Three young women, one gripping a Starbucks coffee cup, preside over these racks as if they are their own.

That’s because they sort of are.

Eighteen months ago, Theory founder and chief executive Andrew Rosen walked into the company’s offices with an idea. The label, which played a leading role in establishing the contemporary market in the late 1990s, was set to turn 20 in 2017. But Rosen wasn’t interested in celebrating the past.

“I didn’t want to look back and talk about Theory’s 20 years,” he says. “I wanted to look forward and decide how the company could live for another 20 years.”

Right now, there are few clear solutions to fashion’s laundry list of problems. Endless choice and easy access to information has made it far more difficult to engage and retain customers. Department stores, one-stop-shops once frequented for their convenience, can’t compete with the internet. Fast fashion continues to deliver trends on the cheap, making it more difficult for middle- and high-end brands to justify their prices and thus contributing to a desperate cycle of discounting. Selling directly to the consumer offers higher margins, but acquiring customers — either through digital marketing or physical stores — is expensive.

I want Theory to survive — and be relevant — for the next 20 years and beyond.

As a result, many companies, from specialty retailers to department stores to venture-backed startups, are unsure of their futures. Theory, which is owned by Japanese retail conglomerate Fast Retailing, benefits from high margins, a diverse distribution network, and the fact that there are still very few options when it comes to high-quality, reasonably priced workwear. But that certainly doesn’t mean that the line, long recognised for its minimalist, refined aesthetic, is immune to fashion’s illness. While market sources indicate that Theory generated close to $1 billion in revenue in 2016, the company declined to share growth figures.

One thing is for certain: Rosen isn’t going down without a fight.

Enter Theory 2.0, an initiative driven by 28 rising stars, 23 of whom are women, from across the company — merchandising, design, planning, retail, manufacturing production, etcetera — who have been tasked with building its future. A capsule collection, the first visual proof of their efforts will debut on Tuesday, July 18, in six Theory stores and online in US, four stores in Japan, four in China, four in Korea and two in Europe. 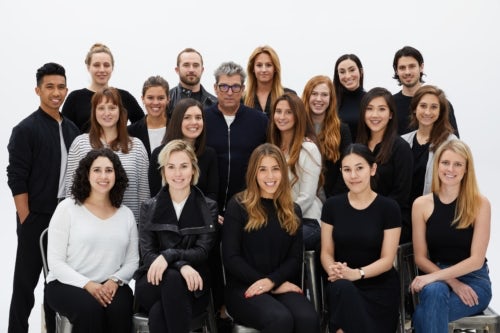 In essence, these individuals, mostly women in their 20s and 30s, are operating as a startup within the greater company. For now, like many early-stage entrepreneurs, they still have day jobs that pay their salaries. But if Theory 2.0 moves the needle, that could soon change.

When the SWAT team first formed, Rosen and other senior-level management treated it like a focus group. “I asked them what was important to them. What kind of things did they want to see the company doing?” he explains. “I gave them that voice.”

As an “intrapreneurial” startup within a larger organisation, Theory 2.0 benefited from the resources made available by parent company Fast Retailing, including instant retail distribution, mentorship from senior leadership officials and a budget for things like marketing and in-store events. However, no guarantees were made. “I told them, ‘You’re going to start a company. You have to name it, you have to figure out manufacturing and distribution, fit and quality and branding,’” Rosen explains. “I want our company and our people to take responsibility for making it sustainable. Not only in theory, but in fact.”

The group whittled down their ideas to four major areas of focus: sustainability, philanthropy, female leadership and entrepreneurship and, of course, product — some with more tangible results than others. In four of the brand’s stores, consumers have been introduced to Theory for Good, a sell-back programme that offers store credit to customers who bring back used Theory pieces. Those items are then refurbished and sent to Year Up, a not-for-profit organisation with a mission to help young adults go “from poverty to professional careers in a single year.”

Today, though, the team is excited about the Theory 2.0 capsule collection, a 32-style line of modern essentials priced with a young professional in mind. A cropped t-shirt, for instance, costs $55, while double-faced wool coat rings in at just under $500. A single-button crepe blazer — a wardrobe signature — is $325. The idea was to approach the new range “as if Theory was starting all over again today,” Rosen says.

While it “still has the Theory DNA,” what changed are the details: fabrics are machine washable and easy to care for. They’re also, in many cases, made in a socially conscious manner. For instance, the team chose to use high-quality vegan leather and suede, not only keep prices down, but to address the personal values of many young customers.

There are new ways that customers are shopping. It’s not that they’re buying less, they’re just buying different.

“There’s definitely integrity behind it,” says seven-year Theory veteran Sam Schaflin, who worked as a district retail manager before moving into the corporate buying and merchandising in 2015. “People care more about what their company is doing beyond their mission more than ever. When I used to interview store employee candidates, anyone under the age of 25 would ask about the sustainability program.”

Many styles — ribbed-knit sweaters, a single-button blazer — will be re-issued each drop, simply rendered in different fabrics and colours, as new styles are added.

As for when the pieces will hit stores? Right now, the cadence is slated to be every couple of months. “Hopefully we’ll accelerate that a little bit,” Rosen says. “I want to create some sense of urgency around it. I am very much into the idea of having clothing that stays at one price for a long period of time.”

That doesn’t mean declaring sales forbidden altogether, but for now Theory 2.0 will not operate on the traditional markdown cycle.

“It’s nice for the customer to know that, when they come in today, or two weeks from today, or a few months from today, the clothing is the same price,” he adds. “Our accessories never go on sale, even if we have promotions in our stores, and we’re developing more and more product that has integrity of pricing. My attitude is that we need to be a little more aggressively priced to begin with.”

The collection, for now, will also be sold entirely direct, although Rosen is open to bringing on a third-party partner. While direct retail was shortly heralded as a magic solution to fashion’s woes — direct-to-consumer brands benefit from high margins, greater control over inventory and discounting, as well as deeper consumer engagement — most brands are finding that wholesale distribution with the right partner remains beneficial.

“A lot of people say, ‘Well the customer just isn’t shopping.’ I'm not a numerical guy in this way but I'm sure the world is selling more clothes today than they sold yesterday or three years ago,” says Rosen, whose global business has transitioned from being majority wholesale to majority direct over the past five years. (Wholesale is still a larger business domestically, although direct sales are the largest driver of growth.) “The old distribution channels and models have just been changed and disrupted and there are new ways that customers are shopping. It’s not that they’re buying less, they’re just buying different.”

But while the success of the capsule line, as well as Theory for Good, are crucial to Theory 2.0, its more esoteric elements are fostering a new culture across the company. That means an increase in cross-departmental collaboration and added support for rising female staff. (The company has already hosted seminars in New York and Los Angeles featuring notable female entrepreneurs, with more slated.) “I work on the wholesale side, so I didn’t really have exposure to our stores or marketing — all of these other functions within the company,” explains Theory 2.0 member Ricki Segal. “This role involves that holistic view.”

The idea is to mix the experience that my management and I have with young people in our company who are thinking in a whole new way.

It also means mentorship. For years, Rosen has served as a mentor to young designers, often subsequently investing in their businesses. “I wanted to do the same thing inside,” he says. “[Theory employees] should get the same opportunity.”

After all, legacy brands no longer possess the allure that they once did for young employees, who increasingly prefer to work at startups — or start their own companies — over corporate life. (Only 14 percent of 2016 college graduates in the US would prefer to work at a large company, with 70 percent valuing “workplace culture and growth opportunities over compensation,” according to a 2016 survey by management consulting firm Accenture.)

What that boils down to: the next generation wants to work for a leader who inspires. Rosen, whose endless curiosity has kept him actively engaged in the industry for more than three decades, may still fit the bill.

“I want Theory to survive — and be relevant — for the next 20 years and beyond,” Rosen says. “The idea is to mix the experience that my management and I have with young people in our company who are thinking in a whole new way. So much of the world has changed.”

Theory 2.0 may be Rosen’s greatest chance to change with it.