NEW YORK, United States — When Arden McMillin was a teenager, she bought all of her intimates from Victoria’s Secret. It was what her friends did, too, from practically the only option in town.

She has since ditched the garments as an adult. “I don’t feel like it was made for a real human body,” she said. For the past couple of years, the 23-year-old graphic designer living in Baton Rouge, Louisiana, said she’s been wearing the same bra from a brand whose name she can’t recall.

As for underwear, McMillin picks up white cotton Hanes while she’s shopping at Walmart.

“I saw the look on Bella Hadid and it just stuck with me,” she said.

McMillin, a Gen Z Instagram user, is theoretically the target demographic for the crop of new, digitally native brands that pitch themselves as the next Victoria’s Secret, having knocked the lingerie giant off its perch with better-fitting products and body-positive messaging. The list includes newcomers like ThirdLove, Adore Me, Knix, Fenty x Savage, Negative Underwear and MeUndies.

Diversity and inclusivity have gone from nonexistent six years ago to table stakes today.

But the reality is more complicated, and apathetic consumers like McMillin are one reason why. America’s biggest women’s underwear seller is still Victoria’s Secret, which was acquired by Sycamore Partners last month, with a 17.7 percent market share in 2019 — down from nearly 32 percent in 2013, according to Euromonitor. Even Victoria’s Secret is now embracing inclusive marketing, casting its first trans and plus-size models last year.

Digital upstarts like ThirdLove combine for 36 percent of the market as of 2018, up from 28 percent in 2013, according to Euromonitor, but no brand can claim more than a sliver on its own. The biggest direct competitor is Aerie, the fast-growing, American Eagle-owned brand that saw its annual revenue surge to $800 million as of the end of 2019, the company told BoF, up from $646 million the previous year. Aerie incorporates body-positive messaging but has taken a conventional approach to growth, opening stores across the US.

Of course, it’s not just the “disruptors” fighting for Victoria’s Secret’s diminishing slice of pie. Traditional players like Hanes, Fruit of the Loom and Jockey have massive wholesale businesses (accounting for men's underwear as well, Hanes is the underwear market leader globally), while big-box retailers like Target are launching their own underwear brands. Activewear brands including Nike and Lululemon are gaining share with their sports bra offerings as well. Amazon sells underwear from its own labels in addition to department-store stalwarts like Calvin Klein. 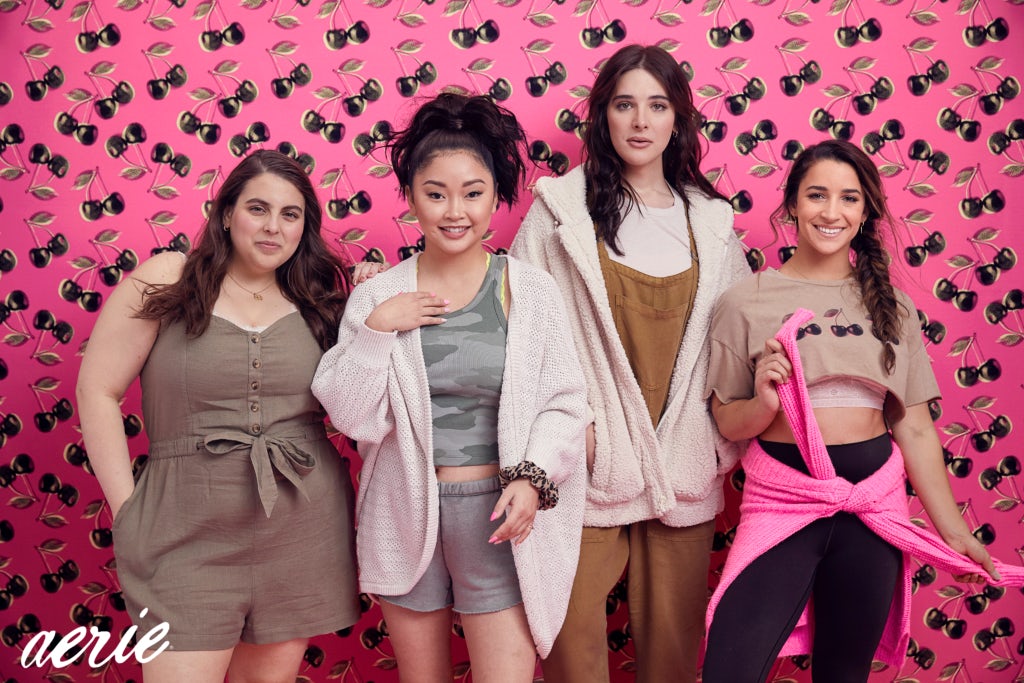 While Victoria’s Secret and other decades-old vendors may be losing relevance, the women's intimates market is more competitive than ever. Underwear is a relatively easy space to break into, analysts say — and with low barriers to entry, an entrepreneur with a Shopify account and the right branding can make a splash.

Parade, for instance, came onto the scene just 16 weeks ago, offering $9 thongs and boyshorts. With a robust network of influencer friends and marketing that champions size inclusivity as well as gender expression, the startup has already sold 85,000 pairs of underwear.

“[But] it can be such a revolving door with disruptors,” said Supriya Jain, a principal at Gartner covering specialty retail and activewear. “ One day they’re in, one day they’re out.”

Aside from Aerie, could any of the new challengers become a significant player in the underwear market — or even exist in their current form in a few years? Experts say there’s unlikely to be a single winner from Victoria’s Secret’s fall, and that the brand could still see a resurgence under new management. But there are ample opportunities to capture sales. A fragmented market means niche labels can thrive.

“There’s this idea … that there’s only one seat at the table when actually there’s many more than that,” said Amber Tolliver, a former long-time lingerie model and founder of a new lingerie brand called Liberté. “It’s a big pie.”

Victoria’s Secret operates over 1,000 stores in North America. Enter a mall in the US or Canada, and you’ll almost certainly find one of the brand’s locations, and probably a second shop for its Pink label as well. Many of those stores are white elephants, operating out of struggling malls or requiring big investments to freshen up their appearance. The company closed more than 50 locations last year.

Meanwhile, Victoria’s Secret’s rivals see a bright future in brick-and-mortar retail. Aerie opened dozens of stores in the last year alone, often in booming malls. As of the end of 2019, it has 322 locations. Digital brands are opening stores on a smaller scale; ThirdLove is testing out a fitting store concept in New York, and MeUndies received an investment from mall operator Simon Property Group in 2015.

If you’re going to be accessible, you have to think about the range of price points and a physical footprint that’s over hundreds of stores.

Wholesale can be a faster, less resource-intensive way to reach more customers, said Oliver Chen, a retail analyst at Cowen.

“If you’re going to be accessible, you have to think about the range of price points and a physical footprint that’s over hundreds of stores,” he said.

MeUndies, founded in 2011, plans to use its relationship with Simon to leverage a future retail network, according to co-founder Jonathan Shokrian. It currently operates two stores, both in California. But the brand doesn’t want to rush into wholesale partnerships. “It’s all about timing,” he said. "For us, the customer experience is the most important [factor], and you lose that touchpoint once you have a partner involved.”

A number of even newer entrants to the space are embracing wholesale from the get-go. Liberté pivoted into wholesale with boutique accounts throughout the US within six months of launch.

“It’s impossible to scale without some sort of physical existence but that doesn’t need to mean stores,” said Gartner’s Jain. “It could be pop-ups, or a store-within-a-store,” like what Nordstrom is doing with a number of DTC brands.

Sports bras are underwear too

Another challenge for the likes of ThirdLove and MeUndies is the invasion of athleticwear brands into bras and underwear. According to a 2019 NPD report, about one-third of bras purchased by Millennials were sports bras, a category that has grown significantly over the past three years as young consumers favour comfort and an active lifestyle. Brands benefiting from this shift include Nike, Lululemon, Adidas and others in the traditional activewear space.

Mindshare has shifted from lingerie toward athleisure.

“Mindshare has shifted from lingerie toward athleisure,” said Sujata Dantiki, director in the consumer and retail practice of consultancy SSA & Company. “The types of fabrics and functionalities that she’s asking for is now more livable, can be washed and worn day-to-day, for multiple purposes, from yoga to spin class to coffee shop to the office.”

It’s this lifestyle shift that fuelled the growth of bralettes in the past five years, and that’s now popularising products like Knix’ pullover bra that consumers wear under shirts and blouses as well as for working out. Aerie was an early adopter of the bralette, and now looks to categories like leggings, swimwear and fleece as growth drivers for the brand, according to Jen Foyle, Aerie's global brand president.

Few have an intimate relationship with their underwear

Spadafora, 33, recently discovered Cuup, a direct-to-consumer brand that sells $68 mesh bras and $18 briefs. Within two months of ordering her first bra, she bought two more. She was so jazzed about the brand, she said, that she attended an out-of-town pop-up event.

“The initial leap is always a risk,” Spadafora said. “But once I find out it’s good quality and good fit, I’ll definitely come back.”

For underwear, though, Spadafora isn’t so picky, and she’s not alone in that.

Once I find out it’s good quality and good fit, I’ll definitely come back.

“Underwear has always been more of an impulse purchase,” said B. Riley analyst Susan Anderson. “You’re not going to stores to buy underwear specifically.”

But Cami Tellez, the 22-year-old founder and CEO of Parade, is hoping that low prices and cheap shipping will create loyal customers.

So far, 15 percent of Parade shoppers have come back in the first 30 days. Tellez is also hoping that by capturing a younger demographic — ages 18 to 30 — these customers will stay with the brand for the long run.

“They're building a relationship with a brand that's going to last them for the next five to 10 years,” Tellez said. “And this is what makes this category so compelling: Loyalty is embedded in the DNA of how women interact with the product.”

Others see subscriptions as a way to build loyalty. Spadafora uses a service called Booty Bag that sends her two pairs a month for $15.

“It’s not the best but if my Victoria’s Secret underwear is going to fall apart anyway, I might as well try this,” she said.

MeUndies offers a monthly subscription where members can buy items at lower prices than what's offered at retail. With 1.5 million customers, most of who purchase multiple times, MeUndies is expected to reach $100 million in sales this year, according to Shokrian.

That figure is tiny compared to Victoria’s Secret or Hanes, but these young brands see an upside.

“If you think of Hanes for instance, they’re 100-years-old,” Shokrian said. “Jockey is [140]-years-old. VS has been around for 40 years. So the fact that in our eight years we’ve been able to reach half a percent of share is just the beginning.”