NEW YORK, United States — Abercrombie & Fitch Co. was heralded on Wall Street as one of the mall brand retailers that had found its groove despite the sweeping changes brought by the e-commerce boom. So it was a particularly crushing disappointment when the retailer reported slower-than-expected first-quarter sales on Wednesday.

Shares plummeted by 25 percent in the hours after the report’s release, which saw comparable sales increase 1 percent year-over-year, below analysts’ average forecasts for 1.3 percent, according to CNBC. The company saw that metric increase 5 percent in the same quarter last year. Even teen brand Hollister, which had been outpacing sister brand Abercrombie and most other mall peers, showed signs of coming down to earth, growing 2 percent vs 6 percent last year.

The company also said it expects next quarter’s comparable sales to be flat (they increased 3 percent in the same quarter last year), and announced plans to close three flagships stores in Soho, Milan and Fukuoka. The parent company has trimmed its store network from 1,100 to 861 over the last eight years and expects to close 40 in total in 2019.

Several analysts said the market’s harsh reaction was a case of too-high expectations; shares were up 26 percent year-to-date before Wednesday’s crash. Abercrombie, the company, is seen as having made a series of smart decisions after a tough stretch earlier this decade, including revamping stores and hiring a new designer to refresh the brand’s image and design. The company has also avoided taking on large amounts of debt, a burden that has hampered peers like J.Crew from executing their own turnarounds.

But the company’s weak sales demonstrated that even brands seen as making all the right moves aren’t immune to pressures hitting brick-and-mortar retailers, from a cooler-than-normal spring that decreased mall traffic to the years-long trend of customers deserting stores for online shopping. The response to Wednesday’s results represent a reset from the relative optimism seen in the market last year, analysts said. 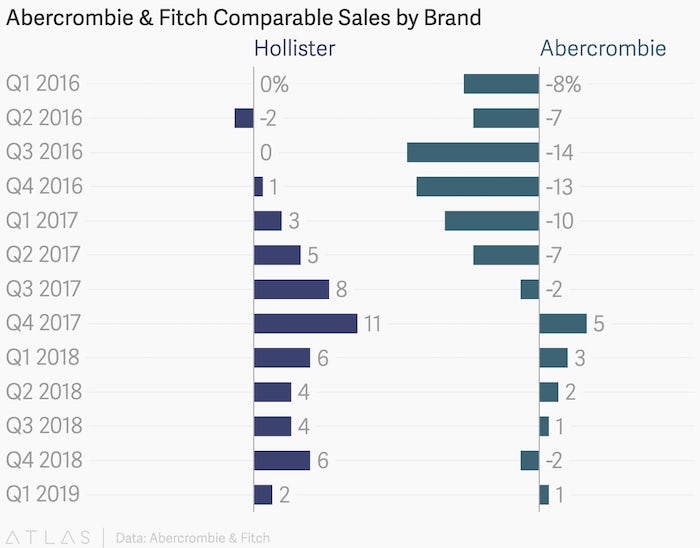 “These companies have been operating from such a position of perceived death that as soon as one starts to show signs of life investors get very excited very quickly,” said Simeon Siegel, retail analyst at Nomura Securities. “In retail, your successes become your worst enemies.”

Abercrombie is in its second year of a turnaround plan that follows years of challenges following the 2014 exit of Chief Executive Mike Jeffries, who turned the brand in a status symbol of Americana posh prep in the 1990s and 2000s. The brand grew less popular as the mall sector began to suffer because of online competition and an over-reliance on discounts.

The company has walked away from its signature image, reformatting stores (and ditching the shirtless models) and bringing in new design talent. Aaron Levine was hired to oversee men’s in 2015 and promoted to lead women’s and rebrand marketing the following year. His collections have been praised for bringing a missing cool factor with wearable basics that still fit the brand’s Americana heritage.

In an earnings call on Wednesday, Chief Executive Fran Horowitz trumpeted the stabilisation at Abercrombie, the brand, which crossed over to positive comparable sales again after decreasing in the last quarter of 2018. She also said that she is committed to opening and remodelling stores. The company said it expects to open more locations than it closes this year. However, the remaining 15 flagships are a drag on the top and bottom line. The flagships that will close represented less than 1 percent of sales in 2018.

The company remains on track to meet its 2020 turnaround goals, and its underlying strategy of investing in e-commerce while closing stores is sound, said GlobalData Retail Managing Director Neil Saunders in a note.

“The company’s willingness to sacrifice even high-profile stores, if they do not generate profitable benefits in sales or in terms of driving online revenue, is prudent,” he wrote. “We believe that there is a lot more runway that will allow Hollister to grow over the next few quarters, especially as product investment and innovation continues.”

Others saw trouble in Abercrombie’s struggling international business, where net sales decreased by 6 percent in the first quarter. A partnership with Tmall in China underperformed. And the weaker-than-expected performance at Hollister was particularly worrisome. The brand, which targets a younger audience at a lower price point, is less burdened by its past and has seen success recently in categories like swim and lingerie with its sub-brand Gilly Hicks.

“They got hit on all angles,” said Gabriella Santaniello, founder of retail consulting firm A Line Partners. “Hollister has been their shining star and an example of great retailing and good branding, and I think the fact that it slowed a little gives everyone the jitters.”

Gap and Old Navy Are Breaking Up