Exceptional shopping centres can thrive even in the middle of a pandemic. What separates the winners from the losers? And where should brands place their bets?

Exceptional shopping centres can thrive even in the middle of a pandemic. What separates the winners from the losers? And where should brands place their bets?

NEW YORK, United States – For seven years in a row, Stephen Summers flew to Paris to meet with the Goyard family and convince them to open a store in Highland Park Village, the mall he manages in Dallas.

Finally, he succeeded: the French leather goods maker opened a store there – its first in the US South – last November.

Summers credits unique offerings like Goyard for helping Highland Park Village weather the pandemic better than most brick-and-mortar retail. Foot traffic at the shopping centre, which also hosts outposts for Chanel, Celine and other luxury brands, was only down about 12 percent between Sept. 28 and Oct. 11, compared with upwards of 50 percent for many other US malls, according to Placer.AI, an analytics firm.

There’s an element of luck in Highland Park Village’s success: it’s an open-air mall, making it easier for shoppers to practice social distancing. Its well-off customers have taken less of a financial hit from the pandemic, and some are steering spending toward fashion that was once earmarked for travel or dining out.

Still, Summers’ mall and a few others have managed to thrive even compared with similarly well-positioned rivals. The extra flourishes they add to the standard brick-and-mortar playbook are likely to be adopted widely after the pandemic, when analysts project up to 25 percent of malls open today will have closed.

Identifying the success-making factors of a shopping centre is also crucial for brands looking to expand their retail footprint. Online-savvy consumers need a compelling reason for an in-person excursion. Opening in the right location will guarantee traffic, but a wrong choice could mean being stuck in a dying mall.

The very successful mall operators, they know who their people are.

BoF took a look at what makes Highland Park Village work, and identified three other still-bustling malls that are outperforming their peers in terms of traffic recovery: Bal Harbour Shops in Miami, Fashion Island in Newport Beach, Calif. and Oakbrook Center in the Chicago area. Today’s retail landscape is hardly friendly to malls. But these shopping centres are exceptional because they have the flexibility to deliver on customer demands as well as the right appeal to tenants, with whom they work together to drive sales.

“The very successful mall operators, they know who their people are,” said Jonathan Schley, vice president of global retail advisory and transaction services at CBRE, a real estate brokerage. “They’re places that bridge the gap between local and interesting new concepts, and are good at attracting new tenants.”

The Mall as Its Own Fashion Brand

In adapting to the pandemic, Oakbrook Center quickly realised that its shoppers were coming to the open-air property not only to peruse apparel and homeware but also to hang out at a time when few other venues are safe. At the centre of its property is a large lawn, where the Brookfield-owned mall screens movies, hosts events like yoga class and invites shoppers to sit down within the circles that it has painted to enable social distancing.

Investing in the brand and experiences unique to the shopping centre itself will be critical for success in a modern retail landscape. Consumers, after all, have fewer and fewer reasons to shop in person these days, and the most up-and-coming tenants prefer street retail, according to Chris DeCrosta, founder of GoodSpace NYC, a real estate firm that has worked with brands like Glossier and Supreme.

This is because young shoppers in major cities tend to prefer retail neighbourhoods like SoHo and Melrose Avenue in LA. And for young brands, working with large landlords often means being pressured to commit to five or six locations — something they neither desire nor can afford.

Bal Harbour has become a name that’s synonymous with fashion.

While hosting events and building community were effective tactics to draw in customers long before the pandemic, fostering loyalty is more important than ever among today’s flighty, picky consumers. Bal Harbour Shops, for instance, launched a loyalty rewards program earlier this month, giving members exclusive store experiences, birthday gifts and other gifts with purchase.

“We are treating the property like a brand,” said Matthew Whitman Lazenby, the property’s chief executive. “We aren’t Chanel. But Chanel is one of our tenants and through osmosis and the past 55 years, Bal Harbour has become a name that’s synonymous with fashion.”

Summers’ pursuit of Goyard was somewhat unusual in the world of shopping malls, where traditionally retailers pitch themselves to landlords. The best malls pursue the tenants they want, even courting brands that aren’t actively looking to expand, brokers say.

Newer brands that don’t have much of a brick-and-mortar footprint are often more receptive to the pitch. And malls should seek out such brands in order to offer customers an experience they can’t find anywhere else.

One special tenant can be a game-changer. South Coast Plaza in Costa Mesa, Calif., last year, for instance, saw its traffic more than double year-over-year, largely as a result of its exclusive Kim Kardashian’s KKW Beauty pop-up, according to Placer.ai.

Landlords looking to draw hip but still tiny brands often need to offer incentives, as those labels may not have the capital to open a store in a prime location. Viable incentives include short-term leases and reduced rent for a brand that can bring something new. 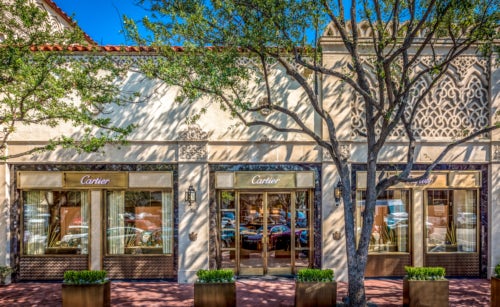 Highland Park Village, for instance, signed on LoveShackFancy as a tenant after a successful pop-up in the mall. The contemporary brand, founded seven years ago, has only five other locations. A potential pop-up with Ganni is also in the works.

“It’s not just about the luxury brands with money,” said Jay Luchs, a retail broker for Newmark Knight Frank who has worked with both tenants and landlords. “If a landlord can figure out how to do deals with the young, hip, student-level designer, that’s the answer. You have to be able to take on new brands to be different.”

Today’s most critical key player that makes or breaks a mall is often a restaurant.

As soon as outdoor dining was allowed in Florida in late spring, Bal Harbour Shops added more tables to its restaurant patios, which ultimately helped bring back shoppers, said Lazenby.

The fact that some of those restaurants, such as Makoto, are operated by chefs with international reputations helps too. Their halo effect extends to their neighbouring retail tenants, as diners will often shop after their meal or while waiting for their table.

“People go for food and then the next thing you know, they’re surrounded by retail, and retail sells well that way,” said Luchs.

Lazenby said his mall renegotiated the leases with many of its tenants, but the landlord granted rent relief to restaurants in particular because they required more investment to operate.

After he has wooed his tenants, Summers of Highland Park Village, who is an investor in the property alongside his family, likes to host events and dinners to celebrate them — and to drum up demand.

Summers has hosted private dinners for his clients in his home, with guests such as Gwyneth Paltrow, for when Goop held its pop-up store at the mall, as well as Domenico De Sole, chairman of Tom Ford International, and Tory Burch. For these events, Summers will allow the vendors to invite their top customers in the Dallas market. These dinners inspire loyal shoppers to forge an ever stronger connection with their favourite brands, while also creating buzz around new stores before they open.

Highland Park Village also has a mall-operated team of personal shoppers, who work with clients to help them shop at the various stores on site. This service is funded entirely by the mall but benefits its tenants by driving sales there.

And of course, during tough times, a little bit of generosity can come a long way. Landlords that are offering tenants rent abatement and other flexible terms during the pandemic will create goodwill and pave the way for more access to retailers in the future, said Luchs. “It’s a tenant’s world today,” he said.

The Case for Opening a New Store Right Now

Tapping Into the Future of Physical Retail