LOS ANGELES, United States — James Allen, the director of merchandise for Goldenvoice, the company behind popular music festivals including Coachella, Stagecoach and Panorama, is a master of “merch.” For each event, he works with multiple product vendors, sometimes up to 10, to ensure both depth and breadth when it comes to colour, design and price. “At Coachella, we have 20 different customer bases,” he explained. “There are the EDM fans, the people who are there for the legacy acts, the mainstream hip-hop kids.”

Quality, too, has become increasingly important as concert merch has evolved from souvenir to fashion statement, underscored by merch-like pieces released by luxury brands including Gucci, Balenciaga and Vetements. “The demand is absolutely higher than when I started doing this six years ago,” said Allen, who sourced roughly 70,000 pieces of merch for 2018’s Coachella Valley Music and Arts Festival. “And the expectations for the product itself are definitely higher.”

That’s why, this year, Allen looked beyond the typical “blank” T-shirt companies — think Gildan, Bella Canvas and Hanes — to boost Coachella’s offering. For instance, he bought a long-sleeved T-shirt — custom tie-dyed to his requirements — slippers and a hoodie from Everybody.World, the made-in-Los Angeles line founded in 2016 by two American Apparel veterans. The prices were higher when compared with some of his other vendors, but Everybody.World’s “willingness to be creative and try things is rare,” he said. “I didn’t flinch at the price.”

The business of 'blanks' — or 'imprintable' apparel and accessories — is a traditionally steady one.

Everybody.World, founded in 2016 as a consumer-facing basics brand, says the majority of its wholesale and business-to-business clients agree. The category now accounts for nearly 80 percent of its overall sales. Its Trash Tee, which is made of 100-percent recycled cotton is a hit with streetwear brands including Noah NYC and No Vacancy Inn.

Hospitality companies like upscale burger joint Shake Shack are now using Everybody.World’s products for gifting. Upscale cannabis retailer Med Men and the Standard Hotel group are using them in uniforms. Corporate clients including Google, Airbnb and Dropbox — which produce promotional merch for both internal purposes and marketing — have done custom orders. (For Airbnb, their first corporate client, they made a biodegradable laptop sleeve.) Over the past year, the venture has sold 100,000 Trash Tees alone to wholesale and business-to-business clients. “When we first penciled down on a napkin what our business would look like, it was 70 percent e-commerce and 30 percent wholesale stuff, where people would buy our blanks,” said co-founder Iris Alonzo. “Between then and now, our business has flipped.“

Perhaps Alonzo and co-founder Carolina Crespo should have anticipated as much. The business of “blanks” — or “imprintable” apparel and accessories — is a traditionally steady one. There are always little league teams that need custom T-shirts, law firms looking to brand employee gym bags and big fashion companies on the hunt for suppliers that can provide the blank canvases for graphic T-shirts and other screen-printed or branded items that will eventually be sold to the public. US sales of promotional products were more than $23 billion in 2017, up more than 9 percent from a year earlier, according to the Promotional Products Association International (PPAI).

“Promotional merchandise, with its stronghold in the promotional products industry and growing popularity in the fashion industry, is a two-sided market with economic benefits and growth opportunities for multiple platform players,” said Paul Bellantone, president of the PPAI. 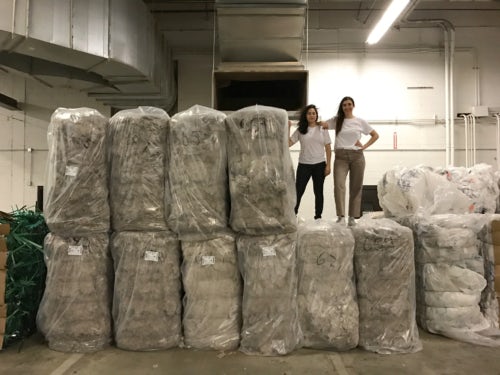 The rise of fashionable merch has not only sustained that growth, but also shifted the paradigm of what companies want from suppliers. “The biggest change is the trend toward ring spun T-shirts,” said Norman Hullinger, chief executive of Alphabroder, a Philadelphia-based distributor of blanks. “The basic [un-seamed] tubular T-shirt, with a hard, scratchy feeling, isn’t going to cut it anymore.”

Hullinger said that modern blanks companies like Bella Canvas, which generates more than $130 million a year in revenue, have benefited from this change in demand. That’s because brands and corporations alike are often willing to pay a premium for a better product.

Everybody.World’s tees are slightly more expensive than the typical ring spun T-shirt. A bulk order of 100,000 will price out at just under $4 a t-shirt — $3.80-$3.90 — where a lower-quality vendor may change under $3, and often less if manufactured overseas. A smaller run of t-shirts can cost $7.50 a piece. But the fact that they’re made in the USA, in a fair-wage factory, of 100 percent cotton — and in the case of Trash Tees, 100 percent cotton waste — is attractive to companies that want to practise the corporate responsibility they preach.

Some corporations are even reaching out to Alonzo and Crespo to help them recycle deadstock product instead of shipping it to Africa, which has become a dumping ground for second-hand clothing from wealthy countries like the United States. (In 2014, a cluster of countries called the East African Community — Burundi, Kenya, Rwanda, South Sudan, Tanzania and Uganda — received $300 million worth of apparel and shoes.)

Blanks will remain a compelling business long after merch loses its fashion cred.

For fashion brands, bands and concert organisers, Everybody.World’s design savvy, from the silhouettes and the colours to the hand feel of the fabric, make the up-charge worthwhile.

Meanwhile, Everybody.World’s wholesale traction has allowed Alonzo and Crespo to be thoughtful about their direct-to-consumer business, which is driven by a permanent collection of basics and a steady stream of unexpected collaborations with “contributors” including model-activist Adwoa Aboah, chef Angela Dimayuga and Prakash Gokalchand, a 76-year-old spiritualist and chess enthusiast.

But the company's swift success doesn’t suggest that other brands should rush into the blanks business, especially those without extensive manufacturing experience. In the past, companies that have attempted to balance blanks with business-to-consumer sales have not always succeeded.

Loomstate, the organic cotton brand founded by designer Rogan Gregory and Scott Mackinlay Hahn in 2004, is now primarily a wholesale player, while American Apparel founder Dov Charney has focused his new venture, Los Angeles Apparel Company, on wholesale after struggling to find the right balance between its B2B and B2C business lines in his previous venture.

However, there’s no denying that blanks will remain a compelling business long after merch loses its fashion cred. After all, the overall increase in sales of promotional merchandise is only partially related to its style status, said Martin Brochstein, senior vice president of industry relations and information at the International Licensing Industry Merchandisers' Association. For musicians, artists and other performers, merch is an increasingly important revenue stream and will likely continue to be so regardless of whether or not Balenciaga keeps making Kering-branded sweatshirts.

Have We Reached Peak Merch?