LONDON, United Kingdom — British multi-brand luxury boutique Browns, founded by Joan Burstein and known for being the first to stock Alexander McQueen and John Galliano, will close its iconic store on South Molton Street and move to a space further into London’s Mayfair district, four years after being acquired by Farfetch.

In the summer of 2020, Browns will set up shop at 39 Brook Street on the corner of Avery Row, a few doors up from Claridges Hotel, further away from the democratic thoroughfare of Oxford Street and closer to upscale Bond Street, London’s ground-zero for luxury retail, where it is expected to benefit from higher footfall and more affluent shoppers. The original store on South Molton Street will close at the same time.

Farfetch, a marketplace that connects consumers with a global network of fashion boutiques, bought Browns in 2015 and has significantly grown the boutique’s online business, tripled its in-store revenue and opened a second East London location called Browns East, where it has tested novel in-store technology like a shopping app which allows customers to make appointments, enter through a special entrance and flag a wish-list of products as part of Farfetch’s nascent “augmented retail” initiative. 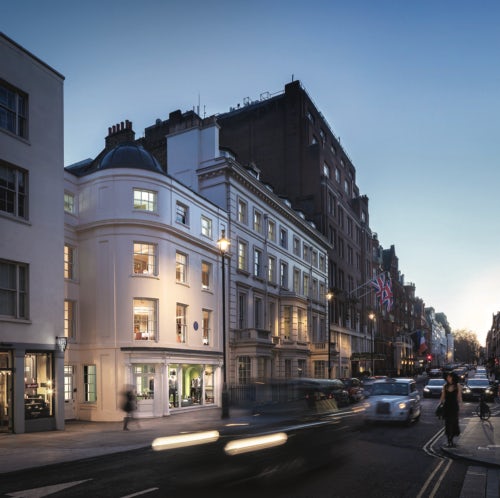 “We’re taking cues from Browns East, but it won’t be a direct copy,” Holli Rogers, CEO of Browns and chief fashion officer at Farfetch, said of the new boutique. “We will have the immersive room like Browns East, we will have the technology, but we need different personalities for our stores: we have the beast in the East and the beauty in Mayfair where we’re talking to a more refined customer but always with a cooler slant than you would expect in another location in Mayfair."

Browns first opened on South Molton Street in 1970. Burstein, known in the industry as Mrs B, and her husband Sidney introduced brands like Jil Sander, Comme des Garçons and Calvin Klein to the UK market and championed young upstarts including Alexander McQueen and John Galliano, building a global reputation.

But the luxury market has evolved, and the location of the original Browns store proved to be suboptimal for multiple reasons. For one, the South Molton Street flagship, housed in adjacent Georgian townhouses, makes for what Rogers called a “quirky” layout that is challenging for customers to navigate and has made it hard for the store to keep pace with new retail innovations and deploy Farfetch’s in-store technology.

The new space — which is 9,150 square feet or about the same size as the old store — will have a restaurant in a private courtyard space; a floor for exclusive capsule collections, collaborations and new brands; dedicated floors for womenswear and menswear; and a floor for styling, wardrobing and concierge services for high-spending customers.

What’s more, South Molton Street, close to the crowded and democratic thoroughfare of Oxford Street, lacks polish and a steady stream of high-end shoppers. “I’ve seen in many cities where it’s taken 10 years for the gentrification you want to happen to happen and I’ve watched [South Molton Street] not really move on,” said Rogers.

“Obviously Browns leaving South Molton Street is going to be seen by some as a major blow to its credentials as a destination,” said Savills director of commercial research Marie Hickey. “The Crossrail delay and associated disruption is generating short-term challenges, at this point, it's hard to convince retailers it’s a place they need to be,” she continued, referring to London’s forthcoming high-frequency railway line.

But some still believe in the long-term potential of the street. “Crossrail will bring 225,000 passengers a day travelling through Bond Street station, meaning a significant increase in the number of people walking through South Molton Street and the surrounding area,” said Hickey.