NEW YORK, United States — Hudson Yards, the 28-acre development opening next week over a rail yard in Manhattan, is more than just a mall amid luxury high-rises. For the brands that will occupy its glass-and-steel enclosed corridors, it’s their best hope to prove there’s a future in brick-and-mortar retail.

More than a decade in the making, what’s being touted as the biggest private real-estate development in American history cost $25 billion. When complete, there will be five office towers, 4,000 residential units, 1 million square feet of retail and an Equinox-branded hotel. Its art and music venue, the Shed, is reportedly in the running to house New York Fashion Week.

The retail section, which opens March 15, is anchored by Neiman Marcus’ first New York location, and its 100-odd stores include luxury mainstays like Cartier and Louis Vuitton, as well as online brands like Mack Weldon and M.Gemi. A Spanish food hall and a juice “cocktail bar” are among 20 food and beverage options, and a Kith-approved installation space, tailor-made for Instagram, is meant to attract younger crowds.

The project comes at a pivotal time for retail. Malls and stores have closed by the thousands over the last decade, as Amazon and other e-commerce players amass market share. Just this week, Abercrombie & Fitch, Victoria’s Secret and Gap announced they would shutter stores. Meanwhile, consumers are spending more on experiences and entertainment rather than clothes; Euromonitor predicts apparel spending will grow just 1 percent annually in the next two years, down from nearly 4 percent in 2016. Wallet share, instead, is going toward travel, entertainment, fitness and other lifestyle-driven activities. 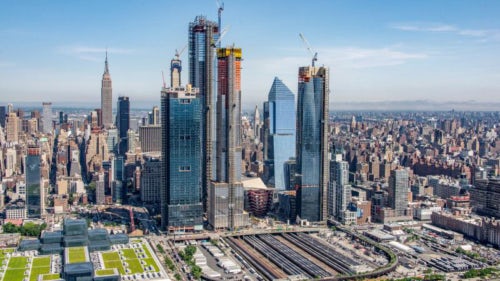 The shops at Hudson Yards are built with this fraught landscape in mind. The mixed-use development, a self-contained ecosystem of apartments, offices, public space and retail, is geared toward the idea of retail as a lifestyle. It’s also a concept that’s been fully embraced by luxury brands: LVMH acquired hospitality group Belmond in December, and has plans for a massive mixed-use space of its own in London (five of its brands, including Dior and Fendi, have Hudson Yards locations).

“Hudson Yards [shows] a remaking of urban retail — the remodelling of cities for the post-internet age.” said retail consultant Doug Stephens. “If you’re a luxury retailer like Louis Vuitton, you’re trying to follow that redefinition. It’s beyond carrying the trademark handbag. It’s more about lifestyle and the freedom to do what I want to do.”

The Shops at Hudson Yards was built around the idea that the overall experience, rather than the specific products on display, would drive sales, said Related Urban president and chief executive Ken Himmel. In other words, the stores shouldn’t be viewed in isolation, but as one piece of the development’s larger puzzle.

“Retail is as equally important as the restaurants, as equally important in programming hotels and cultural facilities, and all of those things become the matrix that make up the customer perception,” he said. “It’s about quality experiences at every element they touch.”

The development of Hudson Yards itself reflects the retail sector’s recent ups and downs. Conceived over a decade ago, before the collapse of traditional retail, the project was delayed by the recession. It’s among a number of other retail mega-developments opening up around the world. In Los Angeles, Rick Caruso unveiled Palisades Village last fall, and just across the Hudson River in New Jersey, the American Dream mall is set to open next month. In London, Coal Drops Yard debuted late last year. In the Middle East and China, developers see even bigger opportunity to build out retail as Asian markets gain spending power.

In the US, it remains to be seen whether the retail strategy deployed at Palisades Village, Hudson Yards and other developments will work. The question: will people actually spend money on handbags and shoes in between snacking on tapas and posing for Instagram photos inside an adult ball pit?

Himmel and his team were able to attract retail tenants with projected sales figures based on annual traffic of 15 million to 22 million people, a large portion of whom would be tourists. But tourism is down in the US, and Chinese visitors — a key market for New York luxury retail — are opting to spend more of their money at home. Despite its proximity to the High Line, Hudson Yards will be competing with myriad luxury retail destinations in Manhattan — including Related’s own Time Warner Center in Columbus Circle. 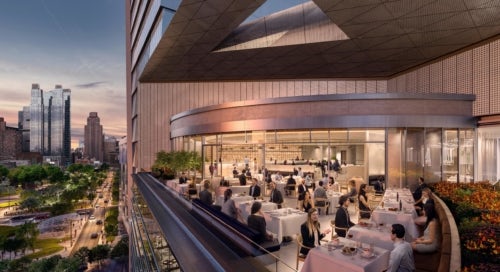 The Shops will be 90 percent leased on opening day — an impressive rate for a new project. The risks are low for some initial tenants: many were offered one- or two-year leases instead of the standard 10-year contract. It’s also standard practice for developers to offer tenants incentives, like free rent, to entice them to move into a new development. (Related maintains that no tenant received free rent.)

Meanwhile, brands still looking to open brick-and-mortar locations have their pick of spots. Mass closures and bankruptcies have led to an oversupply of retail real estate in the US, forcing landlords to accommodate shorter leases at lower rates.

“We’re at a point where there are simply fewer retailers looking. The joke is over. We all know things have changed,” said Jay Luchs, a retail broker based in LA for Newmark Knight Frank.

The joke, of course, is that those in retail real estate have finally accepted the fact that while consumers today still shop in-person, the space needed is much less than the current supply. This is why Hudson Yards — along with like-minded new projects such as Palisades Village — needs food and activities to drive retail.

In the US, sales at food and drink establishments last summer grew at its highest rate in more than 20 years, and overall experience spending — fitness, museums, dining out, etc. — rose 6.3 percent between 2014 and 2016, versus just 1.6 percent for total goods, according to a 2018 McKinsey report.

Related will count on commercial leasing and condo sales for profit, rather than retail, which may yield little return for the landlord in its initial years, brokers say. Such is the case with any mixed-use development today. This means that for Related, the success of Hudson Yards is not contingent on its retail portion. But for its retail tenants, choosing to be a part of this project is still a gamble.

Symbolically, Hudson Yards is supposed to be a beacon of modern retail: the culmination of experience, luxury and technology that ensures seamless online-offline shopping, and the perfect experiment to test out optimistic hypotheses about what works in stores and what doesn’t.

Related has done its homework, and that’s the scariest, most foreboding factor. Because if Hudson Yards turns out to be a bust, then what chance does mass-scale retail stand elsewhere?

Op-Ed | It's Not Retail That's Dying. It's Our Imagination.