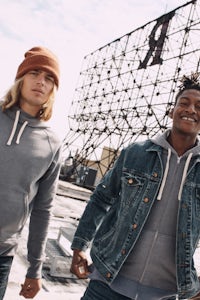 NEW YORK, United States — After years of will-they-or-won’t-they whispers, Madewell, the fast-growing, cool-hunting label owned by the J.Crew Group, is launching menswear. The 38-piece collection, featuring 21 stretch-denim styles in three fits — as well as t-shirts and jackets — will hit Madewell.com/Mens on Wednesday, September 12.

For now, however, the expansion into men's is primarily a wholesale play, available at 31 Nordstrom stores across the US and on Nordstrom.com. Madewell’s own fleet of more than 120 retail stores will not carry the line at present.

Despite the modest rollout, a men’s line signals a big opportunity for Madewell as it is slated to blow by $500 million in sales this year. A saving grace for the J.Crew Group, which is in the midst of turning around its flagship brand, Madewell products are now even sold on J.Crew.com and in select J.Crew stores. Madewell currently drives about a fifth of the company's overall sales, but that slice could increase with category expansion. (J.Crew already operates full-fledged men's and kid's lines.)

In its most recent fiscal quarter, sales at Madewell stores open at least one year were up 28 percent. Sales at the J.Crew brand were up 1 percent, mostly thanks to cost cutting and promotions. In a recent interview with BoF, J.Crew Group chief executive Jim Brett said that fueling future growth at Madewell remains a top priority. “I very much believe in funding what's working first,” he said.

From the start, Madewell Men’s will have its own Instagram account, a differentiated shopping experience and a look that complements, but doesn't mimic, the women's line. The brand's recent “Join the Party” advertising campaign — meant to underscore the label’s expanding size range — also features guys wearing the collection.

“I don’t want it to feel like it's just a tab on the women’s site,” Madewell president Libby Wadle told BoF. “We need to be very deliberate.”

Since 2013, Madewell has worked to solidly position itself as a denim leader, not simply an apparel retailer. Mary Pierson, a veteran of J Brand and Gap Inc., oversees denim development at the group and led the team that conceived the denim collection.

According to Wadle, the jeans are differentiated by price — they start at $115, compared to upscale denim brands that often sell for over $200 — and also by material. While the women’s denim market has moved toward a wider leg and more rigid shape — sometimes with zero stretch — this collection is entirely stretch-denim. Wadle is confident it achieves the look and hefty feel of 100 percent cotton.

The fits — skinny, slim and straight — are narrower than what’s trending on the men’s runways in Paris.

“We shopped the market and saw that there was a huge opportunity for vintage-inspired denim that looks authentic,” she said, adding that the men’s mass market has been slower to embrace wide-leg jeans. Wadle and her team will spend the next few months closely watching which styles resonate and will add and subtract from there.

And while men’s signifies a major stepping stone for the Madewell brand, Wadle has plenty of work to do on the women’s line too, which has been on an upward trajectory since it relaunched denim in 2013. Five years of success is a long time in the hyper-cyclical world of specialty retail. How will she keep it going? “We need to continue to evolve and stay in front of what’s happening,” Wadle said, mentioning that we may see more of Madewell Commons, a community-driven store concept that opened in Austin this past July. “We have to keep that energy going.”