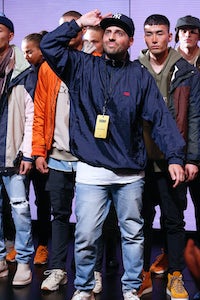 NEW YORK, United States — Streetwear wunderkind Ronnie Fieg is on the rise. His mini retail empire Kith is growing at a steady clip. Just three months after a $2 million renovation of his Brooklyn store, he quietly opened a cosy, 400-square-foot women’s store across the street from his Soho location, catering to a swelling cadre of female sneaker and street fashion devotees.

Spurred on by the global growth of labels like Supreme and the rise of Virgil Abloh’s street-influenced fashion line Off-White, a finalist in last year’s LVMH Prize, the expansion and legitimization of the streetwear movement started by companies like Stüssy has given birth to a lucrative space at the intersection of youth culture and high fashion.

“There were lines there before and then they got blurred. Now, there are none at all,” says Ronnie Fieg, who got his start, aged 13, as a stock boy for shoe chain David Z and went on to collaborate with everyone from Adidas to New Balance to Polo Ralph Lauren, along the way becoming one of the most prolific sneaker designers of all time. 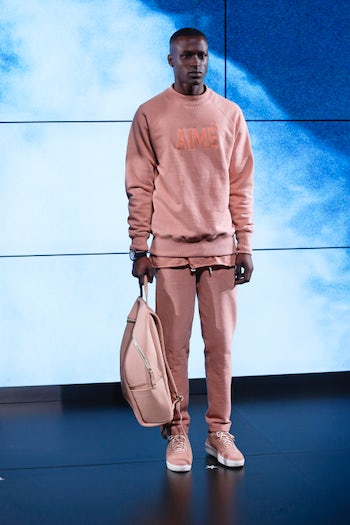 Kithland also marks Fieg’s latest outpost, a shop-in-shop inside luxury department store Bergdorf Goodman, right across from the space that houses Thom Browne. For Fieg, the outpost at the retailer’s men’s store represents something of a homecoming. His mother and grandmother revered Bergdorf Goodman as the be-all and end-all of New York luxury shopping institutions. And with labels like John Elliott, Fear of God, Off-White and Public School already carried there, Fieg’s arrival complements the venerable department store’s expansion into high-end streetwear.

“Bergdorf Goodman has this history of innovation and finding and nurturing the next generation of menswear stars,” says Joshua Schulman, president of Bergdorf Goodman and Neiman Marcus Group International. “[Ronnie Fieg] approaches his brand with the same level of perfection and is really focused on the design and customer. In many ways, he has the same qualities as some of those household names that were discovered here.”

In addition to carrying Kith’s main line, Bergdorf Goodman will sell an exclusive Kith x Bergdorf Goodman Capsule collection of six limited-edition styles, including a hoodie, sweatshirt, tracksuit, t-shirt and wool baseball cap. The collaboration is the first time the Bergdorf Goodman logo has appeared on the outside of a garment. Importantly, product will also drop on a schedule that’s more like an ongoing feed than a traditional fashion cycle.

“When Ronnie proposed his idea of this core collection augmented by limited-edition collaboration product that would have organic demand generated by social media, we were very attracted to that idea,” adds Schulman. “The beauty of a place like Bergdorf Goodman is our ability to work in an intimate way with creators and brands on a business model that suits them, and how we can adapt that within our walls and website.”

The one thing I learned very early on from meeting Ronnie is that he takes special pride in becoming a disruptor.

“Consistency is key. Just like the apparel needs to evolve and stay within the same language and not stray too far left or right, it’s the same with the buildouts and designing spaces,” says Fieg. “It’s huge to the fundamentals of our business and where I want to be moving forward.”

For Kithland, Fieg enlisted the help of casting director Kevin Amato, stylist Eugene Tong and creative director Nate Brown (who has designed concerts for Jay Z, Beyoncé and Kanye West) to flesh out his vision. “The great thing about Ronnie and his brand is that he has such a strong foundation for the story he’s trying to tell,” says Brown. “He came to me primarily to ask how to tell that story, and do it in a way that doesn’t fit in the mold of what has been done before. [Ronnie] kept saying: 'Don’t call it a fashion show. It’s going to be a fashion experience.’” 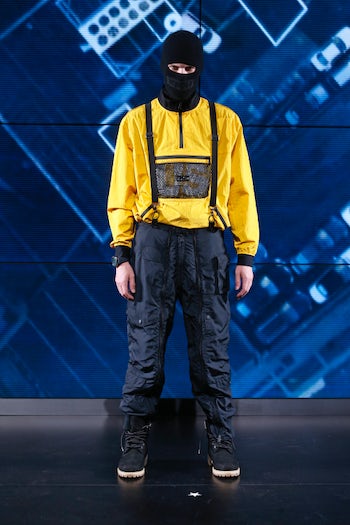 Kithland leveraged Brown’s full set of skills as both a concert designer and creative director, lacing the runway format with video content and short performances by New York-based rappers Fabolous, The Lox, and Mase.

“He said this is the most important moment in his career. This is his first show, and he wanted to come out in a way that felt like he’s innovating in that space,” adds Brown. “The energy I got from him was to make it as unifying as possible — this brand that really solidifies itself as a staple not only in New York, but this expanding market that he’s moving into — and to really have this joyous moment of collaboration.”

The clothes shown were divided into three themes — Beach, City and Mountain — representative of Kith’s New York roots and plans to open outlets in Miami and Aspen, Colorado. The product stayed within Fieg’s established aesthetic of commercially viable hoodies, sweatpants and distressed denim, with new categories like a burgundy fleece robe inspired by Aspen, colourful sportive swimwear perfect for Miami, and a collaborative textured sherpa teddy jacket done in collaboration with Japanese label Ones Stroke.

Considering Fieg made his name from the success of his footwear, it’s no surprise that the shoes stood out. He continued several collaborations with shoe companies like Asics, Timberland and Adidas. New sneaker offerings included several monotone versions of A Bathing Ape’s signature “Bapesta” trainer, a sneaker modeled after the iconic Nike Air Force 1. Done up in supple suede in neutral tones like tan and soft pink, he’s dubbed his version the “Fiegsta.” He’s also linked up with Jerry Lorenzo of Fear of God on several pairs of high-top military sneakers and Virgil Abloh of Off-White on rugged hiking boots.

“The one thing I learned very early on from meeting Ronnie is that he takes special pride in becoming a disruptor. He resonates with the youth and youth culture,” says Tong. And judging by the throngs of young people waiting to get inside the show, Fieg has quite the engaged fanbase. “Very few brands have that power that he has.”

Just showing fashion-forward looks doesn’t make sense. There has to be some sort of real world application to it.

Despite the young age of some of his fanbase and the graphic-oriented, elevated sportswear look of his clothes, Fieg has a degree of disdain for the term “streetwear,” which he sees as limiting. He cites Vetements and Gucci as trading in similar subcultural, visual currency. “Guys who care about style don’t dress in one single designer or one single look. They mix it and make it their own,” adds Tong, underscoring the growing blend of high-end fashion and accessibly-priced street staples that increasingly fill the wardrobes of stylish young men. “Just showing fashion-forward looks doesn’t make sense. There has to be some sort of real world application to it.” 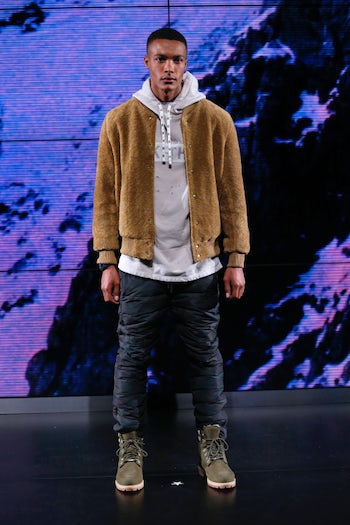 Kithland featured nearly 90 looks, shown on a multicultural cast of men and women with different body types. It’s not only reflective of the cross-cultural appeal of street fashion, but the varied population that gives Kith’s home city of New York its unique identity. “The message is: No matter where go, or where we show up, there’s still gonna be a New York element to it which doesn’t leave us. We still have that New York mentality,” says Fieg.

The collection also included several pieces made in collaboration with brands like Columbia Sportswear and Iceberg, a label Fieg is bringing back to the US market. (He had an idea of showing an exclusively-collaboration fashion show eight months ago, only to see Demna Gvasalia execute a similar concept for Vetements’ Spring/Summer 2017 show in July, which Fieg says he thought was done exceptionally well).

Kith also showed licensed collaborations with 1990s-nostalgia inducing properties like Nickelodeon’s Rugrats cartoon and Haim Saban’s Power Rangers, but perhaps the most left-field collaboration of the night was Cap’n Kith, an extension of his Kith Treats cereal and ice cream bars done with the Quaker Oats Company. What began as a passion project at his Brooklyn store was met with an overwhelmingly positive response, prompting Fieg to expand the concept to his Nike pop-up and forthcoming Miami and Aspen stores. “I always try to maximize the potential of whatever the idea is, but do it tastefully, organically, and grow it slowly,” he says. “We put a ridiculous amount of money into something we didn’t expect to return any money.”

“Kith should be a household name for people that want to be different, are into product that they can’t find everywhere, and easy-to-wear product that makes people happy,” says Fieg. “That’s what we do.”