NEW YORK, United States — Even by the standards of the troubled retail sector, the last few weeks have been rough.

Many of the fashion industry’s biggest retailers and brands, ranging from Gap to Nordstrom to Coach owner Tapestry, are trading near their lowest levels since the 2008 recession. Major retailers, including Macy’s, reported disappointing sales and growing inventories of unsold clothes with their financial results last week.

Investors are worried about a toxic mix of problems, from upcoming tariffs on Chinese imports to a potential recession. The concern is that companies already struggling in good times with declining mall traffic and fierce online competition will be overwhelmed if the economy takes a turn for the worse. Already this year, US retailers have closed nearly 8,000 stores, according to Coresight Research — and that’s before many of President Donald Trump’s tariffs kicked in.

Some analysts see these fears as premature. Retail sales rose in July and unemployment remains at a five-decade low. Fashion is still in the early innings of a new trend cycle, when consumers are looking for pieces to refresh their closets.

“A lot of investors remember 2008.… Now they’re just being overly cautious and jumping this recession gun too soon,” said Jen Redding, an analyst at Wedbush Securities. “The US consumer is nowhere near recession.”

That doesn’t mean there aren’t ways retailers can prepare for the worst. 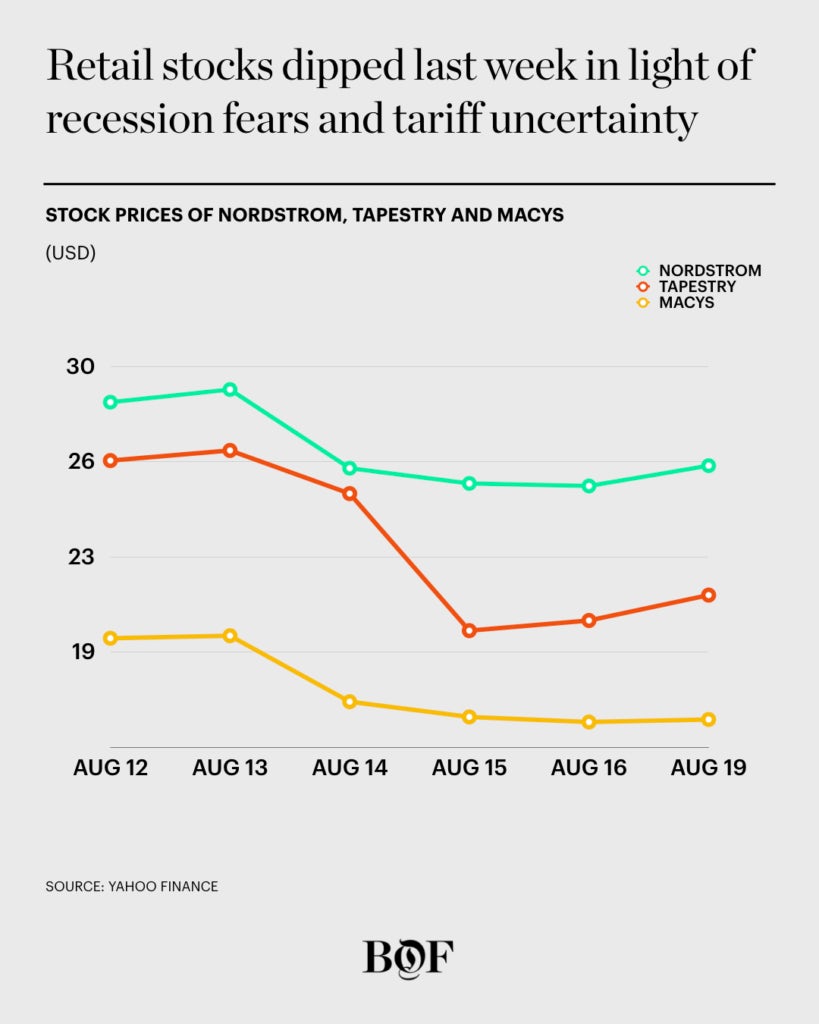 What Retailers Are Up Against

Recession fears dominated headlines last week because prices in the bond market formed a pattern that in the past has presaged a downturn. Investors have also pointed to declining manufacturing activity in major economies around the world, and forecasts that Germany and other wealthy nations may be on the brink of recession.

But in the US, the economy remains robust. Retail sales excluding cars, gas and dining out increased 0.9 percent between June and July, according to the Commerce Department. Compared to last year, July retail sales are up 5.6 percent. Unemployment is also low: 3.7 percent, as of August 2, according to the Bureau of Labor Statistics. Milder weather in July and August likely inspired people to shop even more.

The reality is not as bad as the stocks are reflecting.

“The reality is not as bad as the stocks are reflecting,” said B. Riley FBR analyst Susan Anderson, pointing to the continued high levels of consumer spending.

The tariffs may be harder to ignore. Trump tweeted in early August that the US would levy a 10 percent tariff on $300 billion in goods and products imported from China starting Sept. 1. He later said some of the tariffs would be delayed until December. However, many products will still be taxed next month, include infant apparel, silk accessories, secondhand clothing, footwear with rubber soles, knitted clothing and gold jewellery. Apparel included in the Dec. 15 list includes leather footwear and cashmere or wool sweaters.

“The big unknown is tariffs,” said Needham analyst Rick Patel. “How it will impact the sector is a clear negative but we just don’t know how big a negative that impact will be.”

But brands and retailers can try their best to mitigate the impact. Some vendors may be able to negotiate lower prices from their Chinese suppliers and convince their retail partners to take on some of the tariff burden. If not, the burden will likely be passed onto consumers with higher price tags.

Retailers can also order merchandise early so it arrives before the tariffs kick in, though that has its own risks.

“They could spend money on inventory that may not get moved,” said National Retail Federation Chief Economist Jack Kleinhenz. “My concern is that we still are in this limbo on whether or not those extra tariffs will go into place.”

It’s Still All About the Clothes

The factors that have long plagued retail aren’t going away — if anything, they’re getting worse, with or without a recession. Mall traffic is still declining and traditional retailers are looking at alternative models, including resale and rental, to appeal to younger consumers. Macy’s, Banana Republic and Urban Outfitters have announced monthly rental subscription services this month, while Macy’s and J.C.Penney have partnered with ThredUp to offer secondhand clothing to their customers.

In the second half of 2019, meanwhile, there are still plenty of opportunities for brands and retailers to generate sales, given the sustained fashion cycle that began last year.

“We have the retro trend that started last year and continued into this year,” Anderson said. “The newness isn’t as exciting but it will still drive sales and growth for those with the right products,” such as denim and looser bottoms. She added that American Eagle Outfitters, for instance, is well-positioned to take advantage of trends.

Inventory management will be particularly important moving forward, according to Patel, because if the economy slows, consumers will likely gravitate toward value and that means products will be more vulnerable to markdowns.

Tapestry, for instance, struggled with having the right Kate Spade product mix in its most recent quarter, in which the brand saw a comparable sales decline of 6 percent. The handbag label is still integrating products from its new creative director Nicola Glass, and the verdict on her new collection remains to be seen.

“We’ve seen consumers move on really quickly and expect change of product,” Cowen analyst Oliver Chen said. “With Kate Spade, you saw this with the Cameron bag [which was first introduced in 2016]. The consumer response was not good.”

In an interview, Tapestry Chief Executive Victor Luis said the company is prioritising newness in its products.

“Generally the two areas of focus for innovation is continuous wear-to-work and smaller cross-body bags … these things change quite rapidly,” he said. “In the case of Kate, we just need more time.”

Capri’s Michael Kors also posted negative comparable sales because of its inventory issues, as well as its overreliance on department stores.

“Kors has to continue to push toward innovation in footwear and apparel in order to reinvigorate their wholesale assortment,” said Needham’s Patel. “With its watches, for instance, it needs to address that Apple Watch has been gaining market share in recent years.”

Inventory will be something to watch with Nordstrom on Wednesday, when as the Seattle-based chain will report its quarterly earnings, he added, as Nordstrom has grappled with merchandising misses in previous quarters.