Autumn/Winter 2013 | The Season That Was

This season, no single moment dominated the fashion conversation. But there was still lots to talk about. Today, BoF brings you our bi-annual post-fashion month feature, The Season That Was.

PARIS, France — Another fashion season has come to an end. And what does the industry do for four weeks, as we sit next to each other at back-to-back shows and dinners? We talk, of course.

Unlike in seasons past, there was no single moment that dominated the fashion conversation. There was no Galliano meltdown or Raf Simons for Dior unveiling, though there were several young designers who made promising debuts in Paris, most notably Alexander Wang's faithful, marble-inspired collection for Balenciaga. Mr Wang's first collection was very well received, while Hedi Slimane still seemed to confound fashion critics, even if some buyers saw commercial promise in his 'California Grunge' collection.

But at fashion week, we don't only talk about the shows. There are plenty of other topics that had the industry buzzing, which we've distilled down for you in our bi-annual post-fashion month feature, The Season That Was.

THE RISE OF VINE

If recent seasons have been defined by the rise of Instagram, this season, as some slow-moving brands were only just launching their Instagram accounts (Dior, for one) others were embracing the latest app to take the fashion world by storm: Vine, launched by Twitter on 24 January 2013, just days before the start of the international collections.

The Vine wave began during New York Fashion Week with early adopters like WSJ and CFDA President Steven Kolb — “I’m a frustrated filmmaker!” he told me — and continued to pick up steam as the season went on. By the end of Paris Fashion Week, it seemed everyone had switched onto the new bite-sized looping video service.

With yet another social account to manage, however, having an efficient device and asset management strategy has become an important skill for bloggers and editors juggling Twitter, Tumblr, Facebook, Instagram and now Vine, while trying to take in and transmit the energy of a fashion show. BoF columnist and dedicated social media maven Susie Bubble has taken to 'double-fisting', using one smartphone to take video and another to take photos, with a sizable SLR camera balancing in her lap. Now that’s dedication.

But perhaps this is why the clapping at the end of shows seems to be dissipating, as Jefferson Hack quite rightly pointed out to me in New York, surmising that because everyone is so busy updating their social media accounts during show finales, they no longer take the time to acknowledge the designers’ hard work. 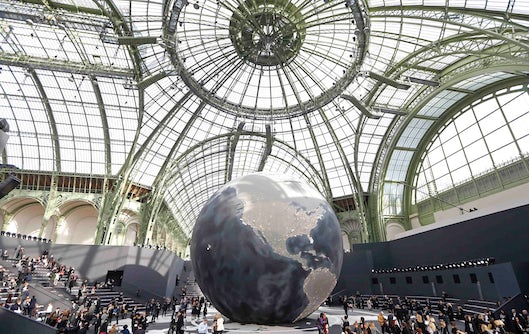 At least one designer managed to get everyone to put their phones down and savour the moment. Riccardo Tisci received a resounding ovation at the end of his show, possibly the best of his entire tenure at Givenchy, where a strong collection, elevated production values and spine-tingling music from Antony & The Johnsons came together in an unforgettable way.

Getting the right balance can be tricky. Rick Owens, for one, always seems to nail it. This season he created a set that swept the models’ blown-out hair with steam that hit their faces just as they stepped out onto the runway. Chanel put on another impressive, large-scale production at the Grand Palais, which was dominated by a single giant globe marking more than 300 Chanel stores around the world (revealing the brand's massive presence in Asia). Actually titled 'Globalisation,' the show was a commentary on the global force that Chanel has become in recent years.

Rising star Mary Katrantzou also upped her production game this season. At a late-night fashion dinner in Paris, I met highly-respected show producer Alex de Betak for the first time and we talked about the first show he worked on with Mary and the first he has staged in London since he started working with Hussein Chalayan more than a decade ago. Though Mary's show started more than 45 minutes late (much to the consternation of the British Fashion Council), it was worth the wait. Mr Betak explained to me how he used a bit of clever digital trickery to project images of the models on a screen at the far end of the runway before they had even emerged from the backstage area.

But while some designers were amping things up, others were paring things back, most notably Marc Jacobs, whose Louis Vuitton productions have sometimes overpowered the clothes — not always in a good way. But this season, there was no buzz-generating escalator or merry-go-round or $7 million steam train. In their place was a simple, elegant set of a hotel corridor with many, many doors and gorgeous music that enabled the assembled fashion flock to take in the collection more calmly, without detracting from the overall impact.

Perhaps the best example of the pared-back vibe came courtesy of Hermès, whose show in the stunning library of the prestigious Lycée Henri IV had only single-row groupings of chairs, each one of which created an intimate, living-room like feel from which to take in the sumptuous, ultra-luxe collection.

THE REAL MILAN FASHION WEEK IS IN LOS ANGELES 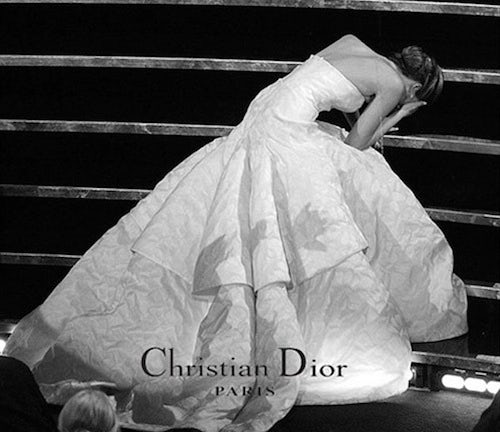 "The challenge here in Milan is the calendar. With just two to three shows a day — coming out of New York, where we do 12 to 14 shows and presentations, and London with 10 shows a day — we’re not maximising our time, and not optimising what we should be doing in this country," Ken Downing, fashion director of Neiman Marcus told WWD shortly after the conclusion of Milan Fashion Week. "They need to condense the calendar to put more shows within the course of the day, or they need to entice other designers to start showing here so that we’re filling this time in with collections that we should be looking at."

With honest feedback like that, the Camera Nazionale della Moda Italiana should start thinking about how to inject some new energy into Milan Fashion Week. Save for editors who need to make appearances in Milan to assuage testy advertisers, and buyers who must attend to buy into the city's megabrands, more and more members of the industry seem to be skipping Milan Fashion Week altogether, a trend that has been gathering momentum for quite a few seasons now.

But alongside Milan's lacklustre schedule, there may be another factor at work here. Since 2004, when the Hollywood's Academy Awards ceremony moved from mid March to late February, Milan Fashion Week has often found itself competing with the Oscars for global media attention. This year, the Oscars took place smack dab in the middle of Milan Fashion Week and all fashion eyes seemed to be fixated on who was wearing what on the red carpet in Los Angeles — not the runways in Milan. This year's big winner was Dior, which dressed both Jennifer Lawrence and Charlize Theron in beautiful couture gowns. The photo of Ms Lawrence falling on the stairs as she walked up to receive her Best Actress award went viral on social media, and was even re-purposed into a pseudo Dior advertisement.

In an article in The New York Times that came out shortly after this year's Oscars, Eric Wilson chronicled the impact of Oscars red-carpet dressing along with some interesting statistical analysis. As it turns out, the real masters of Oscars marketing magic are three Italian brands: Versace, Armani and Valentino, which collectively dressed 75 of the 418 women in the New York Times archive, which allows you to search and sort by brand, celebrity and colour. And that's not counting the legions of leading men who are also dressed by Mr Armani.

It's no wonder that the Italian brands are placing so much attention on the Oscars, which have become a marketing platform like no other, and especially powerful for reaching mass audiences to build an overall brand halo. But what could be the long-term impact of the Oscars on Milan Fashion Week?

We'll see. But next year, it looks like Milan will get a bit of a reprieve from the Oscars competition. Due to the Winter Olympics, which will be held in Sochi, Russia, in February 2014, the Oscars ceremony will likely take place in March, after fashion week is over.

IN PARIS, A LINGERING PROBLEM OF FASHION EDUCATION 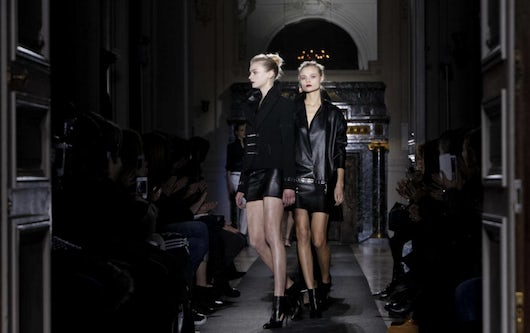 With the arrival of MADE in Paris this season, alongside other young designer initiatives including the 'Designers Apartment' hosted by the Chambre Syndicale and the Festival d'Hyères, the fashion establishment in Paris finally seems ready to nurture the talent that will define its future.

But according to Nathalie Dufour, a longtime supporter of young designers in Paris, there are still other issues that need to be addressed before Paris can develop a young designer ecosystem as vibrant as the ones in New York or London. Ms Dufour, who with Pierre Bergé co-founded the prestigious ANDAM prize in 1989, when it supported Martin Margiela on his first collection, knows a thing or two about talent spotting.

"In France, fashion is taught like an art," Ms. Dufour told me over tea. "It's been like that for a long time. In England and New York, every one knows it's an industry. For twenty years or more we have had this problem of [poor] training. French fashion education has to change, they are still focused on the bourgeoisie."

To wit, Maxime Simoens who showed his first ready-to-wear collection in Paris left a few editors, including this one, scratching their heads. Mr Simoens is clearly a talented young man, but his collection was far too short on ideas to justify sending out 40 looks down a long, winding runway, with a repetitive soundtrack. A tighter edit of his collection, focused on the strongest looks, would have helped him to deliver greater impact, especially when many editors were paying closer attention to Mr Simoens following a recently announced minority investment from LVMH. It was a missed opportunity.

Ms Dufour says another challenge for young French designers is the tradition of haute couture in France, which can sometimes weigh down designers like Mr Simoens, who has only shown Haute Couture until now. "It's a savoir faire, but no more than that. Point of view and personality is what we need [more of] in Paris." 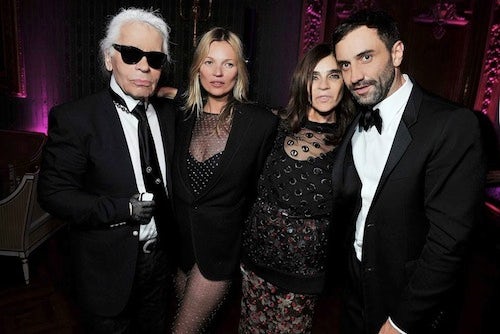 Fashion month ended with the must-attend party of the season, hosted by Carine Roitfeld and Stephen Gan to celebrate the second issue of CR Fashion Book, Ms. Roitfeld’s magazine, published by my friend, the affable Jorge Garcia.

Those arriving on the later side had to contend with a near-riot outside the new Shangri-La Hotel, when its gates were slammed shut because the crowd inside was already at over-capacity. Invitees like designer Jason Wu, photographer Mario Sorrenti and a gaggle of top models were left clamouring to get in. One bystander likened the scrum to the storming of the Bastille. Eventually, security surrendered to the growing fashion mob, and storm the hotel we did.

Once inside, all the tension seemed to disappear as a who's who of the industry — the men dressed in black tie, the women in gowns and dresses, many fresh off the runway — participated in something like fashion's high-school prom, albeit one with a level of glamour and style you couldn't find anywhere else in the world.

All in all, a wonderful way to cap off a great season.