At Yu Holdings, Building a Bridge of Businesses Between China and the West

Wendy Yu shares how she selects the companies she invests in as part of Yu Holdings’ strategy to capitalise on China’s ‘consumption upgrade’ and increasing international demand for Chinese design.

At Yu Holdings, Building a Bridge of Businesses Between China and the West

Wendy Yu shares how she selects the companies she invests in as part of Yu Holdings’ strategy to capitalise on China’s ‘consumption upgrade’ and increasing international demand for Chinese design.

SHANGHAI, China — Wendy Yu has a unique perspective on the investment opportunities arising out of the creative dialogue between China and the West, in both creative and commercial terms. Positioning her company Yu Capital as a bridge between the two, she has invested in both the opportunities for western brands arising from China’s elevating consumer spending habits and the growing demand for Chinese designed apparel in China and internationally, taking an undisclosed stake in the Mary Katrantzou business and supporting the inaugural BoF China Prize and its winner, Caroline Hu.

Yu’s insight is particularly timely in the context of an evolution in Chinese customer preferences. Dubbed the “Consumption Upgrade” in Beijing and other major consumer cities in China, Chinese consumer tastes and habits are changing across the value spectrum. According to the China Development Forum, consumption makes up nearly 80 percent of China’s GDP growth, up from less than 50 percent eight years ago. Indeed, as disposable income rises and e-commerce eliminates borders, national spending habits are moving en masse into luxury goods, beauty, household products, medical and educational expenses. 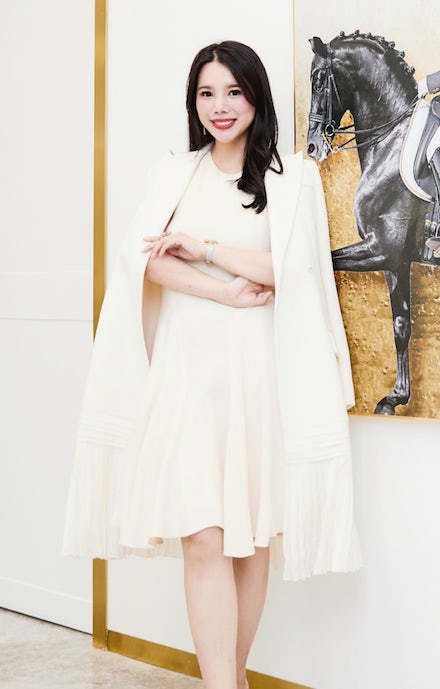 Concurrent to this evolution is a discernible shift in the dialogue between Chinese brands, increasingly creatively confident on the global stage, and their consumers at home and abroad. Today, China and the markets it influences aesthetically contribute much more to the international fashion industry than spending power.

What types of businesses do you look to in building your portfolio?

I like to invest in the ideas that I believe are future-proof — those that also have a sense of meaning to the fashion community as well. I come at investments through the lens of innovation and creativity lying between the East and the West. I focus on where my passions lie: fashion, technology and empowering that cultural exchange. When investing, I have to believe in the long-term vision and for it to have appeal and be scalable in the Chinese market.

What informs your decision-making process when selecting investments?

It changes case-by-case. During a conversation with one of my mentors, I asked him what he believes is the most important attribute for success in a new brand. He said, “Strong creative direction and a strong chief executive.” There must be a uniting vision, powered by a strong operational team. When creativity meets business and these two marry, that's when a brand really flourishes in the long-term.

As a founder, I think if you have the creative capability and a business mind combined, you can go very far. It shouldn’t be just about numbers though, it’s also important to assess a company’s relevance and contribution to the wider eco-system, and how it might be remembered in fashion’s history.

When creativity meets business and these two marry, that's when a brand flourishes in the long-term.

I always evaluate the China angle too and look for investments that have the potential for growth in Asia in the future. With Cefinn for example, there is a strong brand story with Samantha Cameron as the wife of the former British Prime Minister David Cameron. The price point is accessible, which appeals to working women, who now make up 7 percent of the Chinese workforce and are buying into accessible luxury.

What consumers most influence your decisions?

First of all, for me, it’s always about buying into a brand on an emotional level — if the brand has a strong DNA, it can tell its story differently. Then I look at the scalability within the market and in a sector that the young Millennial consumers will be interested in. I really believe that the Millennials and the Gen-Zs are the most powerful group of consumers and so knowing how to communicate in the digital world, being in tune with their shopping behaviour and what they want should ultimately inform the products and the services that the businesses build out.

What emerging Chinese consumer trends do you believe will impact the international market most in the near future?

The rising Millennials, their national pride and how that informs their shopping habits. I very much believe they are going to increasingly seek out and embrace designers who are coming out of China with China-led aesthetics. Even on a personal level, I have noticed that people around me who used to be very loyal to Chanel, Dior, Louis Vuitton, they have started to shop in the ateliers of local Chinese designers.

It’s always about buying into a brand on an emotional level — if the brand has a strong DNA, I can tell its story differently.

Before it was all about Beijing and Shanghai, but now growth is far more in second tier cities like Chengdu, Hangzhou and Tianjin, which have rapidly expanding middle classes and continue to produce first time buyers in luxury goods. They are becoming more and more relevant and important. According to the Boston Consulting Group, over 50 percent of China's luxury consumers spend in the countries with lower tier cities. Recently I made a trip to the beautiful city of Chengdu to speak at the T Magazine conference, where we were discussing how China’s consumer, investment and creative power has evolved. People there are not shopping the big brands at all — instead, independent boutiques are the ones that are thriving.

How do you complete your research?

I’m very privileged to have access to a good network of professionals, so I speak to people in my community who are experts in what they do, and we exchange ideas and act as each others’ sounding boards. Focus groups on the market vision is very important, especially when developing a new product or strategy.

Second, McKinsey, Nielsen and Deloitte issue insightful industry reports, but I don’t believe that by just reading a report, you’ll totally understand the market. Sometimes reports are done by somebody who has maybe been in China for a few years, but they don’t really have that in-depth understanding of the culture and all of its nuances. Lastly, consumer insights from Tencent, Alibaba and Baidu are also a great way to gain an understanding of the unique digitalisation of the market.