MILAN, Italy — “It is time for transparency, it is time to take responsibility,” Carlo Capasa, chairman of the Camera Nazionale della Moda Italiana (CNMI), the governing body of Italian fashion, told BoF at the launch event of its Diversity and Inclusivity Manifesto.

Held in the 150-year-old Teatro Gerolamo, the event consisted of a series of panel talks designed to drive awareness of the need for change within the industry. Speakers including Elena Bonetti, the Italian minister of equal opportunities and family, Chris Richmond Nzi, founder of Mygrants, Rossella Ravagli, the head of corporate sustainability at Gucci, Emanuele Farneti, editor-in-chief of Vogue Italia, Rossella Ceruti, chief operating officer of Pomellato, and muse, model and activist Lea T, shared both personal experiences and data-driven insights on how to effectively address gender equality, and increase inclusivity and diversity in the fashion industry.

“Paradoxically, as the world has become increasingly globalised and interconnected, the fashion industry has struggled to reflect a diversity of ethnic backgrounds, culture and lifestyles among its workforce, particularly at the executive and creative leadership levels,” Capasa shared in his welcome on stage.

The industry struggles to reflect diversity among its workforce, particularly at the executive and creative leadership levels.

“We hope that these principles can establish a basis and a model for radically and authentically reforming the fashion industry. Our system is like a machine sometimes and you need to do the maintenance,” added Capasa. 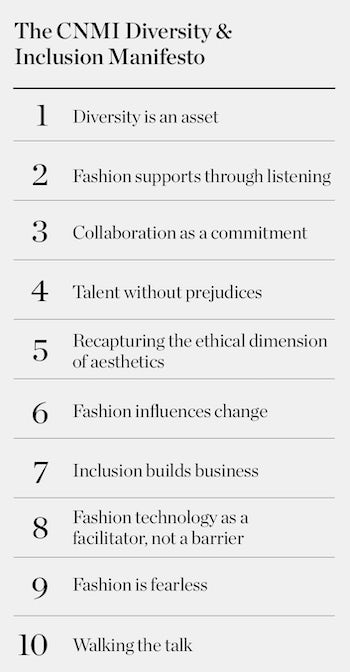 To achieve its goals, the working group sought to address two questions: how a brand’s image communicates diversity through marketing, partnerships and public engagement, and how HR and CSR functions can prioritise and exercise inclusive hiring practices, ongoing education and brand culture.

“People trust fashion as a pioneer and this is the real revolutionary story in fashion today. Before, it was a single brand. Now, we have a table where we all sit together and we say, ‘Let’s change something. Let’s save the planet, let’s take care of the people. Let’s make our business a business that influences culture, let’s make this something that will be a real force for change in the future.' We have [the] opposite response to many politicians today — our response is that we can, and must, do this together,” he continued.

Indeed, Capasa hopes that the manifesto will encourage the international industry to recognise not only a moral imperative for change, but fashion’s unique positioning in effectuating positive impact on a global scale. “We have to be very conscious that we have this huge responsibility, especially with [the] new generations. They are going to be shaped more and more by the values we share [as an industry]. If a brand believes that diversity is something of value, or a brand believes that we need to take care of the planet, that we have to make better work for the world in which we live, consumers will adopt those values,” he told BoF.

Perhaps crucially, unlike many precedential initiatives of its type, the commitment by the brand partners to the manifesto and its principles will be reported on by CNMI, initially on an annual basis. Principle 10 reads: “To begin this work in earnest, CNMI will monitor how brands have started adopting and implementing these 10 principles into their culture and throughout their workforce. It is imperative that D&I is aligned with and integrated into the overall business structure, mission statement and core values of our brand partners.”

Ok, you want a transgender [model]. But how many transgender people are working on set, not in front of the camera?

Indeed, Capasa believes “transparency is the base of everything. To be totally honest, I am a little bit scared due to the scale of responsibility. I do not view this as something easy. I know how difficult it will be. It’s a huge challenge but it’s one we have to take. We must.”

To learn more about the forces demanding change within the industry, BoF sits down with three of the event’s speakers. 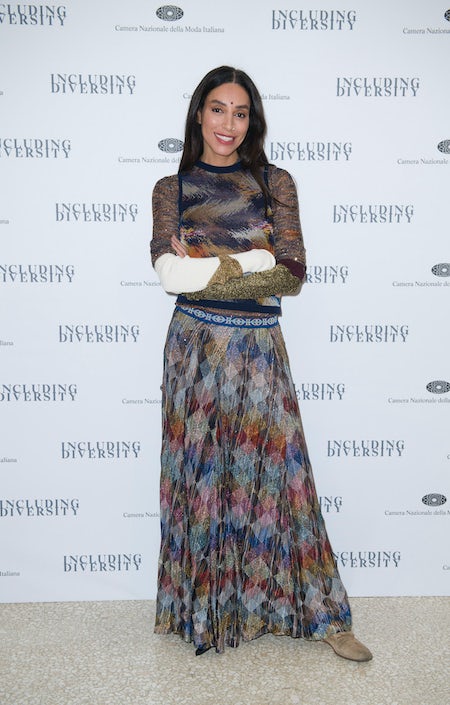 She was cast by her best friend Riccardo Tisci in Givenchy’s Autumn/Winter 2010 campaign, driving industry-wide awareness of the diversity of womanhood — a conversation she has continued to lead on the global stage through her work as the cover star of numerous high-profile publications and as an ambassador for MAC.

What is your experience of fashion and luxury’s attitude towards diversity and inclusivity?

Today in fashion, it cannot only be about hiring a model in a campaign. This is a thing you must start to check now. Ok, you want a transgender [model]. But how many transgender people are working on set, not in front of the camera? How many black or indigenous or Asian people do you actually employ on the set? It’s not only about who is going to be the representative, but it’s about who gets to work on the whole of the project. I cannot feel represented or feel honest empathy if the only diversity is in the campaign and all the people around [me] are white.

How have you seen fashion’s attitude to inclusivity and diversity change?

I don’t believe fashion has chosen to open the doors — I believe it was forced, thanks to the resistance movement. I believe I wouldn’t be here, working in fashion, if it weren't for activists like Angela Davis and bell hooks who started saying it’s only up to them to define who they are and to challenge this reality.

I know who our oppressor is and I’m not scared to fight this kind of man… we just have to stay close to each other. I’m not saying just transgender individuals, not just the whole LGBTQIA+ community — everyone. We’re fighting for our rights, for everyone, including the rights of the white man, who is also, in my opinion, suffering a lot of oppression.

Where should fashion focus its efforts to improve diversity first?

A few years ago, I would say it [was] really important to use a [diverse] model. Now, I want more. Now, I want to see [diversity] on set — I want to see black women and photographers and make-up artists or trans women and men working on the set. I want inclusivity everywhere around me. That is the point. The brands need to start to give jobs [to diverse individuals] not just as models. It’s not like we only want to have the opportunity to be a designer or a photographer. We want to have a chance to go to school and study and be a doctor, whatever it may be. It’s something much bigger. We can start with fashion, of course, but fashion needs to remember — we’re not stopping there. 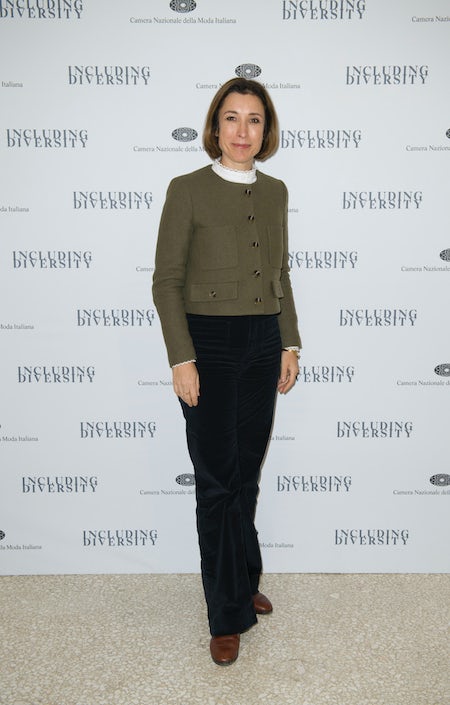 Her work in humanitarian crisis zones began in occupied Palestinian territory in 1998. She was since appointed director general of Amnesty International in Italy.

Why are you working with the fashion industry specifically?

In the world, there are over 71 million displaced people — 86 percent of them are living in low- and middle-income countries in the proximity of the countries they left. So only a small proportion of them are living in Italy. Even in Europe, Italy is not the country where most of the refugees are living. The number one country where refugees live in Europe is Germany. But still, approximately 100,000 refugees are residing in Italy.

The few studies that we have show two things: that a country or society that invests in inclusion — especially in the job market for refugees — receives a very positive impact in terms of gross internal product. Second, we now know that the job inclusion of refugees is more difficult than that of migrants. Why? Because, first of all, refugees do not plan most of the time for the journey. They cannot count on a diaspora that can support them. When they arrive, they often arrive very traumatised, without money — no funds to invest — and with a past that is difficult to process and to live with. It requires very specific interventions and solutions.

To address this, we started a programme within the business community, proposing to many Italian companies that they create tangible initiatives that facilitate the job inclusion of refugees in exchange for recognition from UNHCR. Once we have assessed their efforts, we award them a specific [assignation]. It’s kind of a logo, called “Welcome.”

Today, the Welcome project is already in its third successful year. Each year, there are candidates for the project. Last year, there were 60 candidates; this year, we had 150. We’ve got big companies like Gucci and Roberto Cavalli, but not only from the fashion industry. We also have small companies focusing on sustainability and agriculture — there is a good range of diverse businesses.

What is unique about fashion’s opportunity to help in this scenario?

The fashion industry is a prosperous one. It is growing despite the financial crisis, and it has been very open to the inclusion of refugees. In particular, at [Gucci and Roberto Cavalli], I was very much impressed by not only the companies willingness to employ these refugees, but also their organisation of very specific initiatives that allowed staff to learn from the experiences of the refugees.

Bringing these refugees into the company has a very positive impact in terms of creativity and in terms of the morale of the company. A number of businesses included refugees together with interns because they were of the same age. They had a very specific idea of how to make their lives better, but at the same time, how to let the rest of the company and the staff benefit from this unique experience.

Where should fashion focus its attention moving forward?

I can see that, globally, fashion needs diversity and creativity, and that increasingly, from my perception at least, fashion companies are looking at the south of the world as well. Since most refugees live in the south[ern] hemisphere, with millions of individuals in Africa (and a majority are not living in camps but are living in urban areas), I think companies should see that as a huge opportunity to train and include refugees. 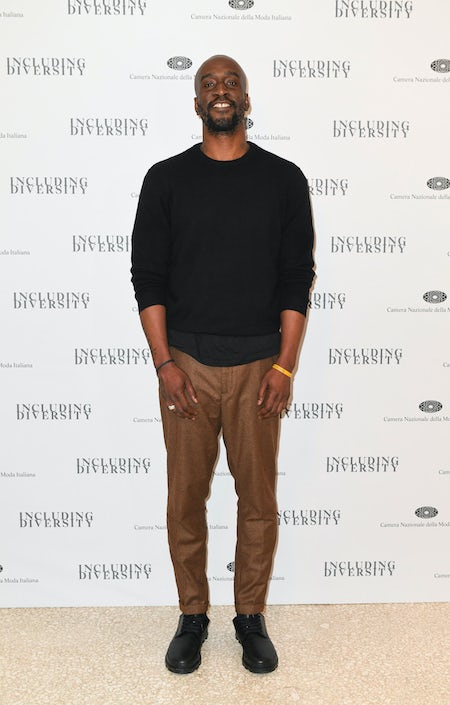 He founded his “micro-learning” app in 2017, with the mission of supporting migrants to “emerge from dependence and achieve real emancipation” through identification, development and job market application of both soft and hard skills.

How can fashion better support migrant and refugee communities?

First of all, we need to recognise that migrants and refugees do possess skills. The [next] step is identifying what those skills are that could be useful for the industry. [In our app-based community,] we have some tailors, for example, so we need to provide them with the opportunity to show third parties what they can do and the scope of their skills. The problem that they have is that they don’t know where to look and how to express their potential to the industry. There are some great examples in Europe like the designer Stella Jean, but we need other inspirational figures for the community to look up to. We need to open the doors of the industry.

What are the potential steps that companies could take in becoming more accessible?

What about promoting an open call for talent? Give migrants the opportunity to present what they have done and what they would like to do, creating interesting access to more talent and enabling companies to incorporate more diverse forms of creativity. Similarly, what if a fashion company actually hired a migrant to work in their activities? That could be very powerful. [It would send] a clear message to migrants and refugees that they could reach that destination and real emancipation in the end. This is something that has never happened [to date].

What is unique about fashion’s opportunity to help in this scenario?

Fashion can change behaviours and thoughts. This is a very powerful industry. I work with a number of industries and this opportunity, this movement in fashion, it feels different.

To discover more about the CNMI’s Inclusivity and Diversity Manifesto, click here. This feature was sponsored by the Camera Nazionale della Moda Italiana, as part of BoF media partnership.