As investors at Fosun Group continue to leverage China’s cultural capital, the group celebrates the first anniversary of the Fosun Foundation Shanghai landmark.

As investors at Fosun Group continue to leverage China’s cultural capital, the group celebrates the first anniversary of the Fosun Foundation Shanghai landmark.

SHANGHAI, China — Located in the heart of the Bund is an impressive architectural feat which holds its own against the countless buildings that make up Shanghai’s iconic skyline. The structure, an opulent golden exterior encased in a three-layered rotating curtain design, is home to Fosun Group’s Fosun Foundation Shanghai.

A collaboration between architecture firm Foster+Partners and Heatherwick Studio, the building was the official venue partner for the recent BoF China Summit and is a symbol of the growing willingness of China’s corporate leaders to invest in culture. The foundation itself was launched in 2012, several years before the landmark’s completion, just when Fosun Group celebrated its twentieth anniversary.

“We started Fosun Foundation Shanghai in 2016 as a non-profit that opened in the Bund Finance Center,” Wang Jinyuan, president of Fosun Foundation, told BoF. “It infuses heritage and modernity in one interdisciplinary art centre, reaching audiences in Shanghai, across China, and around the world.”

The Fosun Group is one of China’s largest conglomerates, with an investment arm that is increasingly active across the global fashion industry. Spanning business sectors as varied as asset management, insurance, industrial operations, healthcare and property development, it has become one of the largest integrated holding companies operating from Mainland China. As of 30th June 2017, the group’s total assets exceed $75 billion. 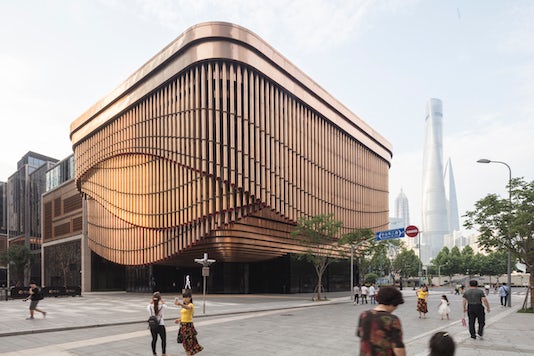 The group’s foray into fashion began in 2011, when it acquired a stake in Greek jewellery brand Folli Follie which was regarded as a bold move and one that was ahead of its time for a Chinese firm. Fosun followed this in 2013 with investments in Italian tailoring brand Caruso and St. John, the American heritage knitwear brand.

But the group soon recognised the power of culture capital in business. Since it began supporting culture and the arts through the Fosun Foundation, the group’s landmark building has seen solo exhibitions by the likes of Qiu Anxiong and Julian Opie. The foundation offers Chinese artists an international platform to feature their work while creating archives of their artwork. The foundation also promotes Chinese culture abroad, from traditional wood-carving art to the Shanghai Symphony Orchestra.

Hosting public talks, performances, education programming and screenings in its landmark golden building, the foundation has begun brokering partnerships with other institutions and organisations abroad – the inaugural edition of the BoF China Summit is one example – and it is also planning to stage fashion shows in the future.

“Based on the Bund [in Shanghai], the Fosun Foundation has a unique geographical location to capitalise on this great heritage,” says Wang. But with further locations on the horizon, the foundation is looking to connect other regions of China with leading art and cultural institutions around the world, fostering a more globally-minded creative ecosystem.

“I believe we can contribute to the development of art and culture both in Shanghai and China, and in the process, it can make an impact on other Chinese areas of enterprise,” Wang concludes.

Fosun Foundation was the Venue Partner of the inaugural BoF China Summit.