MILAN, Italy — The story is well known: a young renegade designer — barely out of school, full of ideas but without much of a business plan — attracts the attention of the fashion press and is catapulted into the spotlight. High-end retailers come knocking. But far too often, the hype is short-lived, the lack of business strategy becomes apparent, production falters and the venture folds.

Design duo Luca Lin and Galib Gassanoff of Act N.1, one of the most dynamic young labels to emerge from Milan’s recent fashion renaissance, are determined to pursue another path, marrying creative invention with a knack for commerce: three years after launch, the brand is profitable and generated revenues of €1.2 million in 2018, up 20 percent over the previous year. Small, but healthy.

Their workspace, on the outskirts of Milan, occupies a former recording studio, hidden in a courtyard, where Lin and Gassanoff work long hours with a team of nine people. It’s far from the run-down quarters one often associates with young designers. Instead, the spacious, whitewashed space smacks of professionalism and, dare I say, money, even though Act N.1 is self-financed.

“Our parents helped us to start it all in the first season,” said Lin, who was born in Reggio Emilia to a Chinese family. “After that, we have kept reinvesting into the label every penny that we earned from the sales of the previous collection. It’s an endless cycle that nonetheless keeps us afloat.”

The beating heart of the Act N.1 offices is the atelier, which is located in what was actually the recording room. “It is so very silent: seamstresses work all day long and we don’t hear any noise,” said Gassanoff, who hails from Georgia but is of Azerbaijani origin and came to Italy on a student grant. “It is in that room that everything we do comes to life. We like to work on the actual pieces, in 3D, building items as we go along — cutting a sleeve here, attaching a flap there — as we barely draw the silhouettes at the very beginning of the creative process.”

“We could not have it in any other way,” added Lin. “Our method is really hands-on. We cut and sew the samples of our first collections by ourselves. As soon as we started growing, developing an internal atelier became mandatory. We need to have everything in our control.”

Lin and Gassanoff launched Act N.1 in 2016. “The name Act N.1 comes from this idea of using the memories of our infancies as a prime source of inspiration. Infancy, to us, is the first act of life,” explained Lin. The concept has translated into a layered, multicultural aesthetic that accentuates the junctions between contrasting elements — ripped, frayed, held together roughly with metal rings — rather than hiding them. Their pieces are punk yet precious; peculiar but not abstruse; a mix of exquisite and rough, with a modern sense of ease. Delicate painted silks are cut into structured coats or liquid peignoirs; pleated ruffles are attached to hooded sweatshirts elongated to form ethereal dresses; oversized men’s shirts are spliced, doubled, darted or morphed with silk slip dresses. “Hybrid garments and shirts are what the buyers keep asking us for,” said Lin.

There are similarities between Act N.1 and what Demna Gvasalia did at Vetements: the frumpy dresses, the masculine shirts. But Lin and Gassanoff have found a voice that’s uniquely their own. 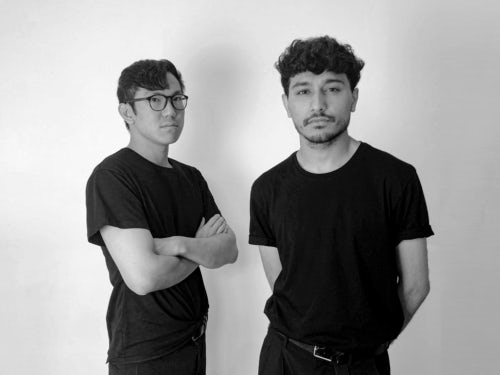 “My parents are obsessed with Chinese antiques, and I grew up surrounded with watercolours and lacquers, which form the basis of our prints,” said Lin, explaining the multicultural dimension to the label, a rarity in Milan. Gassanoff’s Azerbaijani contribution is evident in the heavy layering and sense of craft. What works best, however, is the duo’s use of metalware, in particular, the chromed hooks that are used to gather volumes on dresses and shirts, and that turn into nose rings for the show. “Using metal is for us a way to add a rough touch to what we do, allowing customers to play with items and to reconfigure them,” said Gassanoff.

Act N.1 has been picked up by over seventy retailers, including Selfridges, Tsum, Luisa Via Roma, I.T, Tomorrowland and H Lorenzo. Along with a strong aesthetic, accessible pricing is part of the appeal. T-shirts go for €150 euros, shirts for €450, with dresses around €800 and coats at €1800.

Their breakthrough came in 2017, when the duo won Italian Vogue’s “Who Is On Next?” fashion contest and began working with Riccardo Grassi’s showroom, which operates out of Milan and Paris. “I was struck by Luca and Galib’s tenacity and stubbornness, as well as by the clarity of their vision,” said Grassi. “As a label, Act N.1 is full of potential, not least because of its unmistakable signature. But they have to work a little harder, in my opinion, on communication.”

Lin and Gassanov can be heavy-handed when it comes to their shows: they like drama and bold looks, and that has been critical to generating attention. And yet the storytelling is always equally present in their clothing and that’s what gives substance to their work.

“We are building our little world one piece at a time,” said Lin, who promises a water-themed show for the label’s Spring/Summer 2020 show on Thursday.

“The next step will be developing a fully formed line of shoes, and after that menswear will be next,” added Gassanoff. “There is a lot of unisex pieces already in our offering, but we are convinced that our aesthetic can easily translate into proper menswear. We’re constantly holed up here, working in isolation far from the fashion crowd, and enjoying every minute of it.”