This month, our Spotlight shines on New York-based designer Andrea Jiapei Li, whose impeccable construction and play on proportions caught the eye of Dover Street Market.

NEW YORK, United States — When Björk stepped onto the stage at Barcelona’s Poble Espanyol museum in July 2015 as part of her “Vulnicura” worldwide tour, all eyes were on the popular Icelandic singer who wore an unconventional karate belt-woven baby blue top, paired with flared trousers. Images of the musician were instantly shared on blogs and music websites across the globe, turning Andrea Jiapei Li — the designer behind Björk’s unique look — into an overnight success.

Having only launched her label in 2014, Li is a new face among the crop of young Chinese designers who have begun to establish themselves in major fashion capitals, from breakout stars like outré knitwear designer Xiao Li, who was shortlisted for the LVMH prize in 2015, to more recognised names like Huishan Zhang, who made his London Fashion Week debut in 2012, and Uma Wang, who has showcased catwalk collections in London, Paris and Milan since launching her label in 2005. 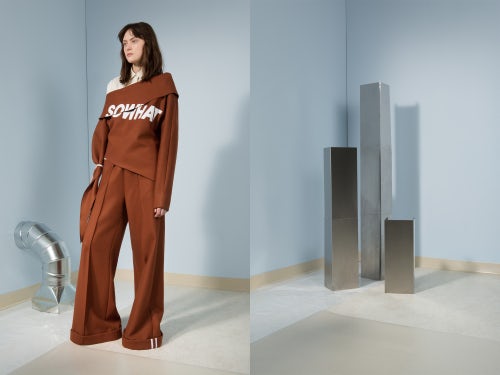 But the 26-year-old Beijing-born designer is catching up fast. Last year, Li was nominated for the H&M Design Award 2017, and shortly after, made her New York Fashion Week debut with VFiles, a social platform with an e-commerce arm, where she is now stocked. In February 2015, she was listed as a finalist for the second LVMH Prize, and in September later that year, showed her third-ever collection as part of IMG’s Made Fashion Week. Since then she has also dressed top acts such as Lady Gaga and Rihanna.

“I don’t really pay much attention to these things. You find out this kind of news after it happens. It’s not what I focus on,” Li says. “For me, what makes me happy is seeing my customers with a satisfied look after they try on clothes in my shop, almost as if they understand the meaning behind my designs. Now that’s exciting.”

After graduating from the Beijing Institute of Fashion Technology, Li moved to New York for Parson’s MFA fashion design programme where she studied under revered tutor Shelley Fox — an experience which she says opened her eyes to a new world of western fashion. “Compared to China, people here have a more powerful and unconstrained style,” she says. “They pay more attention to expressing personal opinion and an identity. Teachers help provide direction without limiting you too much.”

Creating a brand is an easy thing. The most important thing is its long-term development.

During her studies, Li took on internships at Edun, Diane von Furstenberg and 3.1 Phillip Lim. It wasn’t her intention to launch a label immediately after school, but her Spring 2015 graduate collection was spotted by Dover Street Market and her designs were subsequently stocked at the concept store in New York. “For me, this has been very natural,” says Li. “Every day feels fresh, and with each stage, there’s still something new for me to learn. I’ve never thought, ‘Once I finish this stage, then I’ll be done thinking.’ This is what gives me the strength to keep moving forward.”

For her Autumn/Winter 2016 collection, titled “Back in the Day,” Li toyed with playful silhouettes, including oversized sleeves and floor-skimming trousers. Knee patches were cut out and slogans “So What” and “Back In The Day” were emblazoned across tops and jackets. “My clothes don’t entirely aim to make someone more beautiful. But I hope people are comfortable when they are wearing them — not only physically comfortable, but psychologically comfortable,” she says. “I want to make people relax and feel happiness from the inside, while still looking very cool on the outside.”

Speaking of her product development and manufacturing, which takes place in New York, “taking risks” are two words that frequently arise. “I love to use different and new technologies to play with fabrics. For instance, I’ve been using all sorts of sports fabrics and they are all specially processed,” Li explains. “The stripes from my collection this season were done through screen printing. When we first started to work with the factory, they found it difficult to accept the new ideas and techniques we were proposing. But now, after collaborating for two or three seasons, they are gradually starting to understand what we do.”

Like many young designers, Li recognises the challenges in building global awareness and sustaining her label. "Creating a brand is a very easy thing. Even running it for a year or two is not a problem,” she says. “The most important thing is its long-term development in five or 10 years or even longer. I need to keep bringing people new ideas and fun things.”

Nonetheless, Li has won the support of nine international stockists, from Dover Street Market and VFiles in New York to Henrik Vibskov’s boutique in Copenhagen, Boon The Shop in Seoul, Gem in Taiwan, I.T in Hong Kong, H. Lorenzo in Los Angeles, and, as of last autumn, Dong Liang in both Beijing and Shanghai. "Andrea’s design is contemporary and futuristic. We appreciate her design ability, unified vision and the minimalistic but sharp features [of her designs]. What’s more, her vision is international and modern,” Dong Liang co-founder, buyer and sales director Charles Wang tells BoF.

For this month’s Spotlight, Li has designed a custom BoF logo that includes part of a design from her latest collection. “It represents the playful, whimsical and elegant spirit that we strive to convey through our work,” she says. Looking ahead, Li is keen to introduce new product categories. “In recent collections, we have shown one-off bag styles and collaborated on shoes. I plan to continue adding designs in these categories, as my aesthetic can be translated into design beyond clothes.”