Seoul-born designer Rejina Pyo combines graphic inspirations from abstract art with an elegant, subtle femininity for a winning collection of deceptively simple, contemporary-priced pieces that have struck a chord with influential retailers.

LONDON, United Kingdom — Amidst the sea of "painterly" collections and art-meets-fashion mash-ups of recent seasons, womenswear designer Rejina Pyo offers a calming wave of thoughtful elegance that is certainly quieter in temperament, but no less artful. And with only two seasons under her belt, the Central Saint Martins-trained Pyo has already attracted orders from influential retailers like Net-a-Porter, Harvey Nichols, Sham Kar Wai's Hong Kong-based fashion group I.T Limited, and luxury e-tailer Avenue 32.

“Rejina has been on my radar for a couple of seasons. When most emerging designers initially work to the notion that more is more, I was impressed by Rejina’s confidence to keep everything quite pared back,” Shereen Basma, senior buyer at Harvey Nichols for women’s contemporary brands, told BoF. “This season, especially, I thought the collection had a really fresh take on the season – understated with relaxed proportions, but keeping everything fresh with quirky colour combinations.” 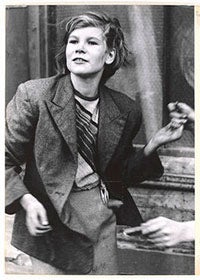 Guided by a 1957 photograph of a girl doing the jive by British photographer Roger Mayne, Pyo’s contemporary Autumn/Winter 2014 collection juxtaposes easy shapes with unusual fabric combinations, held together with a recurring parallelogram motif and just a touch of deconstruction.

“Nowadays when you think of standard manufactured garments, they have all these perfectly lined [insides] and you don’t see any deconstruction inside, but when it meets high fashion you kind of show the opposite,” Pyo explains, unbuttoning a coat to reveal an interior with crisscrossing lines of stitches. “This is the effort that we made for this coat, [and] it actually takes much more time than just lining properly.”

Playful elements like her peek-a-boo, neon-orange pocket linings and detachable belts are indicative of Pyo’s design philosophy: “I think it’s nice that it doesn’t have to be screaming loud. I’m wearing this brand, but, then, if it gives enough joy for someone who is actually wearing it, I think that’s really nice,” she says. “I like the idea of giving the wearer some room to play.”

Growing up in Seoul, South Korea, Pyo has long harboured a fascination with fashion and art, pilfering her mother’s sketchbook from her own days as a fashion designer. “She would always hide it, because she didn’t want me to be a fashion designer!” Pyo laughs. There was also a time when, desperate to wear a lace veil known as a mantilla to church, but not yet of age, she improvised with a crochet tissue box cover.

After graduating from art school in Seoul, Pyo began working at a large Korean fashion group. But with five or six brands under its umbrella and no fewer than 40 designers on its creative team, the company began to feel too anonymous and impersonal for Pyo, who decamped for Central Saint Martins in London. After an intensive, year-long graduate diploma course — which she now teaches — Pyo was accepted onto the school's famed MA fashion course.

“I say to everyone, maybe one thing you can compare it to is the army, because after the course everyone is kind of bonded together with this experience,” she says, with a smile. As someone who thrives under pressure, Pyo collaborated with H&M’s Weekday brand on a 5,000-piece limited collection, sold in over 30 stores across northern Europe, before even graduating.

Her graduate collection, inspired by the Japanese wood sculptor Isamu Noguchi, caught the attention of Vassilis Zidianakis, curator of Greek cultural organisation Atopos, who selected her work for inclusion in its 2011 "Arghhh! Monsters in Fashion" exhibition at the Benaki museum in Athens. Then, in 2012, Pyo won the Han Nefkens Fashion Award.

“In July, I got a call while I was working like crazy before fashion week,” recalls Pyo, who at the time was working as Roksanda Ilincic’s first assistant. "‘Congratulations, you won this money and you’re going to get to do this exhibition!’ I checked the number and it was from the Netherlands and I was like, ‘What, are you scamming artists internationally these days?’” Pyo recalls, cringing. (She later sent an apology email.)

A panel of judges, including designers Viktor Horsting and Rolf Snoeren and Penny Martin, editor of The Gentlewoman, had awarded her the prize, which included an exhibition at the Museum Boijmans Van Beuningen in Rotterdam.

Perennially inspired by American painter, sculptor, and printmaker Ellsworth Kelly as well as contemporary artists like Isa Genzken and Jessica Stockholder, Pyo says, “If I wasn’t becoming a fashion designer, I would [want] to be an artist.”

For this month’s Spotlight, Pyo has designed a custom BoF logo featuring the parallelogram motif that threads through her Autumn/Winter collection, here in a shade of fuchsia pink. "I chose to design the logo with this graphic pink parallelogram shape, as it at once references the abstract paintings that are my constant source of inspiration, and also the main theme of the collection, as most pieces have some variation of this shape within the design. It is confident and graphic, yet also elegant and feminine," she says.

As her brand gathers momentum, Pyo makes it clear that she is aiming for longevity over scale. “It’s not important to me — being big. I like to be focused and be timeless, so it kind of lasts. All the great brands have their signature. I guess that comes after you’ve been doing it for like 10 years. I want to take it slowly — almost like my lifelong project."