Teaming up with sportswear giant Adidas has given the Japanese workwear label a global platform for its utilitarian garments.

“I’ve always been excited by vintage clothes, particularly workwear, military uniforms and sportswear. I would get especially attached to certain pieces, typically those with impeccable detailing,” says Ode, who hails from the city of Kiryū in Gunma, Japan. “Yukiko often wears men’s military pieces in smaller sizes or has them tailored to fit,” concurs Yoshihara, a Tokyo native. 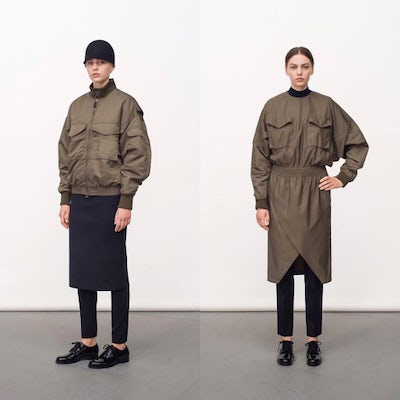 The couple’s fondness for classic, traditional clothes led to the launch of fashion brand Green in 1998, which became a local favourite. “We wanted to create a new collection that drew inspiration from vintage pieces. Clothing like that just didn’t exist,” says Ode. “We wanted to mimic the fabrications, details and silhouettes that we loved so much from these classic styles and revise them for women.”

However, the designers closed the label to take time out to start a family. “We thought that one of us could focus on the children, while the other ran the business, but eventually we realised that we could only do the collection completely in tandem. It would have lost its heart, so we both took a break,” Yoshihara explains.

In 2013, the duo made their return to fashion with a new label: Hyke. “As our kids got a bit older, we [were ready] to go back to work,” says Ode. The name ‘Hyke’ is comprised of the family's initials. “Green had relationships [with suppliers and factories] and reached momentum when it was put on hold. With Hyke, we knew those things would need to be rebuilt.”

Within a year of launching Hyke, Adidas, which had previously created design collaborations with Opening Ceremony, Yohji Yamamoto’s Y3 and streetwear label Palace, approached the designers to collaborate on the Adidas Originals range. “We are Adidas fans. Yukiko, in particular, is obsessed with Stan Smiths. We immediately wanted to accept the opportunity, but we had to think objectively about creating something mutually beneficial and true to both brands,” says Yoshihara. The collaboration, which ran for two seasons (Spring/Summer and Autumn/Winter 2015), exposed the label to new, global audiences, while offering limited-edition pieces to their core customers in Japan.

Today, Hyke has the support of some of Japan’s most sought-after stockists, including Barneys, Isetan, Ron Herman, United Arrows and Tomorrowland, as well as I.T in Hong Kong and directional Korean retailer Boon the Shop. The brand has 75 stockists in Asia and eight in the rest of the world, including the boutiques By George in Austin, Texas, Ssense in Canada and Cose Cremona and Lattuada in Italy, the latter of which has signed on for Spring/Summer 2016.

For this month’s spotlight, Hyke has designed a custom BoF logo featuring buttons used to make military garments that represent “the minimalism and functionality of military uniforms, which is what we most often look to for inspiration,” says Yoshihara. “Vintage uniforms used the most innovative technologies of their periods. When we design, we want to retain their best elements, but make the pieces even more beautiful and modern, using incredible fabric and technologies that weren’t available during that time.”

Looking forward, Yoshihara and Ode plan to grow their business outside of Japan. “Since Spring/Summer 2016, we have expanded — and hope to continue expanding — our activities outside into the non-Asian, international market,” says Yoshihara. As for Green, there are no plans to revive the shuttered line. “There’s no way to know how Green would have evolved, but the truth is that it would probably look a lot like Hyke. Our tastes never change and our mentality remains continuous.”